I asked a question on Stack Overflow: Refactoring and creating seperate methods.

However, my Stack Overflow account is suspended recently for 7 days, and the suspension still has 5 more days to end.And I know I can't vote, ask, answer or comment as pointed on A Day in the Penalty Box by Mr.Atwood with the sentence below.

You will be unable to vote, ask, answer, or comment.

rejection which can be seen below with a screenshot. 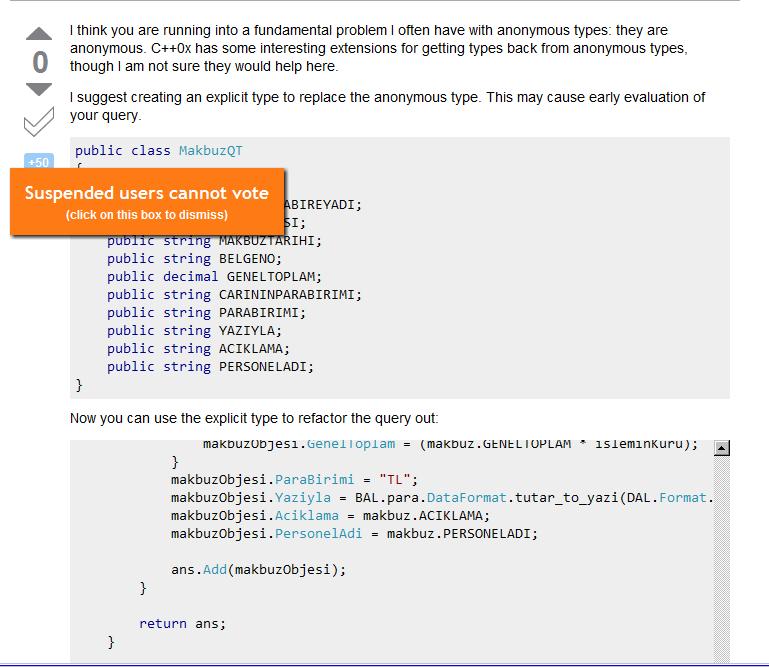 If you do not award your bounty within 7 days, the highest voted answer created after the bounty started with at least 2 upvotes will be awarded half the bounty amount.

None of the answer given to my question is upvoted and the answer I mentioned is not the oldest one after the bounty started so it won't be awarded by community.

What can I do? (except being a good guy and not get suspended :))

In my opinion, it's too much of a corner case to address it in code. Perhaps someone on the team can reset the bounty expiration to after the suspension expires. I'd send a note to team@stackoverflow.com (perhaps pointing them to this question), though I suspect they'll see it here anyway.

We have said this before, I will say it again.

We do not intend to put any extra effort supporting outlier users that have abused the system. Consider being unable to assign a bounty part of your "punishment".

Not the answer you're looking for? Browse other questions tagged support status-declined bounties account-suspension .

144
Remove the shortened URL from the Post-Ban-Message
14
Can a user accept answers during a suspension?
7
Will bounty rolled back if user removed or suspended?
32
I can see my reputation "increasing" even though I am suspended
14
Move question ban FAQ page somewhere else
-1
14 days of suspension
5
Bounties not awarded because user was suspended. Top answers posted "before" are ignored by SE

596
How does the bounty system work?
401
Add a way for moderators to cast a normal, non binding close/open vote
37
Add popup alert box to choose bounty award when accepting the answer on bounty question
47
A grace period of one day to award the bounty after expiration (without remaining featured, of course)
72
Do not implicitly award bounty to an answer that has been downvoted by the investor
276
Let's disallow moderator nominations from people who've been suspended in the past year
6
Can a bounty be awarded to a temporarily suspended user?
312
Was the retroactive change to CC BY-SA 4.0 approved by Stack Exchange's lawyers?
985
Firing Community Managers: Stack Exchange is not interested in cooperating with the community, is it?