Whats up with my rep today? I started off this morning with negative reputation

Earlier today I opened the activity tick box next to my name and saw that I had so far accrued -15 reputation, however the reputation tab listed zero activity for the day so far and I haven't gotten a downvote in about a week. (I didn't take a screenshot but I think you can imagine what it might have looked like)

Now I appear to have hit the rep cap for the day, however the activity box and reputation graph shows me as having gained only 205 reputation instead of the full 215 (I have one accepted answer)

Also it shows me as having gotten 0 reputation gain for an answer - surely that should have been supressed if I actually got 0 reputation? 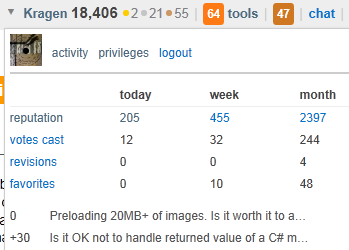 Note that I've already done a rep recalc today, it did something, but it didn't fix things completely.

BTW I'm just reporting this as a bug - I'm not overly concerned with the reputation loss! :-)

This happens when a vote is reversed, like an upvote or an accepted answer.

Not the answer you're looking for? Browse other questions tagged bug status-bydesign reputation .

1
Why am I sometimes not able to get full 200 rep (not counting accepts)?

17
Bugs with Profile Reputation Graph
4
Not getting reputation points for up votes on SO today for some reason. What's up?
7
How does this user have only one rep?
30
Different colors for different rep types in the new reputation graph
3
How much rep have I earned today?
1
More rep today than this week?
533
Recent Reputation History Changes