What is the rationale behind that the flag score increase is non-linear after reaching 500? [closed]

Ask Question
Asked 8 years, 6 months ago
Active 8 years, 1 month ago
Viewed 268 times
5
Closed. This question is off-topic. It is not currently accepting answers.

I am just confused with the flag score?

Why the flag score increase is non-linear after 500? I know there is a max cap score of 750.

Why don't just make it as linear and increase the max cap, say 2000?

Lets start by looking at a graph of the flag weight for 6 imaginary individuals flagging 400 times at various success rates.

(because I don't know the actual algorithm used, I'm going to assume each successful post-flag above 500 will increase the flag weight by 10 * (750-weight) / 250. That should be close enough for our purposes.) 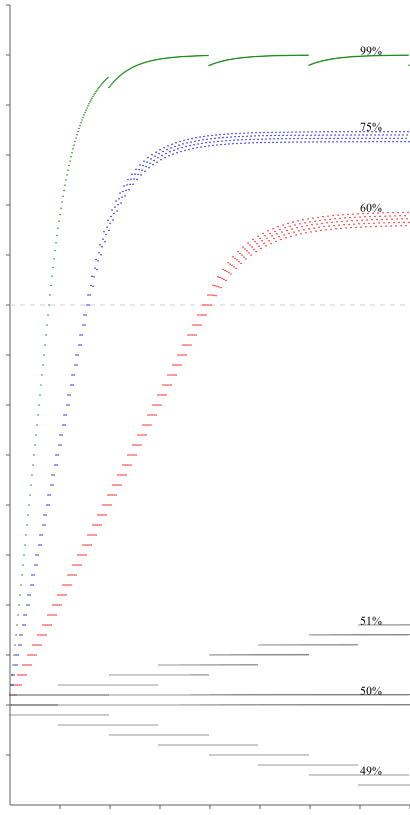 As you can see, anyone with a success rate over 50% will eventually reach 500. Once our imaginary people pass 500, their flag weight starts to plateau at various levels depending on their success rates. If the cost-reward was symmetric then we everyone over 51% would eventually meet up again at the top.

For simplicity, the graph assumes that people flag consistently with their good and bad flags evenly distributed. In reality, there will be some local variations and some people will change their ways (for better or worse). I found that the flag weight continues to (roughly) track the same path even with small local variations, but a sustained change will cause the flag weight to find a new plateau. 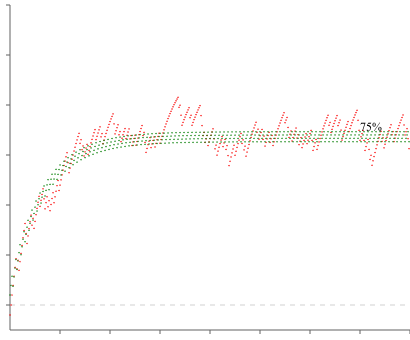 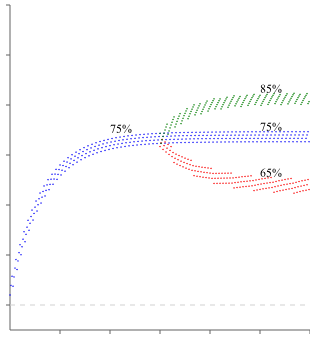 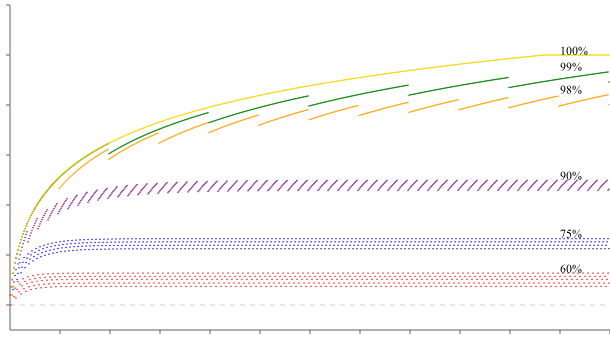 The overall result is mostly the same but with more differentiation in the upper regions.

Although its not shown in this graph, the 99% user will still hit the 750 cap in a little under 800 flags past the end of the graph, whereas the 98% user will not reach 716.3. However, I'm not sure such specific details are particularly meaningful in the real world ... except perhaps to determine the minimum number of consecutive successes required between each failure to guarantee some sort of "forward motion" (probably just short of 99).

The idea is that this way your flag weight will always approach a certain number depending on the current success rate of your flagging.

Brian's answer here has some great graphs that explain the concept really well. Have a look at it.

Speculations about the formula are in What's the flag weight formula in the 500-750 range?. The rationale is basically "with greater power comes greater responsibility." Once you're established as a good flagger, another good flag doesn't provide much more information about how good a flagger you are.

Not the answer you're looking for? Browse other questions tagged discussion flag-weight .

42
How many flags to reach 750 flag-weight?
15
Unnecessary precision displayed for flag weight
22
What's the flag weight formula in the 500-750 range?
6
Why is there a limit on number of posts I can flag?
8
How do I know if I am flagging correctly?

1389
Fastest Gun in the West Problem
1758
Could we please be a bit nicer to new users?
81
We don't need (to see) flag weight!
635
Your answer is in another castle: when is an answer not an answer?
2753
A Terms of Service update restricting companies that scrape your profile information without your permission
2260
Firing mods and forced relicensing: is Stack Exchange still interested in cooperating with the community?
1877
Stack Overflow is doing me ongoing harm; it's time to fix it!
469
To reach out: on Monica, the Lavender community, and the future of the Stack Exchange network