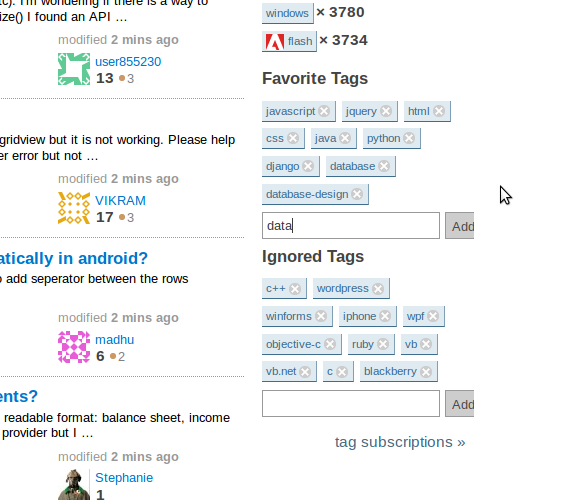 That's Firefox 5 on Ubuntu 11.04. It could be that I don't have the intended font and may be falling back to one that has different character widths?

Specified font family: Trebuchet MS,Liberation Sans,DejaVu Sans,sans-serif. It appears to be attempting to use Liberation Sans. When I remove that using firebug, it gets even worse (presumably because it uses the even wider OS default).

Ubuntu doesn't appear to be doing any sneaky swapping of fonts:

Not a huge problem, but I thought I ought to point it out.

I dont think its only caused by the font, Ive got the same error on 2 diffrent Windows-computer with 2 diffrent browsers and both got the standard fonts. For me i solved this problem temporarily with adding 10 px width to the content and sidebar div via greasemonkey script. Or you could change the padding of the Add button to: padding: 0.3em 0.2em; so its not that widt that it gets cut off.

Not the answer you're looking for? Browse other questions tagged bug ignored-tags design favorite-tags .

13
Easier way to add a FAVOURITE or IGNORE Tag
6
Adding tags as ignored, from tag pages
4
Inconsistent behavior when adding duplicate tag into Favorites/Ignored Tags List
12
Fonts and the new Q&A theming
12
“Type a tag” text cut off
9
Why do some parts of the standard theme use different fonts than the rest of the site?