Can the Ask Question page be changed to obtain better quality questions?

I would love to see more useful questions and don't think the new About page will help; so, I have worked out a more effective "Ask Question" page that solves lots of problems more effective:

Have you ever tried to fill in a survey where each box is accompanied with at most a single word? That’s not constructive. 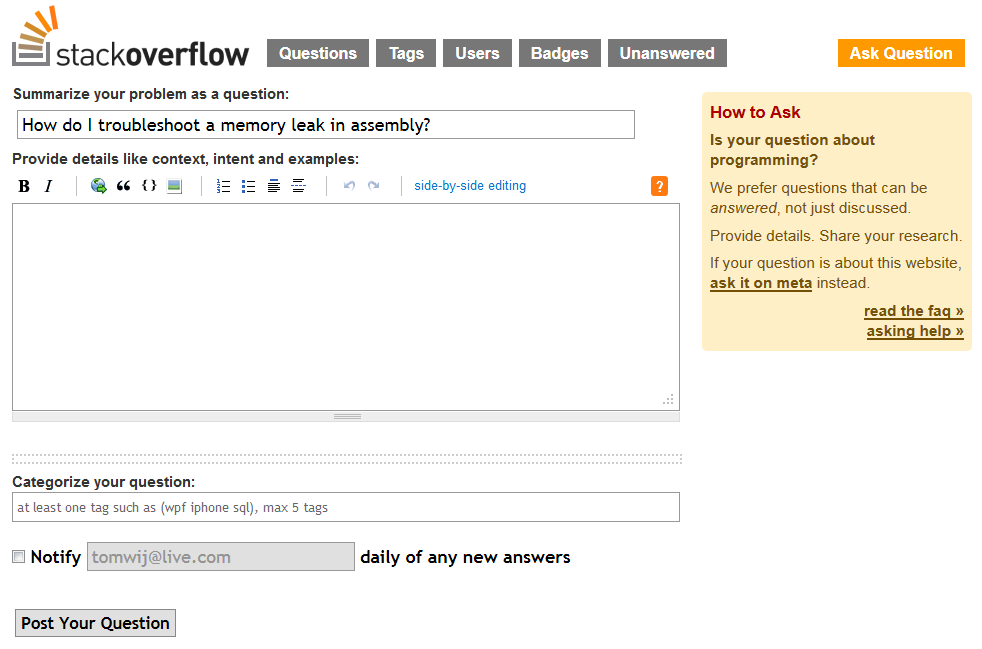 Not seen above is that the question box would show an example of an actual title in grey.

While I believe that bad users will be bad users, a lot of the comments here are merely anecdotal and highly prejudiced. It's one thing to say, "Yeah, I've seen this happen a lot online and users hardly read instructions", but to dismiss a suggestion solely because of prior experiences is wrong. I'll admit that certain requests are downright ludicrous and should be summarily dismissed; but this one isn't, and is relatively simple to implement.

In response to Cody Gray's post about signing the agreement/guidelines and similar sentiments in the comments, I simply ask everyone to consider the following:

The current guidelines/agreement linked in Cody's post is the equivalent of a software license agreement, and it merely stands in the way of a desperate user (these are the ones with the most violations) and they simply couldn't care less as to what it says. Tom's suggestion here is to make the guidelines more direct, concise and closer to the actual field where it is applicable. The information can be grasped in a single glance and might actually improve the quality.

Also, the agreement is shown only once, when you first ask a question. So if a user dismisses it once, they're never going to see it again and they're bound to remain confused as to why the community hates their questions. If Tom's suggestion is implemented, it should come with a caveat that it will be shown to users until they get a minimum of X rep on each of Y posts and at least Z rep in total (could be questions or answers, so as to not annoy those who answer more than ask and to not aid single run-away fluke questions).

It wouldn't hurt to at least try this out on SO and see if it improves the quality of the posts†. Of course, we would have to come up with a suitable metric to determine if there's been an improvement, but we can address that later, if this is gets that far.

†I heard bold text is in vogue these days

My issue with the suggestions here is that they add more words to the page.

If the user is so dense that can't understand what "title:" means, I'm not convinced that changing it to "summarize your problem as a question:" is going to help ... anyone.

Also, there is already help present in the fields:

So piling even more text on the page is simply not the right way to reach users who don't read anything.

While I agree with Tim and others that a lot of users are plain apathetic, I think it can't hurt to improve the wording on things anyway.

Stack Exchange is not always new-user friendly and in my experience communities aren't very forgiving to questions that aren't phrased "just so". That can be intimidating. Especially as we move away from the technical programmer crowd and attract more users from other fields, it really can't hurt to be a little more clear on what likely is the first form a new user comes across.

I'm not fully in agreement with the wording changes proposed here. For one, I think it's fine to keep "title" instead of going for some variation of "concise description". But I support adding some guidance around tags, the preview pane, and possibly the question body itself.

Tl;dr: there's no harm in making wording better. It's a small change and it won't stop every bad question, but that's okay. Sure, this is the Internet and so on, but aren't we trying to make the Internet better?

Ask the user for [...] An actual question instead of topics or a title.

This has been suggested a few times... You linked to one of them. I'm in favor of this, although I think editing titles to provide good, visible examples of what they should look like is more effective. The biggest problem with titles is often not that they're titular, but that they're vague or completely meaningless.

Ask the user for [...] Actual context and details of a problem, as well as examples.

These may or may not be relevant. Lots of folks have tried to sum up what makes a good question, but really what constitutes a good question depends a lot on what is being asked: if your code is behaving unexpectedly, then a good question will tend to include a small code snippet to reproduce the problem, a description of what you're trying to do, and a description of what you expect to happen... You could describe this as context, details, and examples, although that's probably not how the author would think of them. But many users ask questions about things they want to accomplish, but don't know where to begin. Answers point to an API, an algorithm, or a tool. Context is crucial here, but in terms of what the asker is trying to accomplish, not necessarily the code that he's written.

An increased size of the question title, to remind the user that it pops out in reality.

This seems reasonable. Not too big, but slightly larger than the body font.

This would show an example question in (light) grey, so that the user gets the idea.

The entire site should be an example for this. The first thing you see upon visiting the site is a page full of titles.

And actually, this is what makes me and others somewhat negative toward these suggestions: they treat users as though they've been captured, blindfolded, driven to a secret location and dumped in front of a desk where this "ask a question" screen was open, and then told of a question they must obtain the answer to or die. But users have examples - the entire site is filled with examples of questions that have been asked and answered. If you're asking a question poorly, it's either because you don't care, or you've been exposed to more lousy questions than good ones.

But that doesn't mean we can't improve. I think your labeling ideas are decent. Overly verbose, but decent. Here's my suggestion: start a little smaller. Focus on coming up with clear, short, descriptive labels for the major UI elements. Leave the rest for another day.

Increasing the font size of the title to reflect its importance seems like a good idea. The sentences as field labels seem awkward though. Perhaps "Title" could just be changed to "Summary" to better reflect the purpose of the field without making it too verbose? "Provide details like context, intent, and examples" also makes an awkward field label. They're good instructions, but I don't think that's the place for them.

Instead, what about another block in the sidebar below "How to Ask" that provides these bullet points. It would also be good to mention describing what result was expected and what actually occurred. This block could flash (like answers do when you first post them) when the question body textarea loses focus or the mouse is hovered over the "Post" button. These bullet points could be linked to parts of the faq, rather than linking from the field labels. The standard behaviour when clicking on field labels is to focus the entry field, if it does anything at all. It might also make sense to rename the existing "How to Ask" box to "What to ask", and label this new box "How to ask".

The "asking help" link already points to the "How to Ask" page. Maybe it could be renamed to something like "asking good questions"? Or at least something that indicates that it's about writing good questions rather than technical help about the process of posting questions.

Ask the user for the right content: An actual question instead of topics or a title.

I don't think there's any inherent benefit in titles phrased as complete sentences or as questions. This was thoroughly debated recently, but the gist of it is that we want detailed titles, but complete sentences don't get us any closer to that goal. It's kind of an XY problem.

I don't disagree that clarification will have a benefit. But the benefit will be incredibly small because of what Cody, Michael, and Tim say in the comments. Bad posts and ignoring instructions are the rule on the internet, not the exception. You can't change the fundamental nature of people with nice text.

The irony hasn't escaped me that in the comments, you've repeatedly asked "What instructions?" and requested for people to post a screenshot of the existing guidelines that we claim are already displayed when people first try to ask a question.

Those guidelines are actually there, and people do actually have to click a checkmark indicating their agreement to those guidelines. You obviously didn't read them or pay any attention to them when asking your first question, and neither do the users who post the low-quality questions that have frazzled you so.

As observed in the comments by multiple users, including myself, your proposed solution isn't actually going to be effective for precisely the same reason: the types of users you're hoping to target won't read/notice/care in the first place.

Oh, and as for those guidelines you clicked through without paying much attention to yourself: 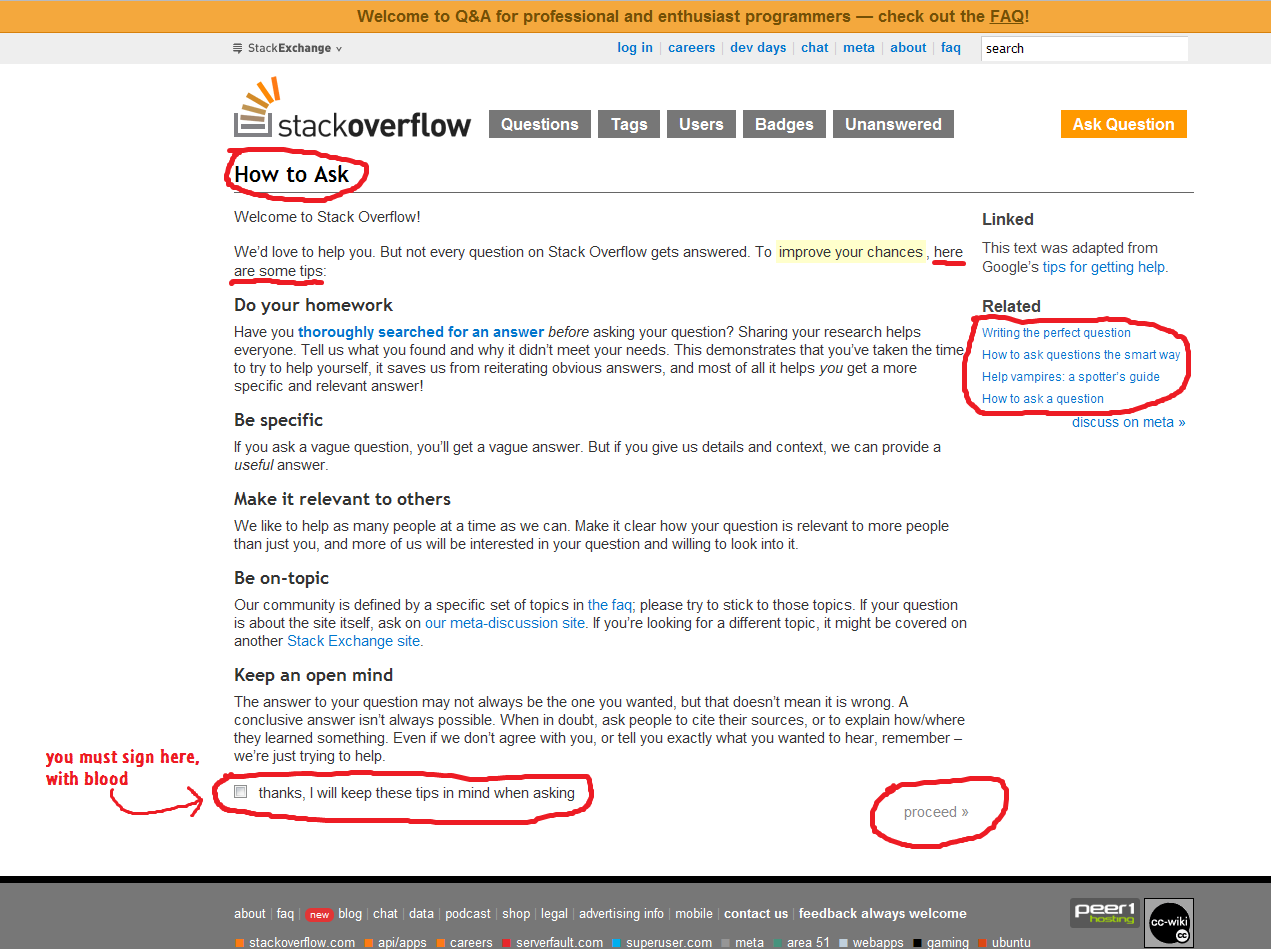 Not the answer you're looking for? Browse other questions tagged discussion feature-request user-interface asking-questions .

963
Show all of my question/answers to me even if they are deleted
910
Why aren't people voting for questions?
591
Exit strategies for "chameleon questions"
246
Can we prevent some of the low-quality questions from entering our system?
225
Link up the excellent search engine that gives "Questions that may already have an answer" with the search box
709
Your answer is in another castle: when is an answer not an answer?
826
Net Neutrality and Stack Overflow / Stack Exchange
2460
Firing mods and forced relicensing: is Stack Exchange still interested in cooperating with the community?
737
New Feature: Table Support