Way to dismiss tag hover popup after you've moused over it

Fairly often, tag hover popups refuse to go away when I move my mouse off the tag or the tag moves due to some other event: (Edit: When it's been moused over) 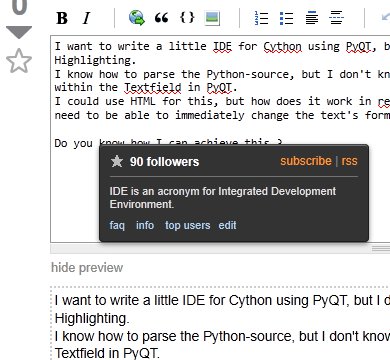 I'd certainly like this to be fixed, but it seems to me it'll probably happen occasionally anyway. I currently use Firefox 6. Edit: By "fixed" I now mean for the popup to disappear if the tag does, like when I inline edit, as in the screenshot.

My real request is an 'x', perhaps in the upper or lower right corner, allowing me to close the popup: 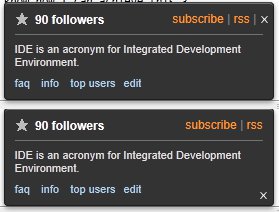 This method is just a suggestion, but I would really like some way to dismiss the popup, as I often want to be able to read or type something underneath it, and as things are now I have to navigate away from the page and return.

Edit: The first answer points out this will happen if you accidentally or intentionally move the mouse over the tag, and that moving over any tag should clear it.

This will still often require that I scroll elsewhere on the page to remove it (for example, when I edit a question with inline-editing, as in the screenshot, when it fails to disappear with the tag).

Also, are there any situations where there is only one tag on a page? In that case, you would still need to navigate away once you've moused-over the hover popup.It appears that most of the time, mousing over the same tag will work. So, as long as there is any tag on the page you won't have to navigate away, but inline editing still makes this a pain as it moves the tags. I also still occasionally am unable to make it disappear by mousing over the any tag, but this is a somewhat separate issue.

Post-Final Edit: Occasionally, the popup still doesn't disappear when I move the mouse away from it. However, so far, moving the mouse back over it and away again has always cleared it.

This was a regression - the tag hover will now be dismissed on mouseout like it did previously. This will be in the next build.

Looking at the code, the only time that this should happen is when you hover over a tag and the mouse moves over the resulting popup. Additionally, hovering over any tag again should remove the popup from the page without you needing to reload. It's hard to say if this is the intended behaviour, though.

If it is, I agree, there should be a way to close the popup. The popup should also be removed automatically when the tag it belongs to is removed from the page, like when you hover over a tag popup on your way to the edit link (which I assume is what happened in your screenshot).

Using Safari 5.1, the pop-up stays open when I hover the mouse other the pop-up. The pop-up didn't work in this way, previously.
It doesn't go away, even if I click with the left mouse button on the window, as it is visible in this screenshot. (The blue area is because the browser selected the area when I clicked two times in row.)

A close button would be helpful, in such cases.

Not the answer you're looking for? Browse other questions tagged bug status-completed tooltips .

8
What is your opinion of the new tag "subscribers" tooltip?
5
Profile dropdown bug
84
Please tone down or remove the auto-expansion of the search box
2
Hovering over a tag no longer shows the tag popup on the edit/ask a question page
417
Decision on rejected edits should be displayed as a notification to the editor
7
Tag popup disappears when trying to mouse over it
363
New three-tiered badge idea: Explainer →Refiner → Illuminator
580
We're switching to CommonMark