Primaries should select the top 8 candidates

I think it would make more sense if primaries were still triggered upon reaching 11 nominations, but then they should pick the top (say) 8 candidates. This would make primaries always meaningful (cutting down on the amount of choices to the most prominent/popular choices) but never awkward (you'd always prune at least a few people, and not just one or two).

As proof, I ran the elections of Stack Overflow, Programmers, Super User and Gaming, with and without the users that came up 9th and 10th at the primaries. The differences are negligible.

The full ordering of the candidates can be obtained by running the elections with 1, 2, ..., 10 seats. The 4th place candidate is the one that wasn't elected with 3 seats but is elected with 4.

To simulate what would happen when the 9th and 10th users in the primaries (marked yellow in the tables) would have been excluded in the elections, I used the "Withdraw candidates" option of OpenSTV, so that any preference for the two users is discarded correctly and the relevant ballots are updated correctly.

In no cases was the ordering of the remaining candidates changed by this, and only 50 votes from Stack Overflow (out of 4,269) were completely removed as the result of ignoring the bottom two candidates. I think it is fair to conclude that running an election with 8 or 10 candidates makes no practical difference. 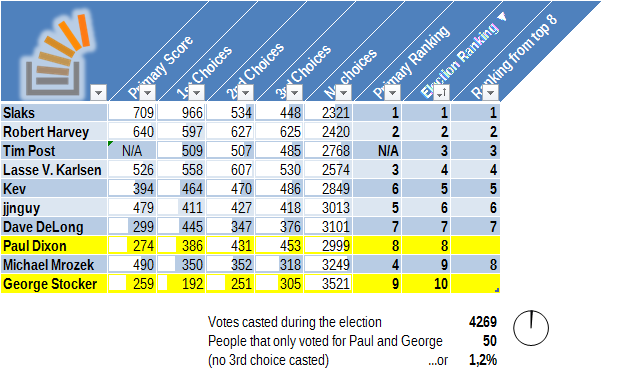 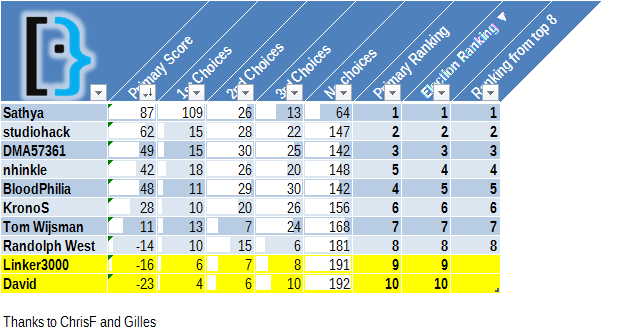 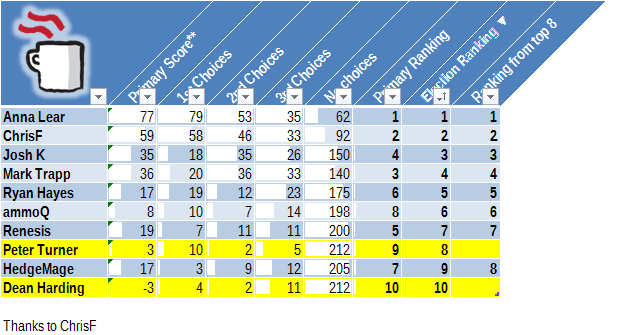 It always sucks to just meet the threshold and require a primary to eliminate even just a single person, but that’s exactly the purpose of the primaries. We want to narrow the possible of choices going into the election even if it is just by one.

Spending three days throwing out one candidate sound both awkward and a waste of time.

Not the answer you're looking for? Browse other questions tagged feature-request election .

14
Total number of voters in the primaries?
6
A gold badge for the top five candidates who don't win?
72
Comments on moderator nomination statements should be more visible in all stages of the election
47
Can we use something other than reputation as the bottleneck for election primaries?
18
SE Election ballots with unexpected values
275
Let's disallow moderator nominations from people who've been suspended in the past year