Can askers intentionally move their questions from one site to another?

Perhaps this question has already been asked, but I've been unable to find anything similar. Can Stack Exchange follow a more generic approach? is alike somehow, but nevertheless mine differs and is less general.

I want to discuss the following case with you. Imagine that a user creates a question on some specific site; time passes by, and nobody gives a good answer. Then he realizes that actually there is more specialized site for his question, a site where he will probably receive more interesting and informed feedback.

Is there any way for him to move his question from one site in the SE network to another? Just move, nothing more complicated than that. No syncing, no providing same question for different sites, no importing, just moving?

Of course, even in this "simple" formulation, it is not that easy. There are lot of issues that should be resolved to make this feature workable. For example, how should it look from the point of view of the UI, should we also provide some voting mechanism to force moving, and so on.

UPD: OK, guys have told me about the way it can be done - we can flag the answer to moderator. Though we most possible will achieve what we wanted, I don't think this way is quite handy.

Extending it to anyone who asks a question would potentially "open up the flood-gates" for a bunch of bad, off-topic questions to be migrated to other sites.

But I can not see a real drama in the described situation. We actually have perfect engine for punishing "evil" or "lazy" or "stupid" askers - downvoting. User abusing etiquette will be punished by the community.

And please, downvote it! THIS IS AN ORDER!

Other answers have explained how you can request for your question to be moved to another site: flag it to have a moderator do it (or not, if the moderator determines that the question is not appropriate on the other site). If you have enough reputation to vote to close and the desired site is listed in the “close as off-topic” pop-up, you can vote to close your own question and wait for 4 community members to agree.

Why can't you do this on your own? After all, nothing would have prevented you from posting the question on the other site in the first place. But once you post a question, it no longer fully belongs to you, it belongs to the community.

If you delete your question from the site where you originally posted it, you've wasted all of these people's attention — that is why there are strict limits to deleting your own question. If you allow the question to exist on two sites at once — which is the practical effect of migration — you're capturing the attention of people on both sites, which gives your question undue exposure. (On a related note, posting the same question on two sites (“cross-posting”) is not permitted.)

This is a big part of why migrations, even when desired by the asker, are subject to community or moderator review. (Another reason is that migration initiated by the asker is a rare case. Even leaving aside the issue of misguided askers, it's ok to get a moderator involved in such a rare case: moderators are the human exception handlers.)

What if we will be able to move a question from one stack to another? Just move, nothing more complicated

Simple. Click on the Flag link, post in a message saying you want to move and done. If the question's on-topic on the requested destination site, Moderators will oblige your request. 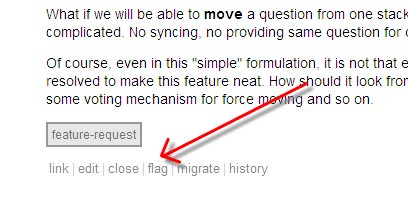 I honestly don't mean for this to sound rude, but it boggles my mind how you can have nearly 500 reputation on Stack Overflow but not have noticed the question migration feature. There are so many questions that get closed and migrated on SO each day that you surely have to have seen this without realizing what you were seeing.

For example, this one from one of the tags you seem to be interested in—originally asked on SO, but since migrated to Code Review, where it is more on topic. (As far as the UI, note the grey-colored banners at the bottom of the question on each site, explaining that it has been migrated.)

Basically, we already have what you suggest. Questions that are off-topic for one particular site, or even that are likely to get better answers on a different site, can be migrated to that site in one of two cases:

This works for both new and old questions (although you should be more careful about migrating old questions; sometimes the site you're thinking of migrating to doesn't want a bunch of old questions).

I do think that it's important, though, that we keep this migration privilege limited to moderators and a super-majority of people with close vote privileges. Extending it to anyone who asks a question would potentially "open up the flood-gates" for a bunch of bad, off-topic questions to be migrated to other sites. Requiring that these migrations are first vetted by either a moderator or by trusted members of the community, we keep the option for migration open while still keeping in mind the best interest of all sites involved.

Not the answer you're looking for? Browse other questions tagged support migration migrated-questions .

471
Is cross-posting a question on multiple Stack Exchange sites permitted if the question is on-topic for each site?
501
How does deleting work? What can cause a post to be deleted, and what does that actually mean? What are the criteria for deletion?
16
Require more than simple majority of close votes to migrate
4
Can Stack Exchange follow a more generic approach?
1
What is the optimal path I can use if question is posted on wrong portal