Unifying the main site/chat/meta/blog links in the header

When chat was first introduced, it was referred to as a "third place". Now, we have what is essentially a fourth place: The site blogs. (Yes, it's on a wordpress engine, and not all sites have them, but many do. But it's a component of a site's presence.) If this trend continues, there will eventually be a fifth place, and a sixth place, and so on.

Perhaps, before this goes any further, it's time to re-examine the way SE addresses iterations of the sites, from an interface standpoint.

I suggest that, instead of the chat link that's at the top of all sites (which sometimes, confusingly enough, becomes the blog link, but that's another discussion) with a drop-down menu. This would be populated by links to chat, meta, the SE blog, as well as the site blog (if there is one) - and, also, any future sites introduced on a network-wide basis.

Integrating the site blogs into the SE system more tightly would also allow for the blog icon to indicate when there's a new post on the site blog and/or for the main SE blog. (Would a tie-in to blogoverflow do the trick?)

While introducing a new drop-down menu complicates the interface a little, it's simpler than pushing stuff to the footer, which - I think - few people look at regularly.

So - am I on the right track, or would this be a horribly well-intentioned idea? Is this already being considered in some form or another?

It's a little bit more complicated that what you suggested, but the new top bar does have a dropdown menu unification thingy: 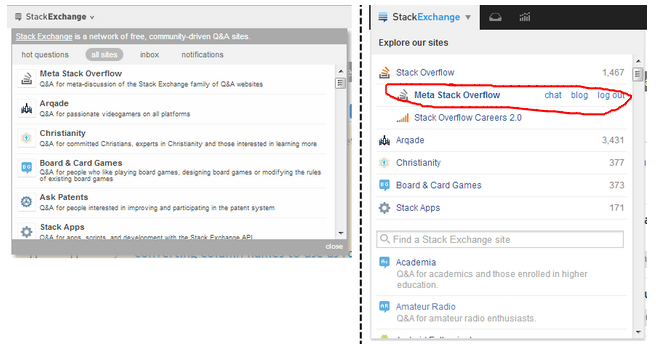 Not the answer you're looking for? Browse other questions tagged discussion feature-request status-completed user-interface top-bar .

39
Eeeek! Where did the chat top navigation link go?

20
Include both the chat and blog links permanently in the header
189
Using the Stack engine for the blog – a long-term idea for maintaining a healthy blogging culture
404
Graduation, site closure, and a clearer outlook on the health of SE sites
13
Link to blogs outside BlogOverflow in StackExchange menu?
381
If you're gonna talk Politics, you must respect those who disagree
193
We will no longer be hosting Blog Overflow
825
Net Neutrality and Stack Overflow / Stack Exchange
2453
Firing mods and forced relicensing: is Stack Exchange still interested in cooperating with the community?
728
New Feature: Table Support