How aggressively should we maintain and improve very popular questions? [closed]

Ask Question
Asked 8 years, 11 months ago
Active 8 months ago
Viewed 5k times
60
Closed. This question is off-topic. It is not currently accepting answers.

I was discussing this question on team chat:

How do I perform an IF...THEN in an SQL SELECT?

This question is a high value asset on Stack Overflow, it already has 150k views, 120+ total votes between questions and answers, and a very high ratio of positive anonymous feedback.

I approached improving this question aggressively, too aggressively for the team's taste: 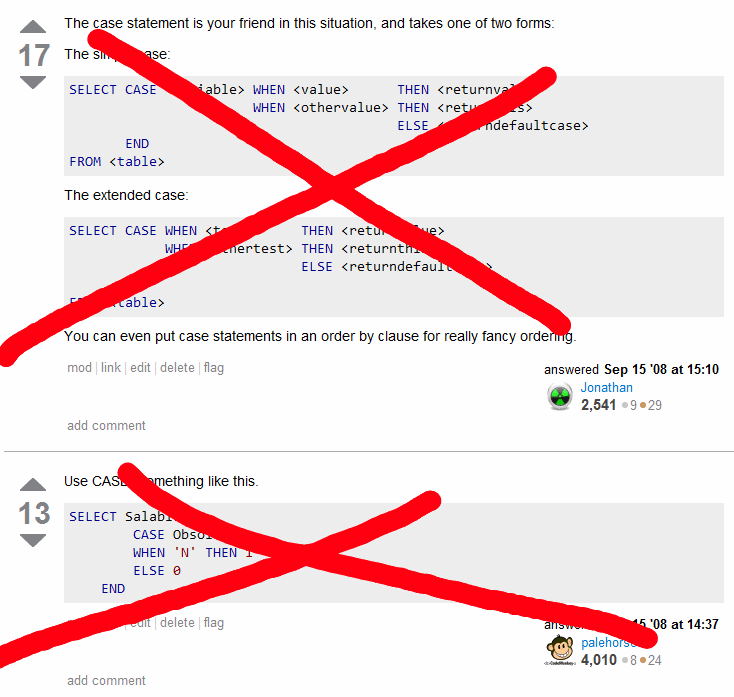 (Since then I have undone my actions, except for a comment conversion and the big edit.)

This raises the question: What should be done to keep this high value question in great shape so it effectively helps lots of people down the line?

When I was a teacher's assistant at the university I learned some important lessons about teaching people effectively.

One of the most important things I learned was that sometimes it took multiple tries of telling a student the exact same thing in slightly different ways before they would grasp the concept. I don't think duplicate information gets in the way or harms a question.

As long as there is no misinformation in the answer, I don't think you should be deleting answers.

I think one of the main reasons I like duplicates in particular is because they help clarify each other. Someone looking for help can examine all of the answers and discover the commonalities in all of the examples. Now, they know the base concept instead of one or two individual's twist on it.

I think there are a general set of guidelines for question maintenance that should apply to any extremely popular question:

So in short, I don't think the way you handled that question was correct. I support some deletion, but only under the quality terms outlined above -- and I strongly object to the "favorite child syndrome" where only the accepted answer gets first class treatment and all the other answers are either deleted or ignored. That's not fair to the community, and it sets a bad example for everyone.

No you didn't. You tweaked the code formatting and added a couple more examples. The spirit and meaning of the answer is alive and well.

This is tricky... I hate duplicate answers. I've been known to down-vote every answer to a question save one, purely because they added nothing to that one. Even if that one answer preceded them by seconds... Because, really, who wants that noise?

As The jjnguy is fond of pointing out, different wording for the same thing can be useful. Some folks just need a little different wording to understand what's being shown them. So the fact that there are 18 answers to that question isn't necessarily a bad thing...

Except that a pile of them are duplicates. Exact duplicates. And in two years, no one down-voted them, no one commented on them, no one improved them... They just sat there, repeating what the accepted answer already said, taking up space. I'm not sure why you deleted the answer that opted to describe the syntax for CASE instead of giving concrete examples; it may not have been all that great of an answer for most folks, but it did give the answer in a different way. But that still leaves at least 5 answers that add nothing.

My personal preference is that authors delete their own answers when they fail to add anything new. Commenting and down-voting is a reasonable way to encourage this...

Failing that, I advocate a conservative approach: leave them alone until they're doing actual harm. What harm can a duplicate answer do? In this case, obscuring the new answers, specifically: one that was inapplicable (but not down-voted) and one that correctly noted the existence of a new method (previously suggested, but inapplicable at the time).

Yes! If you do that, who cares how many other answers there are? Sucks to be the guy not getting any rep for noticing that IIF now exists, but it's great to be the next reader who doesn't have to troll through 18 answers to find it!

Impossible to predict. Shame no one bothered pointing out that they were dups two years ago though...

Well, yes. The asker got his answer two, almost **three* years ago. The 160K readers since are the only reason it's worth keeping around, and the core reason for having this site in the first place!

Down-vote them, perhaps leave a comment noting that this answer already exists and that they should try to add something new if they really must bother. Protect the question if useful. Delete once noise-level injures the ability of future readers to evaluate new and novel answers.

I delete answers if:

So my actual deleted answer count is pretty low; on SO I would expect it mostly on trivial questions that get 10 duplicate answers in the first 30 seconds. It sounds like super popular questions like this also fit the criteria, since new people show up a year later and submit a duplicate answer without reading the existing ones. In any case, if people submit an answer and realize somebody beat them to it they should be deleting it on their own, so they certainly shouldn't get bent out of shape if somebody else does it for them.

I definitely wouldn't have made that edit, and I probably would've rejected it if it were a suggestion; you more than doubled the amount of information in it -- it should've been a separate answer.

I think dupe answers aren't a problem, as jjnguy said, IF it contains some explanation rather than just a chunk of code.

For me there is one thing wrong, shallow answers.

I think people who post just a chunk of code without any explanation shouldn't get upvotes at all. The answers might help someone, but the effort to guide the OP is so shallow I think it it is not worth an upvote.

The +17 answer is a good answer, it is showing the syntax of the CASE statement and it mention that you can use to order the result as well. It has interesting and useful information.

But if you look at the +13 answer it is just a chuck of code, that misses some points mentioned by others. The text entered on it is obsolete. Although the answer is awful, it is correct, I am not sure what deleting it would mean, but I don't think people would like to have a 'correct' answer deleted. Instead of deleting this answer there should be a way to "lock" votes on it, people shouldn't vote on answers like that.

I remember a post on the blog about creating pearls not sand, that's what is missing, pearls. People should incentive complete answers rather than chunks of code without explanation (aka sand).

If the answer is accepted and needs improvement, yes, because it's the first one people will see. However, unless that answer was genuinely wrong or incomplete on its own, I would not add new information from other/newer answers unless the new answers have extremely poor visibility, for example due to a very high answer count and none of the conditions above being applicable.

Will deleting answers with +17 and +13 score turn away high rep users?

If these users are earning their high rep by posting obvious duplicate and/or low quality answers, who cares? Spend some time on Programmers.SE and you'll be as numb to this as I am. Honestly, once you reach 25k and beyond (and there are a ton of Stack Overlow members above that now), you probably won't even notice the disappearance of 100-200, much less care.

Has this asset become a public resource, whatever that means?

Posts become public resources as soon as they're posted. That's what the CC-wiki license and highly-discoverable edit functions on these sites are for. Public does not mean read-only.

What should we do when new answers trickle in and are dupes?

If they truly do not add anything new, delete them, preferably after leaving a comment to the poster asking them to upvote the post they've duplicated if they agree with that answer.

I for one vote for trimming the fat and getting rid of shitty answers. I think that once a question has passed a tipping point (I consider three primary criteria)

So given those three criteria, if we take any two of those, I think that we can start trimming the fat. We need to get rid of weak answers, for sure, and we need to consolidate similar answers.

I think this is going to annoy high-rep users, but it'll probably piss off low-rep users more.

Besides, if you spend enough time trying to make sure yours isn't the one deleted, you're going to get more rep for it. If you didn't care about it in the first place, you're going to find that others will care for it even less. And I think this is the bottom line. You have to care about the answers you give more than for the immediate tiny bit of rep. The ones of us who do and find our answer was deleted because it was crap will ask why it was crap, and then we're likely to improve our answers in the future.

Now, we need a system for doing this, so I propose that the rule is you have to give the OPs time from today till the end of the year to start getting serious about updating their own posts, but after Jan 1, 2012 it's open season according to the criteria above. Not everyone logs on everyday, and not everyone logs onto meta, and not everyone reads the blog. But getting the word out there to the high-reps now will get them to decide if this is a big deal for them.

Not the answer you're looking for? Browse other questions tagged discussion edits flags duplicate-questions popularity .

5
Is flagging good for answers that don't add any value?
294
How do we encourage edits to obsolete/out of date answers?
102
Can we exempt downvoted accepted answers from getting the top spot?
52
Lots of not-always-useful but well-intentioned answers
24
Should authors be encouraged to maintain their answers?
22
We should always be able to include explanation with moderator flags, even if they're not a custom situation
23
How can we utilize the “Greatest hits” list for our sites?
13
Should I downvote an answer (no added value) posted on an already well answered questions?
13
Moderator Deletion of Equivalent Answers?
7
When should one edit someone else's answer vs. Adding your own?
See more linked questions