I suggested a few new tag wikis. Most were accepted, but in a few, the tag wiki body was accepted but the corresponding excerpt was rejected, leaving them with no summary.

I inquired about it on Super User meta. It turned out that they had been rejected accidentally by a user who had just gained review privileges (10k repuation). He said,

I thought they were re-writes of previous edits.

More recently, it has happened again, with a different editor (who had also just passed 10000 reputation).

I don't have access to the suggested edit review UI, but it seems that the interface is confusing to users when reviewing suggestions for tag wiki excerpts. Could it be changed to clear up the confusion?

I propose the following changes to the UI to make it easier to tell when there is a related tag wiki excerpt and body proposal: 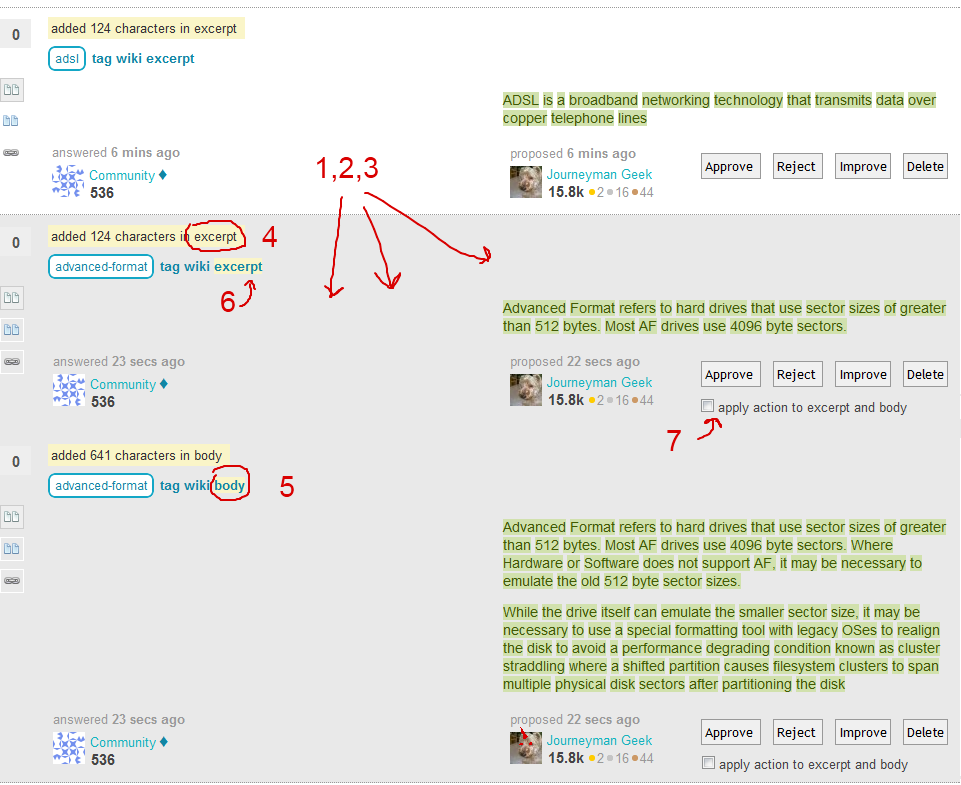 Not the answer you're looking for? Browse other questions tagged feature-request status-review suggested-edits user-interface tag-wiki .

296
How do suggested edits work?
70
Suggested Edits add "Thanks in Advance"
3
Were my tag wiki suggestions rejected (AKA: Do blank tag excerpts result in tag wikis not showing up)?
417
Decision on rejected edits should be displayed as a notification to the editor
357
Reject an already-approved suggested edit when rolling it back
14
Change tag "wikis" and "excerpts" to a different name
57
Automatically reject suggested edits where edit summary is an email address
306
Moderators should be able to manually ban users from suggesting edits
13
Warn tag wiki excerpt creators/editors that markup/links don't work in excerpts
295
How do we encourage edits to obsolete/out of date answers?