Should questions contain general categories in the title?

Should language-specific questions contain the language name in the title?

I want to ask this again, but in a broader context. On Boardgames, some users feel that adding the game name to the start of every question is in fact a best practice, such as user Tom Au.

In general, I have taken the approach of respecting the original author's intention. However, a recent question was edited to follow this practice, and I would like to canvass wider opinion on the practice here.

The original question linked above, despite being marked as a FAQ, does not have a clear best answer, has very few votes, and is from the early days of Stack Overflow.

Do we have a community consensus on this? In general, is it better to add programming language, board games, or other general categories to titles (which would be also present as tags), or not? Should one edit an existing title one way or the other?

Anything that exists as a tag - programming language, board game etc, should not usually be added into the title. There might be cases where this is important, but most of the time it's duplicate information.

Using a tag in the title is OK if it's a natural part of the question. So, for example, compare and contrast the following:

How do I concatenate strings using LINQ?

The latter is a proper question that just happens to use a tag. It's also a far better title for your question. (Thanks to Cody for the examples)

SE automatically adds the most popular tag (if one isn't already present) to the title attribute for SEO.

I've seen it edited out before, but never in. I don't think having it in is always bad, but there's no need to edit someone else's question for that when it's tagged appropriately.

Also, consider what happens when you have a question about multiple games. Do you stuff all of the names in the title? Try to come up with some sort of superset that doesn't give the wrong impression that it includes other games? (E.g., "In solitaire games other than Clock....")

I think it's better to leave it off and not bog down the title. The tags are designed for categorization; the question title is not. 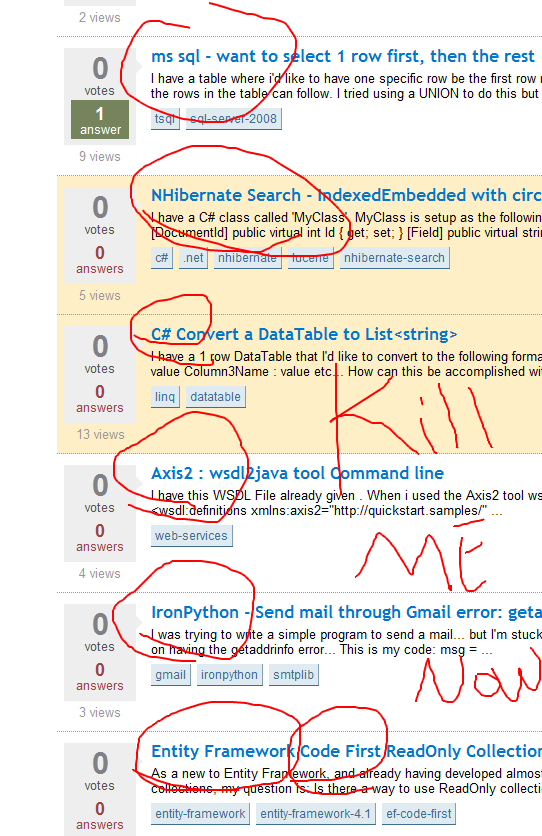 Please also consider that Tags are not shown in the RSS feeds for questions. Until they are (or are the summary text after, it's far more convenient for one tag to be in the question.

Sometimes there are short questions where this basically "doesn't matter" because one can see the tag at about the same time as the title.

On the other hand, it could be "jarring" to read a long question, think "what is this about?" and then finally come to the end to see a tag. Too many such experiences, and I might want to move to another site.

Our grade school teachers taught us that "heading" was important to get people to read your stuff. They probably knew what they were talking about, although admittedly, it may have less validity here than somewhere else. Even so, putting the game name in the heading is a good way to "put one's best foot forward," and separate members and non members of your audience at the beginning, rather than the end of the question.

In the rare instances that multiple games were involved, I'd indicate this fact in the heading and then list them in the first paragraph.

Maybe most people here feel that the idea has merit, but is not mandatory. If that's the sense I get (and I'm beginning to), I'll refrain from making this edit in the future.

Not the answer you're looking for? Browse other questions tagged discussion tags search etiquette title .

317
How do I write a good title?
280
Should questions include “tags” in their titles?