The list widget in Careers is very handy--a simple and elegant design with the up and down controls to re-order elements. Kudos! I also was glad to see the new section to list articles one has written. So... I loaded up my first batch of 16 articles. I had only one decision before starting: what order to enter my articles? Realizing that the list widget puts each new entry at the bottom, and that I wanted my latest article at the top, I started entering in reverse chronological order, i.e. my latest one first putting it and keeping it at the top.

At the risk of impinging on the simplicity and elegance of the list widget I would like to suggest adding move-to-top and move-to-bottom controls, as shown (I have highlighted the controls I added): 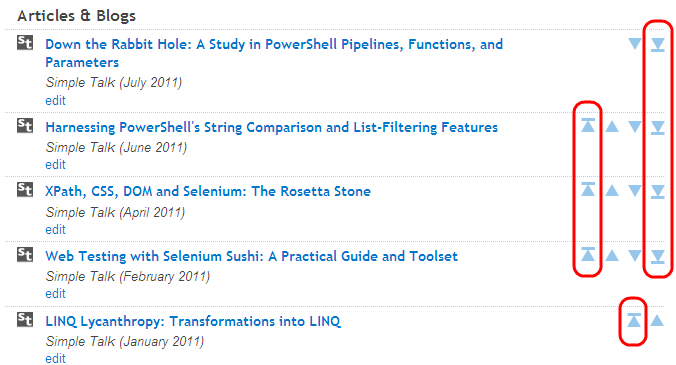 I realize this makes the display a bit less simple and less elegant. As a mitigating approach, then, how about adding a checkbox to show or hide these extra controls, leaving them hidden by default?

Being optimistic that more exposure to this serious plight might gather some momentum for it, let me offer one more idea: Add a numeric input field next to each item where the number specifies the position in the list. One may then move an item to another position with a single edit (the system must then intelligently adjust the numbers in all the other items to suit). This algorithm is well established--Netflix, for example, has used it for a long time for its viewing queue. It is discussed along with several others at User interface for reordering a list items.

We have talked about this internally a number of times. It is the consensus that once you add enough of any particular item to a section in your profile, ordering them can be somewhat cumbersome. Here are some ideas we have come up with and why we have repeatedly thrown them out:

As for your specific problem where you just need the list to be ordered in reverse chronological order, perhaps something simple could be devised, like assuming last read or written items should show up at the top of the list and leave the other sections alone.

Not the answer you're looking for? Browse other questions tagged feature-request status-deferred careers list .