Could we please have a clickable arrow to expand hidden content?

For many questions/answers where I wish to provide background, explanation, mildly extraneous detail, etc., I would really like to have that little arrow thingee that one sees in the FAQ:

To partially mitigate all of the TL;DR comments (note there are quite a few -- even on meta), I feel that this could significantly improve the readability of the higher quality questions.

I'd love to see the existing spoiler be enhanced for that. The syntax is:

Lacking a proper hover on some devices, the new mobile sites render this as: 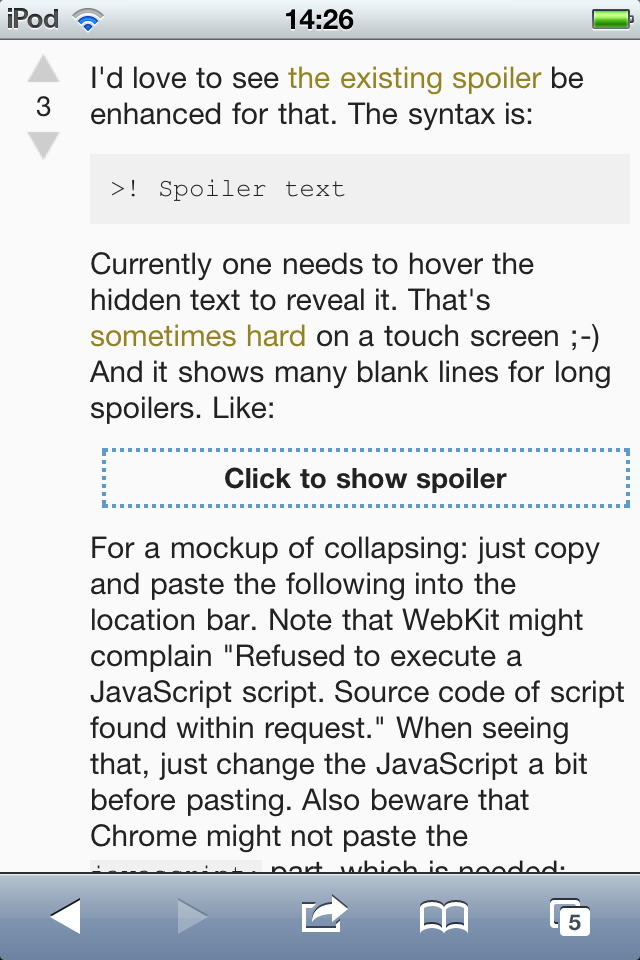 On the regular websites, one still needs to hover the hidden text to reveal it. This includes tablets like the iPad, where not everyone knows that hovering is initiated by tapping first. And it shows many blank lines for long spoilers. Like:

I'd like something similar to the mobile sites on the regular sites too, but:

On the other hand: beware that the handling of Markdown within the spoilers is very limited. One cannot easily change an existing block into a spoiler.

(Click the "mobile" link at the bottom of this page to see the mobile rendering in a regular browser too. To switch back, click "full site", though that does not look like a link.)

I am looking at posting a question that will need to include, or link to, the contents of a sizable-ish log file. There's certainly sites like pastebin that I could use, but linking to the data with it placed on any external site means I'd run the risk of the question still existing at some time in the future but the linked data no longer being accessible.

This could be a problem if said data was required by some future person looking at the question to determine if the issue they're having is the same as the one I did, and hence whether the answers might also help them.

So I'd like to post the log data on the particular stackexchange site along with the question - but would like someone to be able to have an overview of the question - without all of the log data shoved in their face - and decide whether this is a question that they want to try to answer (or if the answers to it might or definitely would not be helpful to them), before then being able to cause the text area storing the (initially hidden) log data to expand and display it if they decide they want to see it.

The >! spoiler thing mentioned in Arjan's answer is something I wasn't aware of, and is interesting, but obviously not usable for this issue, for the reason he/she outlined - it's not expandable/shrinkable, so there would be a great big blank area in the middle of the answer.

One could simply reference the log date in the question itself and place the data at the bottom of the question (like a footnote), but people would still need to scroll through it to get to the answer section if they wanted to i.e. see if someone had already given an answer that they'd thought of.

Of course there might be similar cases where the log data (or whatever other type of data it may be) is crucial to having any real understanding of the question at all, and others where poster thinks the log data may or may not be relevant at all, and everywhere in between, and in some of these cases it might be preferable to simply have the data permanently displayed inline, but I think it's fair to state that there are at least some legitimate use cases for an initially hidden, expandable text region.

3
expandable text in answers for version b and for explanation
199
Please add the ability to fold blocks of code in questions and answers
165
Add markdown support for hidden-until-you-click text (aka spoilers)
68
Should the markdown renderer treat a single line break as <br>?
91
What's the exact syntax for spoiler markup
37
Differentiate spoilers from empty block quotes
17
Mouse cursor doesn't change to pointer when hovering "full site" on mobile
17
Does the spoiler markdown work on images?
17
Can't see spoilers on touchscreen
19
Add required number of posts to tag badge descriptions
See more linked questions