I was reviewing suggested edits when I ran across this one (to this question): 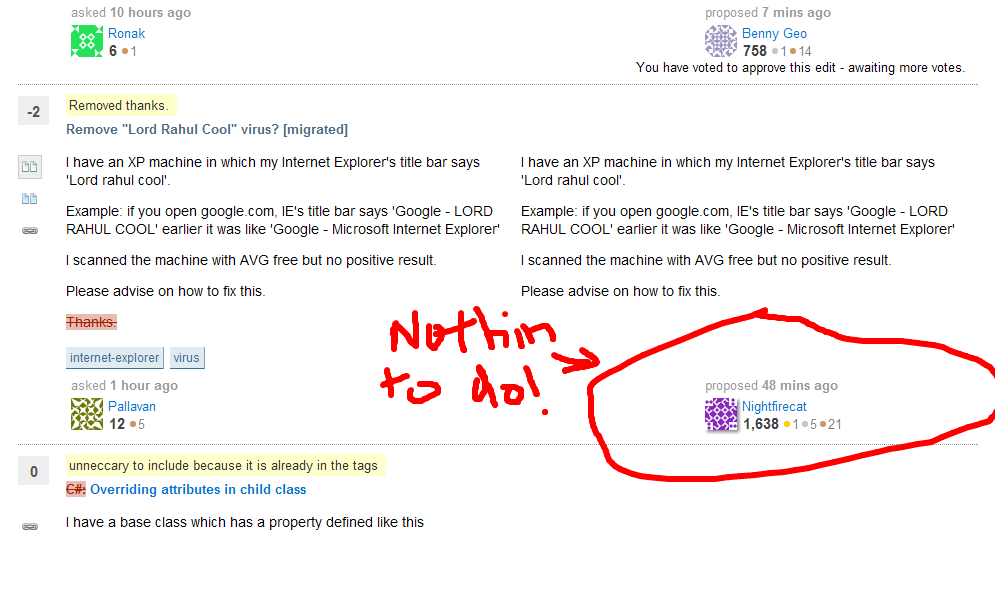 I expected to see some Approve or Reject buttons, but instead, it sits there just daring me to try anything. It's survived a few refreshes. It might as well be wearing a troll face.

EDIT: the question was migrated, likely after the suggested edit was made.

bug status-completed suggested-edits
Share
Improve this question
edited May 23 '17 at 12:36

This was happening on locked posts.

I changed it so when a post is locked all suggested edits are rejected by the community user with the note:

Post was locked - suggested edit can not be processed

The behavior of suggested edits on migrated questions was changed recently. Looks like a bug crept in then.

Not the answer you're looking for? Browse other questions tagged bug status-completed suggested-edits .

298
How do suggested edits work?
417
Decision on rejected edits should be displayed as a notification to the editor
22
How do you approve/reject an orphaned suggested edit with no buttons?
51
Allow adding a custom reject reason when marking an edit as "Reject and Edit"
145
Improvements to a suggested edit cannot be submitted when the suggestion is approved during editing
119
Rate limit suggested edits
53
Change edit approval threshold to (# approve − # reject ≥ N)
580
We're switching to CommonMark