First a bit of rant history:

So, my support request is: please tell us how we're supposed to respond to flags. Preferably before making UI changes. And make the UI internally consistent.

It's probably a lost cause, but here's what I would have liked to see instead: 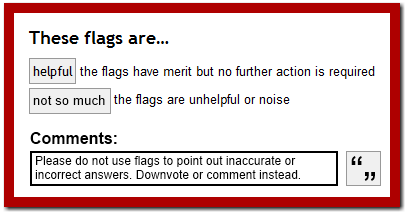 That is to say:

When a flag makes no sense at all (for example, some users flag their question to say "this question is great!" - true story), forcing an explanation is just stopping the proceedings with idiocy. This alternative would have been a convenient way to give feedback without forcing moderators into a specific and usually sub-optimal workflow.

I fear that as it is right now, most moderators will just accept every flag in order to avoid the hassle of going through the decline motions, thus weakening the entire flag weight system (which, as I seem to recall, was originally supposed to be for the benefit of the moderators). Not to mention that the ones who do decide to be helpful will probably be subjected to confrontational meta posts.

To play Devil's Advocate here...I don't really see a problem with this. I've often been uncomfortable at declining a flag without being able to provide a reason why.

For example, not being able to communicate to a user that flagging a post just because it's wrong is a bad flag.

I'm all for a bit more transparency when it comes to moderator actions that negatively affect a user in some way, it's educational and will hopefully alter their behaviour positively without us having to push the "Contact User" button.

It's also good because then the user doesn't feel he/she has to raise a question on Meta and draw unwanted attention to their flagging activities (even if they are mostly well placed flags).

Ultimately we need to try out stuff like this if SE is to continue being innovative in creating Q&A sites that produce a good signal to noise ratio. This might or might not work, but until we've run with it for a bit we'll not really know.

Is the mandatory feedback supposed to introduce friction so that moderators don't decline flags?

I handled 2,700 flags on Stack Overflow last quarter (and I'm still barely #5 by moderator flag handling stats!). Of that, I declined between 1 and 2 percent.

The reality is that decline should be rare -- and they should be flags you feel strongly about declining. In that case, the UI now reflects this: the common 99% action is easy and fast, and the 1% action requires a bit more work.

No -- the normal "helpful" flag case requires no feedback. As Kev said in his comment, "I can't really see a scenario where I'd want to explain helpful behaviour because surely that should be the norm. Much like I wouldn't expect to be stopped by the security guard at my local Tesco to be thanked for not jumping the checkout with an armful of Special Brew and 200 fags."

What are you going to tell them? "Great job!" "Keep up the good work!"

And if you really want to provide feedback, leave a comment on the post. One reason I don't care for secret moderator messaging functions, except when they are unavoidable, is that nobody learns from a private message. It's another dumb information silo trapping information that could be useful to teach the entire community.

(Negative feedback has to be private, because otherwise you are slapping users in public -- and I hope nobody's in favor of that..)

Should we keep using “declined” as before

If you feel strongly a flag should be declined, decline it.

However, it has been my experience in clearing thousands and thousands of flags on Stack Overflow that the vast majority of flags are people genuinely trying to be helpful.

Not the answer you're looking for? Browse other questions tagged support flags moderator-tools .

193
Allow moderators to reply to a flag
94
Allow moderators to reverse and/or nullify flag decisions
7
Remove flag weight and flag validity already
39
When should the “Not an Answer” flag be used?
29
How to answer a question in a declined flag?
21
What is the significance of the new text on the buttons of the Flag Dismissal dialog?
29
Length limit for the “other” field in the Decline Flag dialog
6
Should I disagree with a VLQ flag but also vote to close?

142
Dismiss flags on the same posts with different validities
94
Allow moderators to reverse and/or nullify flag decisions
193
Allow moderators to reply to a flag
41
Community-declined close vote flags should point to the review that declined them
70
Explicitly mention who decided the fate of a flag
296
Add optional box for spam flags letting you say why you think it's spam
412
Can a machine be taught to flag spam automatically?
179
Please give us an easy way to flag inappropriate ads