Make it easier to find the Question Feed icon / link

Question feeds are HUGELY useful, making it possible to organize and track questions of interest. However, the RSS icon and feed link are pretty buried in the UI. 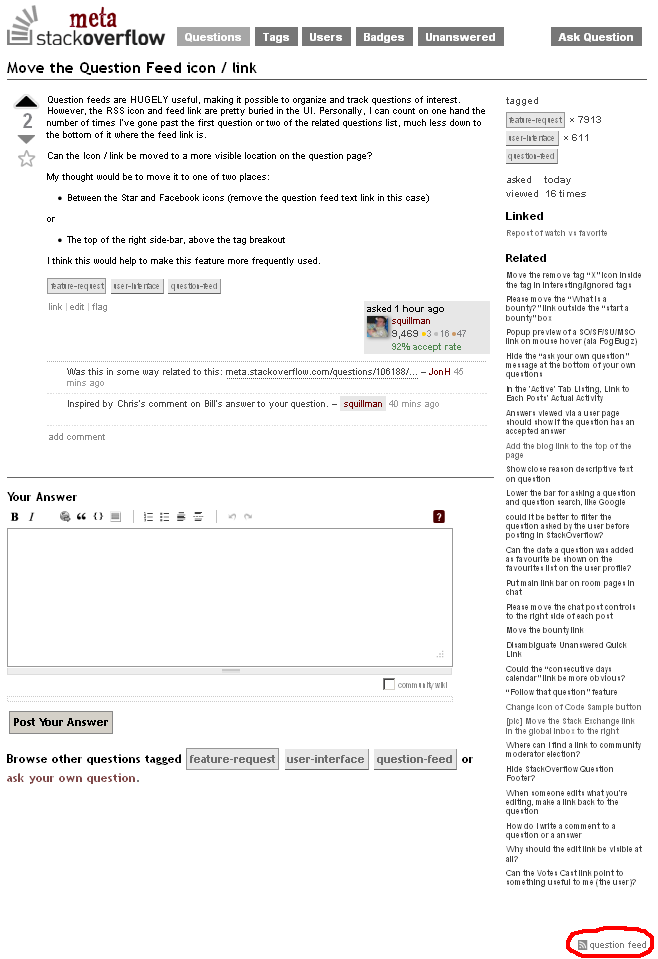 Personally, I can count on one hand the number of times I've gone past the first question or two of the related questions list, much less down to the bottom of it where the feed link is.

Can the Icon / link be moved to a more visible location on the question page?

My thought would be to move it to one of two places:

I think this would help to make this feature more frequently used.

Jeff, in response to your answer. I admittedly have not taken much stock in the question feeds and have not even looked at them much until today. I've been looking for a better way to keep track of questions, mainly for finding the duplicates more easily when I know something has already been asked. I found that today with the RSS feeds. Pop those into your favorite reader and you instantly have an method for organizing the questions you want to keep track of without requiring further UI changes.

Of course, the argument could be made (and has even been made today) that if there is such a deficiency then a UI feature could be warranted but the same can also be said for searching. Google is the SE search engine (yeah, even after the relatively recent search improvements), let Google Reader and browser bookmarks be the Question Filing System.

I'd at least request that you keep this in mind when thinking of the RSS feeds and, even if they don't get much more love from the dev team, at least don't discontinue support for them.

To be brutally honest, we don't think RSS has a very interesting or useful future.

It's available in two places:

That's where it will remain for the forseeable future.

Jeff may feel that RSS doesn't have "a very interesting or useful future", but he is correct in saying that RSS feeds on Stack Overflow are (usually) detected by web browsers automatically. The only reason I didn't notice this before is that Firefox 4 has removed the Subscribe button from the address bar. If you're using Firefox 4 (or a more recent version), just customize your toolbar to include the Subscribe button.

You can use this for all sorts of things on Stack Overflow:

Unfortunately, not every feed is automatically detected properly. In particular, you need to manually scroll down to the bottom of the Stack Overflow home page to subscribe to the following feeds (or just use the links below).

Not the answer you're looking for? Browse other questions tagged feature-request status-declined questions user-interface feed .

249
Mark answer as favorite/star
52
Follow a question
2
Is the question feed of use anymore?
-4
Aggregate User Feed Feature
-6
Repost of watch vs favorite
1
Daily update of search results
0
Why is not there a feature to follow questions?

842
Allow an edit to notify downvoters: “I think I've fixed the issue now - please check”
962
Show all of my question/answers to me even if they are deleted
189
RSS feed of your favorite tags
705
How do I get attention for one of my own questions without a good answer?
584
Exit strategies for “chameleon questions”
256
Reset votes on migrated questions
440
Reward finding duplicate questions - +10, +2, -5