When should the "Not an Answer" flag be used? [duplicate]

Ask Question
Asked 10 years, 10 months ago
Modified 7 years, 3 months ago
Viewed 974 times
39
This question already has answers here:
How do I properly use the "Not an Answer" flag? (2 answers)
Closed 9 years ago.

A few hours ago, I flagged an answer as not an answer. Additionally, I left a comment, basically saying that this answer has nothing to do with the question.

My flag got declined with the following reason:

flags should not be used to indicate technical inaccuracies, or an altogether wrong answer.

However, when flagging as not an answer, the following description is displayed (emphasis mine):

This was posted as an answer, but it does not answer the question. It should possibly be an edit, a comment, another question, or deleted altogether.

<rant> Basically, I am a bit wary about this declined flag right now, because it matches the description on what should be flagged as an answer and with my current flag weight, this declined flag destroyed about two days worth of flagging. That just took all the fun out of it for me, especially, because I am a responsible flagger, and open the questions to really read them and the answer if I am unsure - even if the answer already has several flags. </rant>

So, what am I asking... Well:
Was it correct to decline my flag? If so, please fix the description of that flag option. If it was not correct, how can we prevent such "false flag declines" in the future? Especially in the context of high flag weights where one declined flag really hurts.

How to install an Android application on a real device without publishing and Eclipse? I didn't even flag as not an answer, but as "Other". My comment was: "Although this is the accepted answer it doesn't help. See comments for more info, basically: Contains not much more than a dead link."
It is common sense to flag answers that contain only links, even more so, if the link is dead. As this was an old accepted answer, downvoting didn't help, because I still couldn't delete it. And my flag didn't even ask for deletion, but for "Mod attention", whatever that might be.

You just lost an active flagger, because every dismissed flag costs the equivalent of 50 to 100 "helpful" flags at my current flag weight. All because of some arbitrary decision from some anonymous mod? That just sucks and shows how little the honest flagging effort is honored.

A bad or a wrong answer is still technically an answer. Moderators aren't here to judge the correctness of answers. That's what the voting system is for, so the right way to handle those is to downvote, edit, or leave a comment.

The "not an answer" flag is for posts that are either completely unrelated to the question, a "me too" kind of post, a follow-up question asked in an answer, etc.

In your specific case... hrm. I don't know if I'd remove the answer, but I'd probably dismiss the flag as "helpful". That said, moderator mistakes happen. I don't know who dismissed your flag in this case, so it's hard to say what the motivation may have been.

Here's the answer, for clarification (note, it's deleted, I just removed the annoying CSS attributes) 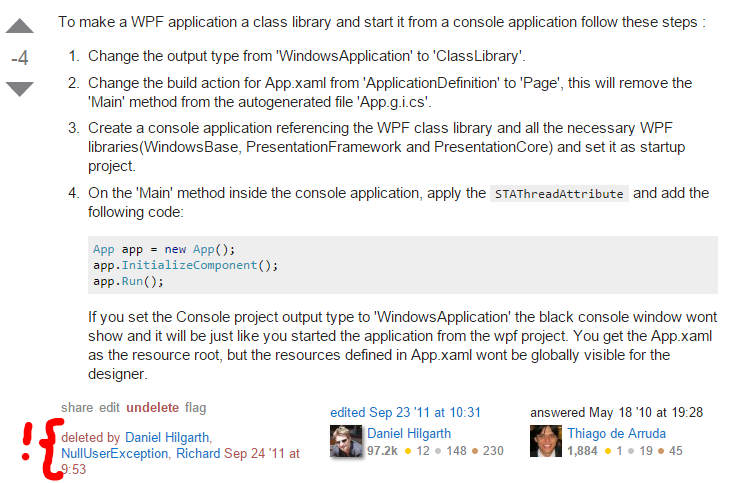 This was posted as an answer, but it does not answer the question.

If this was where it stopped, you would be right. And I don't think StackOverflow could not possibly enforce this without paying its moderators so that there were enough technically savvy employees to judge all the different types of answers on their technical merits.

Fortunately, the close reason continues, stating that the flag should be used on answers that

...should possibly be an edit

meaning that the OP answered instead of editing their question

for one-liners, link answers, "this other StackOver question is similar" repwhoring, or was an answer posted before 2009 (most likely)

which means the OP or another user tried to follow up with another question, aka "forum behavior"

Again, possibly you may have a point here as well. But we do not delete posts for technical reasons. Imagine the uprising if I were to go through the [.net] tag and start deleting answers that were not correct or flawed in some fashion. It would be slightly worse than what I normally cause through my actions as a mod. But, seriously, that would be an abuse of moderation powers to delete posts that are incorrect. It is up to the poster to respond and edit, and up to the community to downvote.

So I definitely think that it was legit to dismiss your flag as invalid. Of course, from our perspective, we have no idea about how responsibly you are when handling the individual flags in the queue. So you have to assume that the mod (not me!) was only making a judgement call about this instance, not you as a user.

Its important to read the whole thing, not just the first sentence.

Not the answer you're looking for? Browse other questions tagged discussion support flags declined-flags not-an-answer .

107
How do I properly use the "Not an Answer" flag?
18
Flag on nonsense rejected, and I don't know why
-10
Was my flag declined unfairly?
-4
Why answering own question with techical mistake is an answer?
10
Is it appropriate to flag an answer as "Not an answer" if it doesn't address the question?
4
Declined Flag question about "Not an answer"
6
What does the "Not an answer" flag really mean?
-6
Should I flag an answer if it's incorrect?
41
Proposed flag decline reasons?
32
Should the not-an-answer flag description be clarified?
See more linked questions

29
"flags should not be used to indicate technical inaccuracies, or an altogether wrong answer" justified?
32
Should the not-an-answer flag description be clarified?
730
Your answer is in another castle: when is an answer not an answer?
300
Add optional box for spam flags letting you say why you think it's spam
422
Can a machine be taught to flag spam automatically?
30
How should the "very low quality" flag be used?
2510
Firing mods and forced relicensing: is Stack Exchange still interested in cooperating with the community?