It appears the particular problem I described below affects Linux versions of Chrome only (and maybe only a specific Linux version).

However, the general strategy of setting the same rbga value for color and background-color to make the text invisible doesn't seem to work on any browser. If you zoom in closely even on a "working" browser you can very faintly (much more faintly than in the screenshot I posted) see the "invisible" text on the linked meta post from the original question.

It's much easier to see the effect when you choose a different color: see this jsfiddle. Though it uses the "same" color for the background and foreground, the text is visible (on every browser I tested).

The default styling for beta SE sites has blockquote styled as

and the "spoiler tag" style for .spoiler, .spoiler a is

(There's a "fallback" style with a color of #eee in both cases, but things are ordered so that browsers that understand rgba() will use these.)

On Firefox this seems to work perfectly, the content of spoiler tags is completely hidden before you hover over them.

On Chrome (14.0.835.202), however, the text is visible. Fainter than normal, but visible. See this post on the RPG beta meta for an example, and the following screenshot of Chrome's rendering (the top two blockquotes are spoilers, the bottom one isn't): 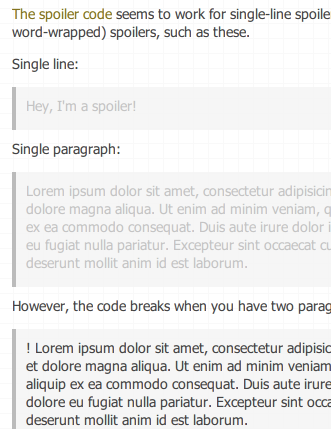 Clearly Chrome is treating the "translucent on top of translucent" styling differently than Firefox is (though exactly how each is treating it is somewhat of a mystery to me). I'm not sure if this change is due to an update in Chrome, or a change in the default styles (the sites with custom CSS seem to mostly just have #eee for these colors).

Anyway, as long as RBGA values are being used, is there any reason not to simply set a value of zero for the alpha channel (or opacity of zero) in .spoiler .spoiler a, since the goal is to make the text not appear? In my limited testing this works for both Firefox and Chrome.

I haven't yet reproduced what's shown in your screenshots... However,

I found that if I tilt the screen of my laptop far enough, I can just make out that there are lines of text there... It's not readable, but it is apparent. I see the same in Firefox 8 and 9.0.1, and Internet Explorer 9.

I'm wondering now if there might be an issue with some display drivers...

Since this is really a duplicate of Is the spoiler broken, for adjacent paragraphs? which has been resolved as status-bydesign, this one should be too.

Not the answer you're looking for? Browse other questions tagged bug status-bydesign design stack-exchange spoilers .

1107
Are there any clones/alternatives for running a Stack Exchange style Q&A site?
21
Can your accepted answer be denoted by proper class name rather then the inline style?
11
<pre> within spoilers is not hidden properly
29
New beta style is much harder on my eyes; looking for CSS overrides to fix
5
Change foreground text color on SE's new Blog search results pagination links
3
Bullet points prefer to remain hidden
108
Request for a possibility to adjust the spacing between lines