Dennis Ritchie goes into the night without a quote on Stack Overflow? [closed]

Alas, Dennis Ritchie is no longer with us.

But I don't see a Dennis Ritchie quote on Stack Overflow. Why is this so?

I think he deserves it. Out of 100 programmers (Stack Overflow's audience last time I checked), I expect all of them to know.

Not a rant, just an opinion.

In any case, some admitted it was a mistake, way cool; others played it around, not cool. Life goes on...

There has been no internal answer, what I offer here is my opinion; it is also the opinion of some of the other members of the team.

Tributes to the dead are tricky business.

Where do you stop and where do you start. Does Bill Gates get a tribute? Knuth? Larry Wall? Matz? John McCarthy? Chomsky? Norvig? Linus? Alan Cox? Bill Joy? Marvin Minsky? Woz?

What about our own community heroes? Does passing a certain rep threshold ensure you get a tribute?

And what about the already dead. Why not respect them?

We used a feature that was never designed for "dead people tribute" to give out a tribute and now are suffering the consequence. System messages were meant for emergencies, stuff like ... the website is going down in 5 minutes, be warned. That is why they can not be dismissed; that is why they are so prominent.

When the Jobs tribute happened Jeff was away; the decision to put it up was Joel's. Jeff was not particularly happy that it went up, probably foreseeing the slippery slope this takes.

For the record, when this happened I suggested going with a house ad. My rationale was, if this really is that important to you: lose some money. That shows respect. It was countered with a "it looks too cheesy". But even an ad has the same slippery slope. And too, like system messages, it is not designed as a respect dead people feature.

When the Jobs banner went out, I had to spend a whole morning on damage control, ensuring huge blood baths between our members do not ensue and ended up locking a question. Unlike Turing, Jobs was not everybody's hero. Now, people want to have their programming hero to compensate.

And we look bad.

For the record I did support the Jobs message; in retrospect, I think that was a mistake.

I think we should not be in the business of dead people tributes as it gets in the way of providing awesome answers to awesome questions, and brings in politics to a place that strives to stay politics-free.

Stack Overflow is for professional and enthusiast programmers, people who write code because they love it.

Jobs was not directly relevant to programming or programmers, no matter how many of them use iPhones or Macs.

Ritchie created tools, which every programmer uses every day. Even those who use Macs and iPhones (they are after all based on UNIX and using Objective-C, which is build on top of C).

Ritchie was not famous enough? Well, what better way to get people to read about his achievements, than by honoring him.

In other words, my opinion is that SO team has no excuse for honoring CEO of hardware vendor, and not honoring one of most important creators of modern programming and modern operating systems.

Rather than putting up a banner every time someone notable in our industry passes, I propose doing the following:

This also has the benefit of showing to people who would appreciate seeing it. For instance, C, *nix, etc would be appropriate here.

While yes, the banner for Steve Jobs did set a sort of precedence, I don't think it will be tenable going forward.

NB This is not an 'official' response, it's just my opinion and suggestion. A half baked one, at that.

Yes, I think we need to do something to honor Dennis Ritchie, now. I just don't want to do it using the system message bar again.

I think it was nice to honor Steve Jobs on SO, but once you do it you have to do it for everyone else. There is no doubt that Steve Jobs was influential but arguably there are more influential people than Steve Jobs in the industry.

So to avoid these types of posts in the future, I recommend that we not quote anyone in any banners on the site since that isn't the aim of the site anyways. Otherwise, you'll end up like Google and changing the banner almost daily to satisfy all the special groups and countries. 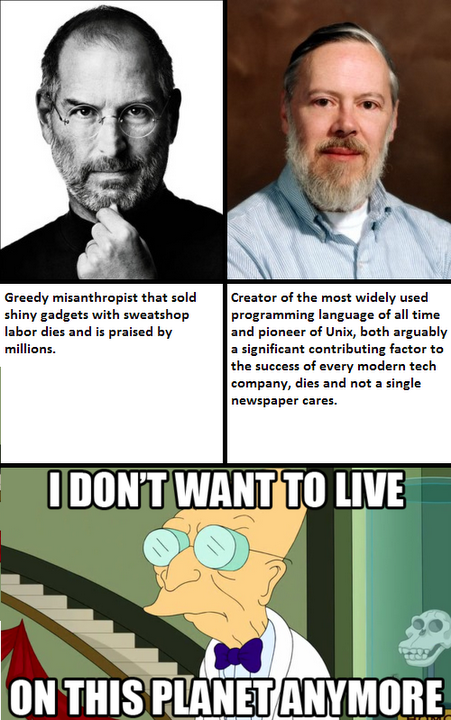 I knew Dennis Ritchie casually, and he will be missed.

But please, I would rather not see every occasion of someone's death turned into endless rounds of being voted "worthy" to be marquee'd in some sort of ritualistic death roll.

When Steve Jobs died, the gesture was thoughtful and touching because it was spontaneous, heart-felt, and seemed appropriate for the moment. But it's sad when grand gestures elicit these "me, too!" reactions. It makes you reflect on ever doing them at all.

If you want us to become the arbiters of "This person is at least as great as that person," the whole thing becomes sort of crass. Rallying and voting only makes the loss more poignant.

Share your stories and reminisce how he affected your life — That's how you honor someone. Rallying around "WHERE'S HIS QUOTE!?" is not paying homage to anyone.

Note the current tagline for the C++ room:

Putting up system messages is a tricky business. They can't be dismissed and really should only be used for emergency / super-duper-extremely important notices.

I think a nice place to put a tribute would be in the relevant tag wikis such as c and unix. This puts it fully in the hands of the community as it is the community that edits and approves tag wiki content.

Unix is simple and coherent, but it takes a genius – or at any rate a programmer – to understand and appreciate the simplicity.

I'm not convinced starting a habit of honouring passed industry notables is a good idea at all.

But if the consensus is that the site should honour them - how about a smaller mention in a less prominent space (but still on each page)?

To me, each dead person meaningful to other people deserves to be honoured respectfully.

But I also think, that SO is not the right place for honouring, no matter if the person to be honoured is Steve Jobs, Dennis Ritchie or John Doe.

Even though it makes me sad to hear Jobs and Ritchie are gone (which both influenced programming without doubt), I don't see SO as a news agency in the end.

When I want the news of the world, I visit AP or Reuters, or read a newspaper.

If I've a specific programming problem (or want to help at that), I'll visit SO.

If the SE team decides to honour a specific person on one or more specific SE sites, it's clearly their right to do so, but it will of course raise endless "If you honour A, why don't you honour B?" discussions.

To avoid this, I only can think of either not honouring anyone on any SE site at all, or maybe an Area51 proposal for something like obituary.se, where every user can honour the person they want to (though I'm not sure how many heated discussions posts in such site could produce).

What do you call it when a brief, completely out-of-the-ordinary tribute launches a hotly debated discussion of the grievances served by lack of tribute to other deserving persons and new policy proposals (and even feature proposals) to prevent such "problems" in the future?

Bikeshedding at its finest.

Not the answer you're looking for? Browse other questions tagged discussion system-message .

366
Jon Skeet Facts
149
Please do not use Stack Overflow to promote social causes
19
November 2011 Moderator Election - Town Hall Chat Digest #2
40
A Plea For Actual Domain Identities
46
Please don't exploit the memory of the deceased to promote the network
8
Provide a non-system-message channel for moderators to contact all users
22
Allow mailto in the user card
7
In what way did Dennis Ritchie influence you?
6
What can the Stack Overflow community do to pay tribute to Dennis Ritchie?
-8
Please do something special for Aaron Swartz account
See more linked questions

6
What can the Stack Overflow community do to pay tribute to Dennis Ritchie?
537
The MIT License – Clarity on Using Code on Stack Overflow and Stack Exchange
265
Let's hold language in comments to the same standard as posts
363
Let's take a look at the interaction between staff and the "power users" of the network
2507
Firing mods and forced relicensing: is Stack Exchange still interested in cooperating with the community?
79
How should I deal with the new CoC as non-native English speaker?
243
How can we put pressure on Stack Exchange Inc. without damaging the community?
2258
Stack Overflow is doing me ongoing harm; it's time to fix it!
583
We're switching to CommonMark