Could normal users have an easier way to flag for migration?

TL;DR: Give the belongs on another site in the SE network option to normal users too, generating a moderator flag.

Often questions are posted on the wrong site on the Stack Exchange network (for volume reasons, most often at Stack Overflow). Then they need to be closed as off-topic, and optionally migrated to a better site.

The "close as off-topic" (or "flag as off-topic", if you don't yet have closing rights) dialog has up to five migration targets (the most likely migrations) build in, and if at least four of the five closers agree on one of them, the question will get migrated there.

Moderators see in this dialog actually one more option:

together with a text field which allows selecting a site by its name.

Normal users don't have this option: They can only flag/vote to close as "off-topic", and use the "flag for moderator attention" general reason, and input a reason in the free-form text field: 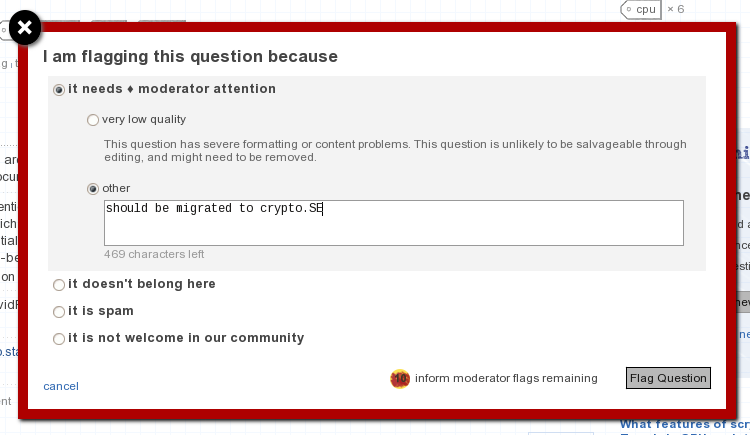 Most of my flags in the last months on Stack Overflow are actually of this type (mostly for Crypto.SE and TeX.SE).

My feature proposal (actually, three of them)

Related: Adapt close dialog UI for upcoming avalanche of StackExchange 2.0 graduates - Waffles' answer says such a search box was intentionally omitted so people don't have to do the hard work. So now moderators have to do this hard work instead (for cases other than the five ones listed). I'm not sure this is really better.

Rather than a complicated set of rules, I would recommend a better tracking of users' privileges across sites. My suggestion would be:

Not the answer you're looking for? Browse other questions tagged feature-request flags migration vote-to-close close-reasons .

1
Choice of sites while flagging posts as beloning to other SE-site
1
Off-topic with same search box
4
Questions closed without explanation
19
Adapt close dialog UI for upcoming avalanche of StackExchange 2.0 graduates
7
Allow user to flag a question as belonging on a specific site specified by user

206
What is migration and how does it work?
396
Add a way for moderators to cast a normal, non binding close/open vote
1240
Don't throw away all votes when a user is deleted
100
Add "Flag as Other" checkbox to "Vote to Close as Off-Topic" dialog
258
Closing changes: [on hold], unclear, too broad, opinion-based, off-topic reasons, bye-bye to Too Localized
83
Better "Flag for migration" interface
115
Add a "don't migrate crap" migration 'path' to all sites
181
A proposed philosophy of question migration
418
Can a machine be taught to flag spam automatically?