We see a few misguided users here on Meta [asking programming questions], every single one I checked does have a Stack Overflow account...so I wonder what sends them here?

So I clicked Ask Question on Stack Overflow and got the usual site. One thing which jumped to my attention was the "How to Ask" help field...with a link to Meta. 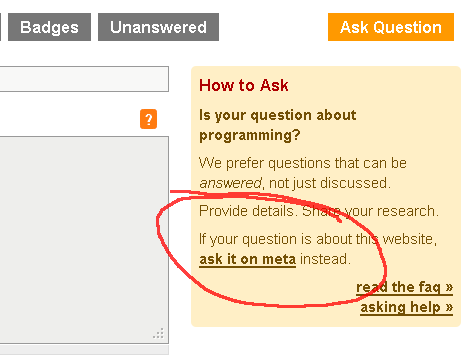 Could it be that new users misinterpret that text as follows?

You want to ask a question on this site, ask here. 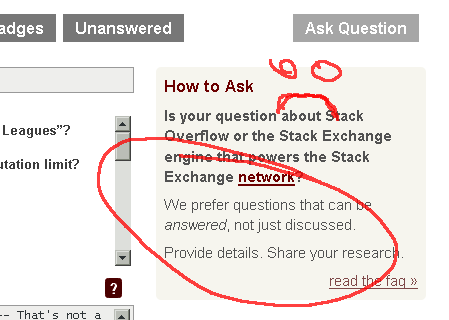 Shouldn't there be one?

If you want to ask a programming or software development question, please ask on the main site.

Change the text to: If your question is about the Stack Overflow website itself, ask it on meta instead.

That is what happened to me on my first days on StackOverflow.

If your question is about this site

is very misguiding. Since many sites just offers a FAQ or Read before you begin type guides, asking about the site itself is really misunderstandable.

Have questions about how SO works, and how it might be improved? Try asking on meta

UPDATE: For the second part of the question,

I do not see it necessary, since people who visits meta for the first time already have an idea about what StackOverflow is (probably because they already come meta from SO), or they are enough familiar with it. But new SO users do not even know that a such site like meta even exists.

The sentence they read is "If your question is about this site, ask it on meta." If my question is about C#, Perl, or any other programming language then it is not about this site, except in the case the question is similar to "Is Stack Exchange software written in Perl?" If the users read it as "ask your questions on meta," then the problem is their understanding of written English. This could explain why some users ask questions on this very site instead of asking it on Stack Overflow, though.

In the latter case, if they ask a programming question related to SE software on Stack Overflow, there is probably less damage done. The questions is then, how much users who understood the first sentence as telling them to ask their questions on Meta Stack Overflow would understand that Stack Overflow is the site they are probably looking for, when they read the second sentence?

I think that the stack network is probably very confusing to newcomers, and most users probably don't read the faq's soon enough.

In addition to the other proposals, I'd probably add a text linking to the network if other questions to other topics, i.e.

Have questions about how SO works, and how it might be improved? Try asking on meta. Is your question about ubuntu, photography, or fishing? Take a look at our other stack sites.

On the meta site there should be a link to a page about other exchange sites with a brief explanation about what kind of questions is appropriate to ask there (Yeah I know the names of the exchange sites are a giveaway but you never know...) The reason for this is simply because programming these days can overlap esp if you're in web development. Questions could be server/service related with a developmental overlap. So in my humble opinion, Stack may bring new users here, but let's not send them back without making them aware of the other exchange sites (No the exchange link on the top left is not immediately obvious :) to new users) that will be more appropriate to their questions.

This issue is becoming quite noticeable on meta, though they get closed so quickly. But here is my suggestion :

Normally when a new user attempts to answer a question on SO, a tip slides up and says :

The same could be implemented here on meta when a new user is about to ask a question. It may look like :

Just a humble opinion of mine.

31
How can we reduce off-topic questions on meta?
26
Where do first visitors on Meta Stack Overflow come from?
44
Minor change in the "ask it on meta" recommendation on the right of the "ask question" page to avoid confusion

630
Are answers that just contain links elsewhere really "good answers"?
912
Why aren't people voting for questions?
1827
Could we please be a bit nicer to new users?
404
Which computer science / programming Stack Exchange sites do I post on?
2783
A Terms of Service update restricting companies that scrape your profile information without your permission
826
Net Neutrality and Stack Overflow / Stack Exchange
2468
Firing mods and forced relicensing: is Stack Exchange still interested in cooperating with the community?
970
Firing Community Managers: Stack Exchange is not interested in cooperating with the community, is it?
737
New Feature: Table Support