One of my answers was downvoted three times and no one has left a comment, I have no idea why the answer sucks. I would like to know so that I can change it and avoid doing it in the future.

When someone downvotes an answer or question without leaving a comment as to why they think it needs be downvoted, can they lose a point? If they leave a comment then give them back their point.

Downvoting an answer already gives the downvoter -1. You don't get your rep back if you leave a comment. 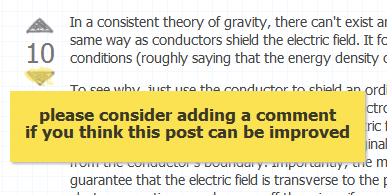 and this is all that's required. Anything more would likely lead to one of:

Your answer missed this important qualification from the question.

I didn't downvote you [Lies!], but your answer missed this important qualification from the question.

This is not a useful answer.

which could be deleted seconds after being posted. The first is useful. The second is useful, but the downvoter felt the need to hide the vote and just plain lied. The third is useless, that's what a downvote means already. The fourth is completely useless. I don't think it's likely that requiring a comment would generate lots of the first type of comment in cases where the user isn't voluntarily posting that sort of comment right now.

While one of the way cool things about SO is that it can make you a better answerer, nobody here is under any obligation to provide you, at any particular instance, with any of the way cool SO features, including feedback on bad answers. It would be nice if they did. And that is all it is, nice. Not obligatory, not enforced with rep penalties etc.

Plus, people would just type "yabba yabba yabba" or "i think this is a bad answer" or "please don't take a point off me" so you wouldn't learn anything anyway. People might refrain from downvoting, and then you would know even less about your answer than you do now with silent downvotes.

1235
Encouraging people to explain downvotes
-24
Downvoting without comment.Why it's allowed?

1235
Encouraging people to explain downvotes
282
Add the ability to ignore users
391
Why do you lose reputation for downvoting answers?
119
Undo an up/down vote after a comment is left
259
Reset votes on migrated questions
337
Don't remove the @ part of my comment
222
Allow flagging a comment after upvoting it
1261
Don't throw away all votes when a user is deleted
205
More descriptive "User was removed" explanation
427
Add an "I don't understand" option for review audits