Brock, this is GENIUS! I am hereby using my super-upvote on this feature-request:

Close votes (and probably reopen votes) only expire after all of these conditions are met:

4 days have passed since the last close vote.

The question has more than 100 views.

This has left us with a little bit of a mess: 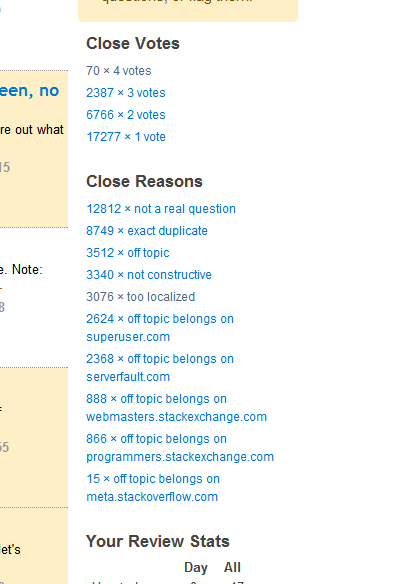 The review path now has a new a tab that can help you cut through these questions and help us clean up some of the mess. 10k only

I find that having such a huge backlog, makes it very hard to properly deal with closures.

What steps or system changes can we make to get the huge close backlog on Stack Overflow, under control?

Keep in mind, now we keep track of the user ids who "reviewed" the various questions.

I don't see the problem.

The way I look at it, there are a couple of reasons why a question only gets one close vote:

Fortunately, this nifty change handles both cases... 100 people "review" the question, and either 5 of them vote to close, or it doesn't get closed.

Now, there's a potential flaw here in that 100 viewers might not contain enough people who can vote to close to get the job done... If this is actually a problem, then the solution is simple enough: just change that 100 "viewers" to 100 "closers" - users who have the ability to close.

Personally though, I don't think it matters. A question that struggles to get even 100 viewers period isn't exactly poisoning the air on the site - no one's looking at it!

By the way: I really like your new close-review UI. And the ability to filter the list down to questions that have 3 or 4 votes already makes it a snap to jump in and salvage or slam the door on questions that really need it without the 1-vote scatter-shot problem. In other words, I think you've already implemented your solution.

Don't count close votes on low-view questions more than a month old against the daily limit.

That way the people who are really into site maintenance can clean up as many as they want, without having too much say on the questions people actually care about.

What is the problem to be solved here?

Do you actual search proposals in which way the software could be changed, or ideas how to get people to go through this list?

I think that the new Review/Close tab/function may be enough once word gets around (I didn't know about it).

Implementing this very popular but status-declined feature request would help.

Can we have the ability to rescind a close vote before it closes?.

At the moment if I vote to close then the issue is resolved then I have no alternative but to leave the close vote hanging there indefinitely.

My assumption would be that the ideal situation is that close votes happen organically, i.e. by people browsing the tag in question and seeing a question that needs closing.

The useful ones to catch via review are the ones failing due to low traffic. All the other cases ("nobody else agreed" or "going to happen naturally anyway") handle themselves automatically, without needing to go via /review.

Therefore in the /review route I'd suggest the opposite approach to the current one. Instead of showing close votes sorted by how many they've already attracted or what the reason is (which isn't really the important information) show them sorted according to when they'll expire. Offer "expiring today", "expiring tomorrow" and "this week" (possibly month too).

Within "votes expiring within X days" views you can then rank them by importance, probably number of votes / number of views is a good metric for that since it would put something with 4 close votes from 4 views right at the top, but 1 close vote from 100 would be considered very unimportant.

If you like this then there's a few other things you could consider in the "importance metric":

175
Huge close votes review queue on Stack Overflow
855
Can we have the ability to retract a close vote before it closes?
559
How about a "Vote not to close" option to counter the "Vote to close"?
132
Proposed improvement to flagging, for answers
62
What exactly happens with the button "Leave Open" (previously "Do Not Close")?
76
Close Votes expire too soon for low-traffic tags
82
Let SEDE users get hold of data on unsuccessful close votes for stats
13
Is the close system working as expected?
11
Could we split up revision queues to get counts closer to zero?
11
facebook.stackoverflow.com tools show flags on non-Facebook SO questions
See more linked questions

855
Can we have the ability to retract a close vote before it closes?
337
Distinguish close votes by reason
76
Close Votes expire too soon for low-traffic tags
107
Age close votes after 14 days, regardless of views, allowing recasting
383
Updating the Hot Network Questions List - now with a bit more network and a little less "hotness"!
2521
Firing mods and forced relicensing: is Stack Exchange still interested in cooperating with the community?
189
Testing three-vote close and reopen on 13 network sites