Quite often I have run into situations where I had an extensive talk with a newbie (about SO and/or programming itself) using the comments. Since you shouldn't use the comments to further discuss things (which are often off topic from the original question), I'd like to use the chat for those discussions.

As a matter of fact if you do use the comments to discuss something, you get a notification which tells you to move the discussion to a chat-room.

Unfortunately, most of those users don't have the required 20 reputations to talk in chat, so you also get this fancy orange box telling you that you can't move the discussion. This normally leads to using the comments again.

Don't get me wrong at this point, I'm NOT asking you to change this (I actually think it's a good thing).

My idea would be, that a user who has enough reps to talk in the Chat should be able to invite a user who doesn't have enough reps into a private Chat-room (just for the two of them).

The user with the <20 reps would only be able to talk in this very room, e.g. would receive a "temporary privilege".

Edit As nhinkle pointed out, this is already possible but you need to be Moderator and it requires multiple steps. This gave me the impression that it shouldn't be that difficult to realize.

Diamond moderators only can add <20 rep users to chat. Here is what you must do: 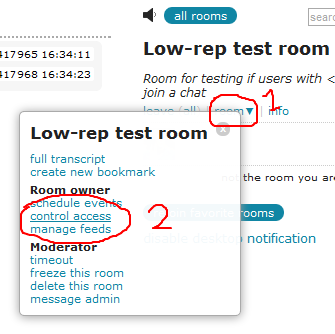 Not the answer you're looking for? Browse other questions tagged feature-request chat new-users .

28
Chatting to users with limited rep
49
I'd like to propose that users with high reputation be able to chat with users with low reputation
79
If users with <20 rep can't chat, why does SO nag me to move comment threads to chat?
1
Automatically grant "control access -> enter" to low rep users on "convert to chat"
2
Can we allow users with 1k reputation (or something) to grant users without the reputation access to a specific chat room?
1
Please use chat room - only you can't

993
Show all of my question/answers to me even if they are deleted
193
Provide a tool for moderators to migrate comments to chat
93
Disable chat migration notification if one of the users has insufficient rep?
167
Invite low rep users to participate in chat
194
Should "move-to-chat" be provided on demand (as a button perhaps)?
1250
Don't throw away all votes when a user is deleted
127
Could mods have "add comments to chat" to supplement "move comments to chat"?
325
Toward a philosophy of Chat
387
If you're gonna talk Politics, you must respect those who disagree