Remove withdrawn candidates from the primary

The Stack Overflow moderator election primary has begun, and there were several candidates who were immediately withdrawn (didn't meet badge requirements perhaps?).

Whatever the reason, they all have position statements that are effectively just taking up space. They're completely unactionable.

Can nominations that have been withdrawn be removed?

feature-request election moderator-primaries
Share
Improve this question
edited May 23 '17 at 12:36

I don't think we can completely remove them, because doing so would conflict with an important part of the blurb in the election page's sidebar:

The candidate vote scores are all public.

Since all votes cast to nominations are public, they arguably have to remain accessible somehow even if a nomination is withdrawn further down the line.

However, position statements in withdrawn nominations are indeed unactionable and do make up the bulk of the post. I second you on that point, and would suggest we only hide the position statement but keep the candidate's user card and vote count visible, albeit dimmed in the usual way. 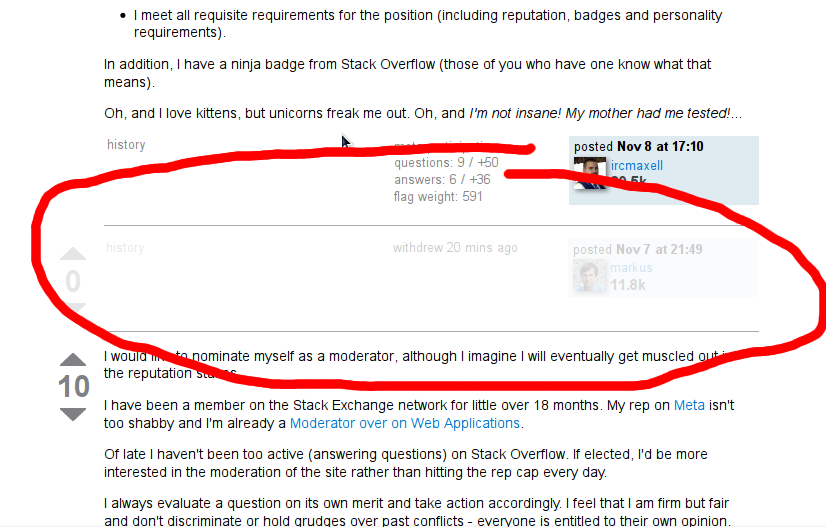 EDIT: Another candidate has chosen to delete his position statement himself before withdrawing, which achieves the same effect.

5
Weird candidate block on primary election tab
32
Push faded/withdrawn candidates to the bottom of the page
-10
Should Moderator Election rules be changed?
10
I never withdrew

32
Push faded/withdrawn candidates to the bottom of the page
17
Proposal for Amendments to the election primary
333
Don't remove the @ part of my comment
13
Should the primary phase of the election be eliminated?
274
Let's disallow moderator nominations from people who've been suspended in the past year
12
Completed elections don't show all candidates in the primary phase
54
Suspended user shouldn't be able to run in an election on the site they're suspended on
56
Moderator Elections functionality: voting UI, commenting and flagging