Can we have a feature to delay a flag for a short period of time?

As a moderator, sometimes it's nice to defer a flag but not have it in the mod-queue. There are various reasons, but the simplest is that if the (1) count is static, you kinda gloss over it, but if it disappears today and reappears tomorrow, we're not going to gloss over it as often.

This is particularly useful when true resolution of the flag depends on actions from other users. You sometimes need to give people time to act on a comment the moderator left before truly resolving the situation.

So, can we have a way to delay a flag for N hours?

Given the following Q/A flag types:

Not an answer (NaA): Can be postponed, additional similar flags revoke postponement

It doesn't belong here (IDBH): Either it's game for migration or it's not. Same goes for OT. If it's "meh", put it on meta and dismiss the flag until concensus is reached via discussion (at which point you already have a link to it).

Spam: If the mod can't do something right then then they should dismiss and annotate.

not constructive / off-topic (OT), obsolete, too chatty: same as (ro)

other: The only possible postponable one?

For those that do postpone:

For those flags that do get postponed, we should set a limit on postponement. Since the easiest way is to see if the flag already has a previous postponement, trying to postpone a second time seems like the easiest check and sounds like a good starting point.

And if we go that route, maybe instead of a dismissal we can have a button to insert a canned response "I won't honor the flag for (NaA|LQ) until someone from the community tries to make this post better" or something. But the dismissal should still count as a dismissal (negative flag weight score). Canned responses often suck, but we don't need a lot of commentary here, just mostly "no, you fix it first, then ask me to fix it". Also consider including a link to the "moderators are human exception handlers, not the only fixit men on the site" ;-)

"Hey folks, someone flagged this q as offensive to all senses - but strictly-speaking, I can't taste the rot yet. Maybe you spend 5 minutes and clean this up before the next guy flags, and I don't delete it with prejudice?"

As I noted in chat, I'm not really wild about this...

Make it too easy for mods to kick the can down the road, hit the snooze button, and... They just show up late for work. Mods are supposed to be the exception handlers - the last resort when things go south. Throwing so much work at them that they don't have time to think about what they're doing is a problem - but the solution isn't a system that lets the rack up "flag debt" for later.

In fact, the longer I think about this, the more I suspect it's just codifying an existing "antipattern": marking a flag as helpful without actually doing anything to resolve the problem.

Not everything requires moderators to actually use moderator abilities. Sometimes, leaving a comment and walking away is the appropriate action. A flag can still be "helpful" in this case. OTOH, if there's really nothing needed (flag'd as rude because flagger didn't like the answer, flagged as low-quality because of some missing minor punctuation), the flag should be straight-up declined - no reason to defer the problem to someone else or some other time.

So about a year ago, we started discussing this internally. This isn't something that's a high priority for us to implement, but it's worth keeping in mind in case other development work makes such a thing easier. In the interest of furthering public discussion, I'm posting the notes we took. Again, I don't see this happening in the near future, but feel free to comment on this or edit in improvements if you come up with something clever.

Scenarios for deferring a flag (or creating a flag for future consideration):

I’m starting to think this should be called ‘defer’ rather than ‘postpone’ or ‘snooze’. It’s more indicative of waiting for more information rather than just “postponing” a bit of work.
The ‘attach note’ interface should use the same minimum-length requirements of our comment interface.

Allow mods to defer action on a post, with a scheduled time and action item note The “action item” note is not made visible to the original flagger - only moderators can see it.
When flags are resurfaced, the deferral time and reasoning will be clearly indicated next to them, e.g. “Flags deferred on 10/23/2013 - I’m taking a wait-and-see approach - by Shog9”
The existence of deferred flags is visible to moderators handling new flags raised during the deferral period
Deferred flags should have no default action (deferred spam/offensive flags do not delete the post)
Flaggers should not be able to re-raise deferred flags
Status of deferred flags will be either explicit (“deferred”) or helpful - with a dismissal comment indicating the time after which a moderator will revisit the issue.
Deferred flags will eventually have their status updated to “helpful” or “declined” based on the actions of the moderator after the deferral period has ended. 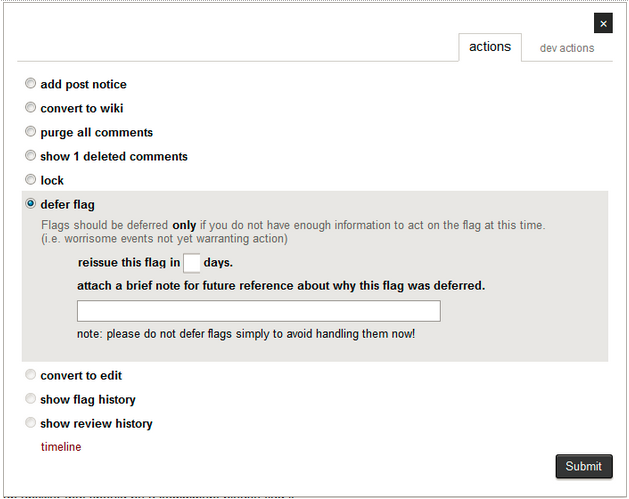 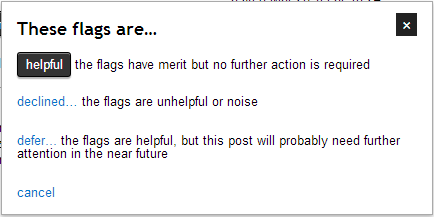 Clicking defer would bring up a form that let you enter a delay and a description:

The time-period will be limited to 7 days at most (1 day at min); at least 15 characters must be entered in the description.

When the time period elapses, a new flag will be raised on the post, with the creation user set as the moderator who deferred it and the description set to the note that was entered.

There are a lot of times when an answer needs clarification or cleanup by the original poster. The question may be inadmissible in its current format, but could have potential. In this case, I can:

For the third course of action, I can either dismiss the flag as helpful and try to remember to come back the next day, or I can leave the flag in the queue.

I don't like leaving flags in the queue. Whenever I visit and see that little yellow (1), I want there to be something actionable. I really don't want to find out that the question was fixed and the flag cleared by another mod, and I ignored the queue because I thought it was just waiting on an improvement to the previous question (which is probably still on the front page).

Still, this use case is common enough that we occasionally use the flag queue as our personal todo list, and (as a mod) flag a post we come across and comment on as "Check back on this tomorrow."

Not everything can be dealt with "right now". As we're trying to nurture an SE 2.0 site to Stack Overflow proportions, we can't throw away content that needs improvement; we'd rather give the user a second chance. I support this proposal because it will help mods grow sites and train users.

I am a frequent flagger (709 flag weight) and I've really wanted a "delayed flag" or "delayed close vote" for my own use.

I love reading new questions; I'll often see a bad question and leave a comment for the user asking for more details: source, output, error messages, references, whatever. I want to give questioners an opportunity to improve their post before it gets voted into oblivion or closed.

Thus: I'd like a close vote / raise flag option that gives the user an hour to make corrections. If there's no edit, the close vote / flag "goes live". If there is an edit, my vote or flag is rescinded with no consequences and without ever alerting anyone.

I don't think it should be a default -- I really like that we can destroy spam posts in two or three minutes -- but I want something to give users the benefit of the doubt and some time to fix their problems.

I agree with this, I was proposing the same thing myself.

What I'd change, however, is that "too chatty" is absolutely something that might need deferred resolution. Consider Where did all the comments go on "Is `*--p` actually legal(well formed) in C++03"?

In several cases, it's become apparent that a diamond mod has rushed to take action on a particular question, answer, or comment thread, because they were afraid of "losing track" of it if they didn't take action before moving on, and then the problem wouldn't be dealt with at all.

Therefore, I propose a time delay flag, "Flag for followup after n hours" (where n should be provided in options of 2, 6, 12, 24, 48, 72) so that a moderator can give the community some instruction on how to clean up / improve, then leave sufficient time before taking action. Until they come due, these flags won't appear on the moderators' flag queue at all.

This would give the moderators a way of eliminating time pressure on a particular cleanup action, give the subject matter experts in the community a chance to make edits better than a mod would, or provide input on a mod decision before it's finalized, without worrying about things spilling through the cracks.

I'm not sure whether it would be useful for the flag to come back to the same mod only, or appear in the general queue, or have an option at flag creation time. I'm of the opinion that the flag should go out to all moderators when it comes due, to increase the chance of a second opinion.

Some examples of where follow-up would be needed:

In all these cases, final action needs to be delayed by hours relative to when the problem is identified and a comment left advising the community on what fixes are needed.

The delay time should decrease with each additional flag. Perhaps by 1, 6, or even 24 hours.

For instance, delaying a post for 3 hours should become 2 hours if another person flags it. Possibly extend this to include edits.

Not the answer you're looking for? Browse other questions tagged feature-request flags moderation moderator-tools .

15
Can we have a snooze alarm for flags?
71
How to train your growing community to self-moderate?
75
Moderator Flag Dashboard soft launch
30
Where did all the comments go on "Is `*--p` actually legal(well formed) in C++03"?
45
Give mods a "flag for followup" flag ability
18
Allow moderators to leave themselves reminder notes
12
What is "active" in flag summary?

852
Can we have the ability to retract a close vote before it closes?
167
Add escalation system to chat flags
162
Flags in chat are defective by design
299
Add optional box for spam flags letting you say why you think it's spam
119
Make comment flags less stupid
55
Terminate the editing grace period when a post receives a flag
420
Can a machine be taught to flag spam automatically?
173
A machine can flag spam automatically. Can it do better?
40
Can we introduce comment flag bans as we have for posts flags?