Codeken 2011 - where was Stack Overflow?

When Stack Exchange announced the cancellation of DevDays, many asked for an alternative event to take place in its stead. Some community members, most prominently VonC who was also set to be a speaker, started drumming up support for it, looking for a venue etcetera. The Meta question was frequently updated throughout the process.

Eventually, Jon Dickinson offered to take care of organization, and CodeKen 2011 was born. And it was a blast! Perfectly organized in the London Docklands, with Wi-Fi and great catering, it featured top-notch speakers (almost 100% the original lineup), and the relatively small number of people made for a cozy and informal athmosphere. There is talk of one happening next year too.

However, not present at all was - Stack Overflow!

The facts as far as I managed to find out (please correct me if I have something wrong):

Now, of course there was no obligation for SO to sponsor Codeken or be there or to do anything at all. Also, some things may have fallen under the table because Jon is not a SO veteran.

Still: taking all these facts together, it looks like a bit of a disappointing display on SE's part. I mean, there's an event that was clearly going to be attended solely by very dedicated Stack Overflow users and SE doesn't acknowledge it publicly at all?

What the hell happened here?

First, I'm glad to hear that you had a terrific time at the event. It sounds like everything went off well and hopefully we can work with CodeKen on the next iteration.

I'm saddened to hear that you felt like we didn't do anything to support the event when in fact it was the opposite. I worked directly with Jon to ensure that the event handover went smoothly. Including, but not limited to, providing contacts to the original speakers as well as their content. To say that recruiting and organizing the DevDays agenda was extremely hard work would be an understatement. Once the CodeKen website and agenda were finalized, we sent an email to DevDays registrants encouraging them to attend. So while our support may not have been as public as some of the other sponsors,we enthusiastically supported CodeKen in any way they asked.

Ultimately we had a great working relationship with Jon and look forward to working with him on (what we hope is) the next of many CodeKens.

We had a fantastic time at the conference. It was one of those rare occasions where you have great speakers and an extremely knowledgeable and engaged audience. I had a number of speakers praise the level of follow up questions they got from the audience throughout the conference.

I can confirm that Alison was extremely helpful, introducing me to a number of speakers so I could follow up to confirm they would still present. I also believe that the email Alison sent out to people who had already signed up for the London event was instrumental to getting the numbers we needed to make the event happen. I made a point of thanking SO in my opening talk, which you should be able to see the videos of soon!

We will start planning the next CodeKen event in the new year and we would be thrilled to have SO involved with future events.

Just for the record, this is what you missed: 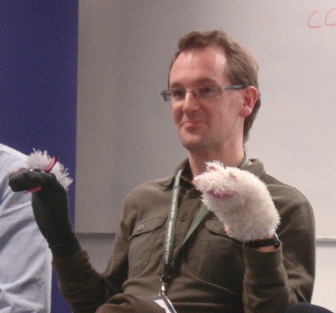 (On the left: Tony the Pony. On the right: EvilCode HenchKitty)

Not the answer you're looking for? Browse other questions tagged discussion devdays devdays-2011 devdays-london .

26
DevDays cancelled - should we have a London meetup anyway?
5
Stack Exchange Presence at Local Conferences?