There are a number of questions where this particular user includes what should rightfully be a tag in the title:

That said, I know it helps with SEO and all, but I look at the title and think it's kind of crap, especially since the most popular tag is already included in the HTML title of the page.

The question is, are we encouraging, discouraging, or neutral when it comes to these types of titles.

Or another way, is there a case to edit it out (or flag, or mod message in the case of abuse) or should it be left alone?

Tags added to the title could be fine, when they are correctly added in the title.
For example, between these titles the first is more acceptable.

How do I integrate Drupal 7 with Zend Framework?
How do I create a list of users that logged in the past week? Views 3, Drupal 7
[Drupal 7] [Views 3] I cannot get the list of users blocked in my website

What the users probably forget is that in the list of questions, the tags are visible too. There is generally no need to add tags to the title too, as who see the question is able to see them. 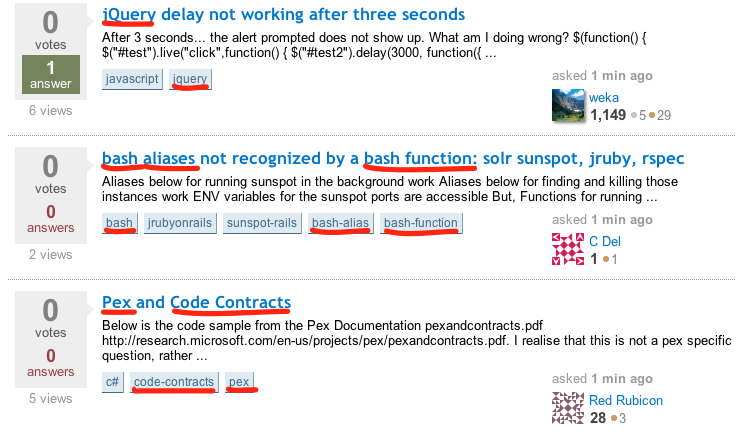 I think that the case of the tags in the title is the same for titles without tags: The title should be clear enough to understand what the question in, considering that the question title cannot include all the necessary information.
The last title in the screenshot is a bad title, independently from the fact that on Stack Overflow there are both pex and code-contracts. Supposing that I am asking a question about a library for which there isn't yet a tag (let's call it, "TheCoffeMakerLibrary"), the fact there isn't a tag for that library is not a reason for titling the question "TheCoffeMakerLibrary and my compiler."

The question title should stand on its own without the tags.

Really, any question can be boiled down to tags. What is left for the title then (examples near the bottom)? Why bother having the title at all? If anything, take the tag out of the HTML title.

As far as I'm concerned, the tags should primarily be for following and searching. At the very least, putting specifics that should also be tags into the title is necessary for knowing what the question is actually about in places where the tags aren't specified, like the "Related" column on the side of the question page, and especially in the "Questions with similar titles" box when you're asking a question. And let's not forget search engines. It's not just SEO; assuming I found a result in a search engine, but it didn't have the language or relevant specifics, the title doesn't tell me whether answers are likely to answer my question. If one is asking about how to use some feature in, e.g. Haskell, and a bunch of questions with similar titles (because all the specifics are tags) pop up but they're all in Java or C, or even Ruby or Scheme, why bother having the suggestions?

The particular version of the language should, however, not be in the title unless the question is specific to that version, for instance a language feature introduced then.

Let's take those titles you pointed out:

Possible tags: [generate] [list] [string] [sliding-window] [itertools] [yield] [iter] [python]
Remaining non-tag ideas: nothing.
Obviously this is too many tags to tag the question with all of them, but which should I include in the title? How do you justify putting any of them in the title if you don't want tags in the title?

Tags: [function] [file-io] [xls] [python] Non-tags: nothing
This one is fully taggable. Why bother having a title at all?

Tags: [function] [file-io] [exception-handling] [python]
Non-tags: nothing. What's there to distinguish this from the previous question? Especially if the problem with the previous is that it's throwing an exception, perhaps it should be tagged with [exception] too.

Not the answer you're looking for? Browse other questions tagged discussion title .

317
How do I write a good title?
35
Why is the first tag sometimes in the <title> tag of some questions?
8
[Titles] Should the most relevant tag be included in the title?

282
Should questions include “tags” in their titles?
9
Strip titles from canonical URLs
182
Why can't we use the word “problem” in titles?
190
Let users with sufficient reputation use “problem” in titles
78
Titles should be stand-alone summaries of questions *without* depending on tags
8
Update suggestions when asking a question using tags
2762
A Terms of Service update restricting companies that scrape your profile information without your permission