Are we rewarding moderators enough?

In the days and weeks before a moderator election, the community applies great scrutiny to all candidates. They need to jump through a series of hoops, answer hard questions in the town hall meetings, and have to convince the audience of their good character and judgement - almost like in a real-world election for a seat on the city council, or a judge's post!

After the election, however, we seem to forget about them unless they do something scandalous. In general, that is a good thing and by design - the basis of Stack Overflow's moderation is being an invisible hand in the background, so most of the moderators' activity will go unnoticed.

Still - once they quit the post, there is not much left to thank them for their service. For example, Gumbo and SLaks withdrew from the post before last election, and received little in terms of thanks from the community. That's not meant as criticism - I, too, read the post, and somehow didn't feel like adding my thanks, either - for whatever reason, I don't really remember, it somehow didn't feel fitting. But it is a little bit unceremonious and not really reflecting the work they put in to keep the sites clean - and I'm sure being a mod is much, much more like work than it is to just be a power user. As a mod, you are expected to show up frequently, and process some amount of flags.

I think after a year of service with a good track record, moderators should get something nice and special. Inviting every mod to New York City would probably break the company's budget twice, but there are smaller ideas that might also be nice:

What do people think? Am I alone in seeing things this way? I'm not a moderator so I don't know for sure of course, and I've never heard anybody complain. I'm just thinking there could be a bit more recognition.

It goes without saying that additional ideas are welcome.

Actually, we pretty much do get all this. Our badge is our diamond, we always can prove we are/were mods, we do get swag... 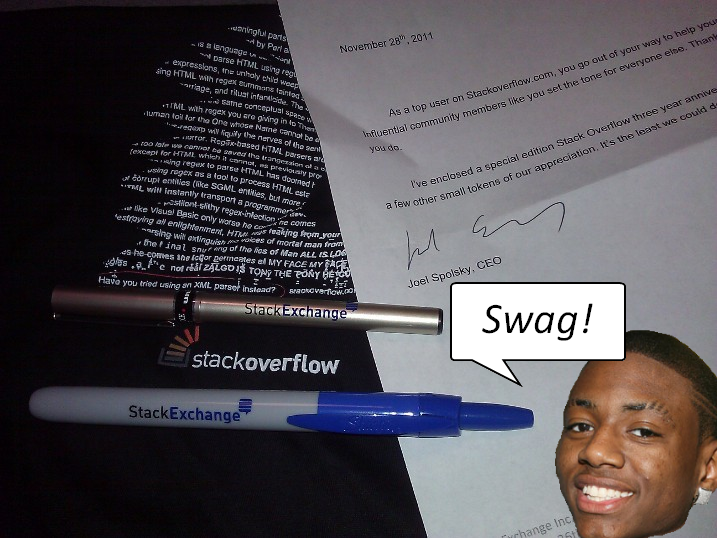 and even neato moderator business cards! 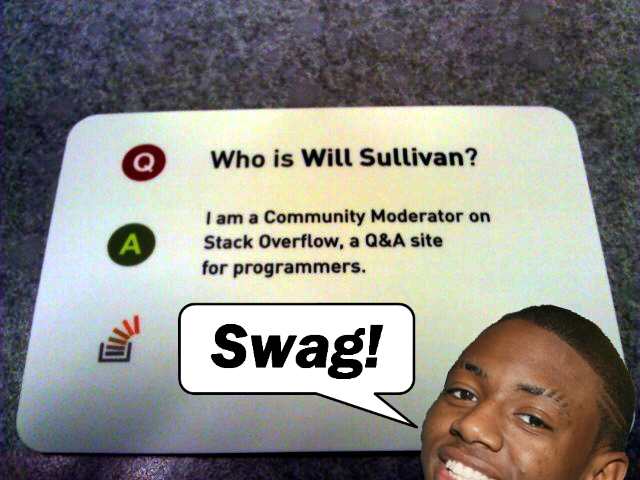 And who needs a friggen book when we have StackMotherEffingOverflow?

Appreciate the sentiment, but we're k. Though, I wouldn't mind getting all rep from a user when I destroy their account. Wouldn't be more than 1 or 2 rep points, but it they would taste oh so sweet.

At the very least, a gold badge.

This seems risky; people love badges, and it wouldn't surprise me to see people run in elections just to get that shiny gold badge. It also kind of sucks to have a badge that most people by definition won't be able to earn

This does happen (or at least has the last three years)

A special piece of swag reserved for moderators (and bound to fetch a fortune on EBay in ten years ;)

This seems logical. SE 2.0 mods got t-shirts at one point (I can't remember if it was for running in the election or for winning), but then they went on sale in the store, which kind of ruined the effect

It may not be public all the time, but even being one of the mods everyone loves to hate on Programmers, I've never felt like Stack Exchange has neglected or under-appreciated me. We are in constant (like, several-times-a-day-can-get-someone-almost-24/7) communication with SE's comm team and they have generally been responsive if not supportive of moderation issues.

To your specific suggestions:

If I'm totally honest, what SE does or doesn't do is nowhere near as demoralizing as checking in on a meta-discussion site to see someone characterize something we do as evil, destructive, or tyrannical. We're just regular users who just happen to have the responsibility of making unpopular decisions from time to time.

The best token of appreciation the SE community could give is to treat us as such: every time I see a well-reasoned meta-discussion post that talks exclusively about a specific issue in a constructive manner instead of demonizing the people involved in the issue, it makes my day.

Not the answer you're looking for? Browse other questions tagged discussion moderators election .

91
Could we please be a bit nicer to moderators?
17
Can we get a Stack Overflow meme sticker?
-18
Why doesn't Stack Exchange pay users who contribute the most?

188
Allow ex-moderators to opt-in to having a mark on their profile indicating they were a moderator
2779
A Terms of Service update restricting companies that scrape your profile information without your permission
824
Net Neutrality and Stack Overflow / Stack Exchange
444
Employee profiles are now marked with a “Staff” indicator
2456
Firing mods and forced relicensing: is Stack Exchange still interested in cooperating with the community?
715
Dear Stack Exchange: a statement and a letter from your moderators
960
Firing Community Managers: Stack Exchange is not interested in cooperating with the community, is it?
794
Thank you, Robert Cartaino
549
The company’s commitment to rebuilding the relationship with you, our community