This is sort of a two-in-one bug.

I was viewing the summary tab on Jarrod Dixon's profile, and all his accounts were listed as they should be under "Accounts." However, he should be a moderator on all of these sites, and only Area 51 had the moderator icon (♦) next to it: 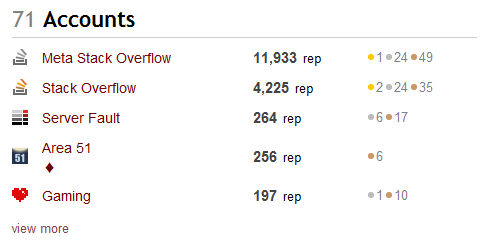 I clicked "view more" to see the rest of his profiles, and they all have the icon next to them:

I went back to the summary tab to find that it had fixed itself: 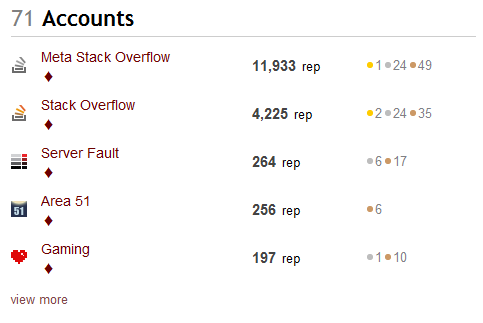 That's the first bug. Any reason this happened?

EDIT: This happened again in Chrome. Looks like it happens periodically.

And on to my second bug. You'll notice that the ♦ icon skips a line for every single site. Given that this is happening to all of them, is this by design?

The styling of the link in the account panel (in case of a really long site name) has an explicit width for the elipses overflow...so a span with the ♦ after that was creating another line.

This will be fixed in the next build. I'll take a look at the mod status loading (without loading the accounts tab first)...we don't cache this at the network level, so it's not in the "cheap" call...we'll see if we can load this in a cheap way in the future.

Update: we have a plan here, there's some additional work we need to do in the background, but diamonds will appear in the panel as well as the tab correctly in the future. This will backed by dogfooding our public API v2 (currently in private beta), so we'll be displaying the same data any third-party app could.

It'll remain flaky for a bit (not displaying diamonds correctly unless someone hits the full tab for that cache load), but the result of being API backed will be better for all involved (bonus: and result in a faster accounts tab load, in the case of a cache miss).

Updated update: The accounts views are now switched over to APIv2, diamonds should display everywhere correctly on the first load now.

Not the answer you're looking for? Browse other questions tagged bug status-completed profile-page moderators .

4
In “Accounts” section of user pages, indicate which sites the user moderates

10
Moderator actions in activity tab
304
We're working on a new stat to help convey the reach of your posts here
276
Make moderator messages anonymous
444
Employee profiles are now marked with a “Staff” indicator
2442
Firing mods and forced relicensing: is Stack Exchange still interested in cooperating with the community?
107
Will we really have “democratic” moderator elections?
194
Introducing the Moderator Council - and its first, pro-tempore, representatives