I just got rid of a question ban, after doing some stupid stuff when I just got on meta. I asked a question which got closed because it was a dupe of a whole lot of other questions. After that, I posted a suggestion, which had 1 upvote, and four downvotes. That was all my activity on meta.

After posting some constructive answers here again, I regained the right to ask questions. Although I know that I'm risking to get downvoted into oblivion again, I'd like to suggest an 'agree/disagree' button. This time, I have searched meta, and was not able to find any suggestion like this.

When I had been banned, I was looking at a lot of questions discussing penalties and meanings of downvotes on meta; Some say that a downvote has an ambiguous meaning, they can mean either that your question is low quality, or that people disagree with it. Some say that it is just unclear what it means. To clean this meaning up, I'm suggesting these buttons. They could be a thumbs up and a thumbs down buton or something, to distinguish between agreement and question quality.

Disagreement would only remove 1 rep from the asker, and would be free for the downvoter, while downvotes remove 2 rep, or as suggested in other feature requests, 5 or 10.

The only problem I can see, is that this goes against the 'don't make me think' rule in UI design. Users now need to learn even more, because they need to know the difference between those icons.

Another way this could be implemented, is by changing the influence of votes based on the feature-request, bug and discussion tags.

I personally think the voting buttons on meta should just be changed to a thumbs up and thumbs down, to more accurately suggest their actual usage.

I both disagree and agree with the goals of this request

What does meta rep mean any way. Do you really want to be recognized for

The silliness of Meta rep is evidenced by the fact that rep on the meta 2.0 sites reputation is entirely derived from the parent website. I suspect that the only reason Meta.SO doesn't do the same is related to its history and that its essentially the same as Meta.Stackexchange.com

Clearer meaning to what a downvote means - Agree

This question shows research effort; it is useful and clear (click again to undo)

This question does not show any research effort; it is unclear or not useful (click again to undo)

Perhaps somthing that was in line with the FAQ e.g.

I also think Robert's suggestion to change the button images is good idea too.

IMO, the problem is not how much reputation you lose when you get down-voted on Meta Stack Exchange; the problem is having a question ban for asking a feature request other users didn't like.

Being down-voted could mean not having understood exactly the purpose of an existing feature, but it could also mean that other users don't see the need of the proposed feature, or they think that feature would be take more bad effects than good ones. In both the cases, nothing is said about the quality of the question.
Vice versa, the fact a question is closed as off-topic, or not constructive says more about the quality of the question. In the first case (especially if the user has more questions closed for that reason), it means the user doesn't understand the purpose of the site; question banning a user with too much questions closed as off-topic avoids the user keeps asking questions that should not be asked on this very site.

The question ban should be differently calibrated for Meta Stack Exchange.
I would not question ban a user because he asked four feature requests that were down-voted, and got a score of -4. IMO, having questions closed as not constructive is worse than a feature request that was negatively received from the other users.

There's a very big difference between asking a bad question, and making a suggestion or a discussion comment that people disagree with.

The rep system on meta confuses the two. We should differentiate between:

Low rep = ban from asking questions. There are places in the world where they ban people with opinions different from their own (or the majority for that matter). There's a reason I don't live there.

Bottom line, I feel your pain and agree :) 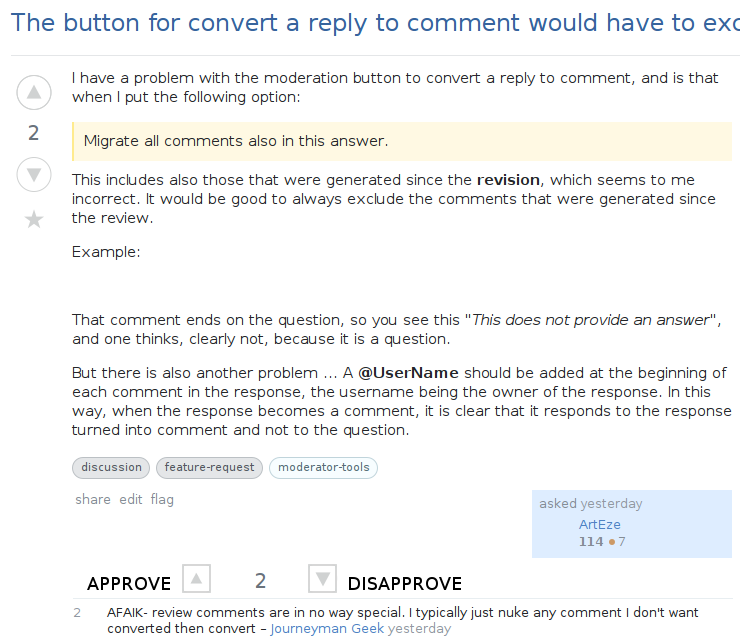 The approve–disapprove — or agree–disagree, or favor–disfavor — value for each post is only displayed when the post is being reviewed. Listings will continue to show the good–poor value.
Reputation is neither awarded nor spent for any user as a result of voting approve–disapprove.

All answers posted on Meta sites, including here, would have such a function. Questions should not, however: If you disagree, then you either post an answer or you vote approval on one which was already posted.

Despite what some may think, reputation does matter: it is a measurement of a user's competency with operating a Stack Exchange site.
A person's radical ideas, or their unwillingness to follow or to merge with the mass of other users, does not indicate them to be poor users of the meta.stackexchange.com website. As it is now, don't you run the risk of stagnation and idealogical cultivation analogous to inbreeding?

It might be difficult, especially at first. The problem, of course, is that most established users are habituated to the voting buttons as they are: you'd need to change those in such a way as to not hide them but require the users to relearn how to vote. This wouldn't really confuse things all too much, though, especially if the interface design is obvious. Most of the people here are intelligent enough — or claim to be.
We could always smooth the implementation with a guided introduction that prompts the user if they seem to be neglecting it. Et cetera.

What benefits would be gained with this? Well, admittedly most of them would occur with people who already use Stack Exchange: because it occurs on the Meta sites, it would be less obvious to new users.
The benefit would be with supporting a diverse and adaptive population of users: the purpose of a moderator is not to quash unpopular views but to ensure that things are legible and tidy; allowing moderators to gain reputation through a demonstration of such traits or skills should be distinct from their ability appease or even beguile both the present moderators and the masses of other users. People are people: whether you gate the fences liberally or conservatively, there are risks with either scheme.

Why don't they Have a "Quality" and a "Agree" sections? They will be manged separately. I know this is what everybody else is saying, but I just wanted to point out that you could make it easy to use, too. I would put this in a comment box, but it wouldn't fit. I think the "Quality" one is like the current voting system with the reputation, and the "Agree" is just like a public opinion of agreeing/disagreeing with the post. However, I think someone should not lose reputation just because someone disagrees with them. This makes people on Meta reluctant to post in fear that they will lose their hard earned reputation.

Just Clarifying: No one will lose/gain reputation for "Agree" but they still will in "Quality".

I am not saying this should be the exact format and look, but it is a general representaion of what it should be. I made this chart on http://www.asciiflow.com/ .

This could be implemented on other Stack Exchange sites for things like poor coding, etc.

Not the answer you're looking for? Browse other questions tagged feature-request voting .

2
Separate vote in favour and against a feature request
1017
What are "Community Wiki" posts?
200
Change upvote/downvote tooltip on meta sites
21
The reputation system on Meta Stack Overflow is somewhat weird to understand
10
How does reputation between the main site and its meta work on SE 2.0?
-12
Is it a bit cruel to down vote feature-request questions which cause the OP to lose reputation points?
-4
Allow users with lots of rep (3500?) to promote “comments” to “answers"
-14
Improvements to reduce the number of non-answers
-3
could edits be partially approved?
5
Suggestion was tagged with status-declined and keep getting downvotes
See more linked questions

859
Allow an edit to notify downvoters: "I think I've fixed the issue now - please check"
200
Change upvote/downvote tooltip on meta sites
417
Decision on rejected edits should be displayed as a notification to the editor
258
A real solution to ambiguous tags
1240
Don't throw away all votes when a user is deleted
289
Let's stop displaying a user's accept rate
180
Don't lock votes on Meta sites
416
Add an "I don't understand" option for review audits
305
Build and strengthen the Stack Exchange community with "crossover questions" between sites
23
Please revisit the downvote/upvote tooltips on meta sites