What is this pop-up?

When I looked at the chat FAQ and clicked the link to take me to Sandbox I got this pop-up, which seems a little bit odd: 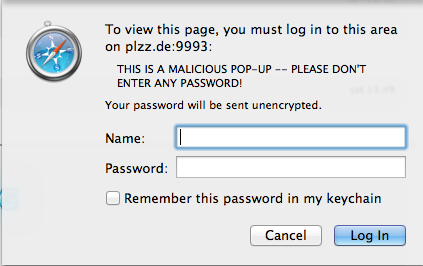 Now, when I Googled plzz.de, I found a website about Stefano Palazzo, who happens to be a Stack Exchanger. When I added :9993 to the web address, I got the same pop-up.

So I ask you: What does it mean, why is it here, and is it supposed to be here?

Stefano was illustrating a potential exploit where returning an 401 Authorization Required status for an image resource (which you can embed, say, in chat) will cause certain browsers to show the authorization dialog, which could cause some unaware user to mistakenly disclose some sort of credentials.

That message should probably be removed now that he's illustrated his point. Ideally the browser shouldn't be showing that dialog at all (Chrome started preventing the dialog from appearing in this case in May of last year), and Stefano filed a bug report for Firefox to that effect.

So, to more directly answer your question: It means that your browser is vulnerable to the exploit (if you consider it an exploit), it's there because Stefano wanted to bring it to the attention of the Stack Exchange developers, and it probably does not need to be there any longer, since the point has been proven.

Stefano Palazzo posted an image that caused it to demonstrate a security vulnerability. He explained it here:

@balpha here's a security vulnerability
I can't think of a fix though (: (possibly do a HEAD on images, remove if it looks suspicious)
(this is the code, it's completely trivial: paste.ubuntu.com/788593)
and sorry to everyone else for the annoying pop-up

I deleted the message, so your browser won't request the image anymore and you won't get the popup

Not the answer you're looking for? Browse other questions tagged support chat popups sandbox .

678
How do I get attention for one of my own questions without a good answer?
911
What are “Community Wiki” posts?
89
May 13, 2010 updates break high contrast Windows mode
755
What are the badges I can earn on each site, and what are the exact criteria for earning each badge?
819
What does “user was removed” mean and why did my reputation change because of it?
6
Links to comments from review don't onebox
322
Toward a philosophy of Chat
97
Test the new mobile chat!
375
If you're gonna talk Politics, you must respect those who disagree