Is there a way to find answers that I have accepted but not upvoted?

If an answer is accepted it often should also be up-voted because it is helpful. However, you might forget to up-vote it even though you are reminded to (also if you have less then 15 reputation you cannot up-vote). To correct such mistakes, it might be useful to have an effective way to find answers that you have accepted but not up-voted. As far as I know, there is no way to track which posts you have voted on and, thus, there is no way to find accepted answers that you have not up-voted (I take this to be to enforce anonymity of voting). So I wonder if there still is a way to find answers I have accepted but not up-voted?

A similar mistake to forget up-voting accepted answers is to forget accepting up-voted answers. There is an effective way to spot this mistake. Questions for which you have accepted an answer are easily distinguished from questions for which you have not an accepted an answer by them differing in color in the question list. You can also easily find them among the search hits for "user:me hasaccepted:0". The same does not go for answers that I have accepted but not up-voted because typically most of your questions have accepted answers so you would have to go through them one by one anyway.

If an answer is accepted it should be upvoted because it is helpful.

An answer may indeed solve or help you solve your original problem, but it might not be an otherwise "good" answer. The accepting and up-voting are different actions which mean different things.

As a contrived example... 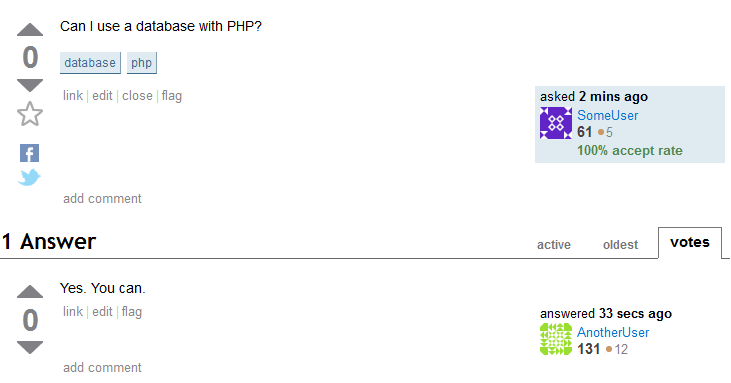 SomeUser could reply with something like, "Ah, now I found how it works! Someone told me I couldn't, but you're right! Thanks!" and subsequently accept the answer because it answered the question. (And because he wants to keep that 100% accept rate, since the accept rate police have told him that he should accept more answers.)

But is it a good answer? No, not by any means. It's a terrible answer to a terrible question. It should be thrown out with the bathwater.

Again, it's a contrived example. I'm assuming none of your questions are that bad, otherwise I'd hope they were removed long ago. But the point remains. Someone can provide an answer which helps you and in some way leads you to solve your problem. That's generally grounds for accepting an answer. But it may, to the community, be a bad answer. Not generally grounds for an up-vote.

I guess my point is... Don't feel obligated to up-vote just because you accepted, nor to accept just because you up-voted. While the two actions are often applicable to the same post, it's not a flat rule. Use your better judgement accordingly.

Not the answer you're looking for? Browse other questions tagged support accepted-answer up-votes search .

5
Commenting on user Question like : increase your accept rate first