My Pro-forma comments script has now gained quite a following (and it - allegedly - just got bust by upgrading to jQuery 1.7.1). This is a personal request to the team to consider adopting it.

Not that I don't wish to keep on maintaining it, but the next step (allowing users to define one global set of comments to be used across all their sites*) is pretty awkward for me to implement "from the outside", but would be comparatively trivial for the team (I believe).

Goes off to fix script...

* Note: I have a beta half-version of this; it requires two separate userscripts, and allows you to push/pull between "local" (site-specific) and "global" storage. And even if I get the global sharing 'properly' working, it would still only be for a given machine.

I agree, it's time for this.

And to those fearing that this tool would encourage hasty, incorrect comments: The same thing already happens every day - just with much more cryptic messages like "escape your input" or "use xyz library" that more often than not, leave the OP baffled and none the wiser.

This functionality does not add anything dangerous that you can't do already. It just helps automate a terribly, terribly dreary task and this is needed! Let's face it: We have 4,000 new questions a day, and not enough users, time, nor the inclination to deal with every one on an individual basis. That includes comments about frequent mistakes in posts. Either we use an automated tool to deal with the most common patterns (like in PHP, the eternal "you are not escaping your mySQL data. Use prepared statements or escape your input using ....."), or many mistakes will simply go uncommented.

Possible advantages to having this integrated in SO proper include:

It goes without saying that the comment rate limiting mechanism would be completely unaffected by this.

First off: this script is a fantastic tool. You've done an excellent job with it, to the point where we often recommend its use to new moderators.

That said, I'm becoming increasingly pessimistic toward the notion that handing folks a set of canned comments and expecting them to be used responsibly can work. At some point, it stops being a polite helping hand, and starts being enumerated badness with which to beat people over the head - or used for purposes completely contrary to the original intent. All too often, any attempt to actually help a new user understand the problems specific to their question or answer is abandoned, the canned reason becoming, in the words of ol' Pop Demand, the least they can do.

I think the best example of "canned comments" on Stack Exchange are found in the close reasons: a finite set of explanations for why certain questions must be either fixed or deleted, usable only in one context, and only with the participation of several users. A similar system can be found in the rejection reasons for suggested edits. I would like to expand that into more areas of Stack Overflow, but only when:

Again, I greatly appreciate the time and effort you've put into writing this script, and will continue to recommend it to people I know can be trusted to use it properly - but I don't think it has a place as a general-purpose feature of Stack Exchange.

Update: I'm marking this status-completed. Even though the actual implementation deviates significantly from what was requested, I think the spirit of the request is honored - a set of canned comments, for use on answers in the low-quality review queue, is now built into all Stack Exchange sites. 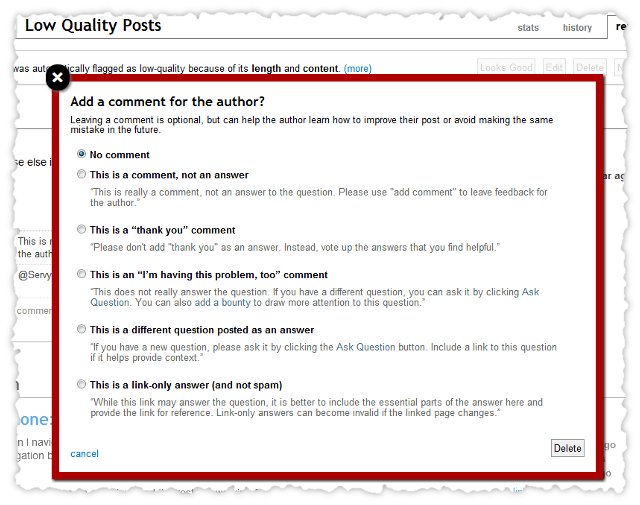 The exact comments offered are based on context:

We may well expand this in the future, to other queues and other contexts.

Currently, the script is installed and used by janitors, flaggers, editors, and moderators who like to keep the place clean. It's easy enough to find if you want it, and I haven't noticed it being abused by comment-spammers.

Making it a rep-based privilege would take it away from some of these users (who work on sites where they don't have 2k rep) and give it to others. Notably, it would remove it from the users who commit to and work to bootstrap SE 2.0 betas, which have many of the same problems and need the pro-forma comments. Any rep requirements should be based on global reputation, not per-site reputation.

I think that this feature should be opt-in, similar to the tag filters. It could be placed at a URL like

I'm cautious about this. If we deploy it too widely too quickly there's a good chance it'll end up acting as a de-facto implementation for signatures and the like. On the other hand, I think there is some merit to making it easier for high rep users to provide well-known, consistent, and carefully worded guidance to new users.

Therefore I suggest they deploy it only for diamond mods first, with a pre-determined list of comments (perhaps per stack exchange site). After a few weeks of mods tweaking wording, then deploy the feature to 10K users (users with enough rep to see the tools links).

4
Should the pro-forma comments script be integrated into SO?
1
Automatic comment for low-quality flagged posts
1
Would it be possible for a user to save a number of draft comments which could be accessible from the Add Comment section?
1229
Encouraging people to explain downvotes
801
Recent feature changes to Stack Exchange
109
Why "What Stack Overflow is Not" was deleted
187
Repository of useful pro-forma comments
55
Can we agree on a review 'policy'?
32
How can the "What Stack Overflow Is Not" post be improved?
44
Treat comments on deleted posts from moderating users like comments from diamond moderators
See more linked questions

67
Should moderators be able to convert answers into comments?
134
Can I please be trusted to not to script a bot that dumps an endless stream of spam messages into the chat?
187
Repository of useful pro-forma comments
40
Modify the 'has 1 or 0 comments' requirement for 'RemoveAbandonedQuestions' script