Like the title says: Should site-specific feeds be tweeting meta questions?

I say no. It doesn't serve much of a purpose, to be honest.

The twitterbot tends to tweet crap in general, but lets assume that it didn't for a second. It would be more worthwhile to tweet something sysadmin related from the main site than a request to blackhole a tag from meta.

If you feel that there is value to having meta posts tweeted, then I think there should be separate twitterbots/accounts for mains and metas.

No, it should not. What value does this possibly add to the site, to twitter, or anything?

For what it's worth I agree with the box (No.)
I don't think new people would be interested in our governance/moderation/tagging/migration/etc. discussions. 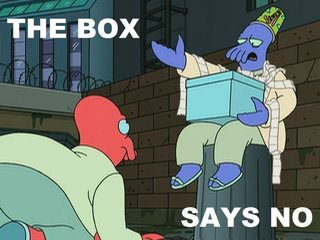 The box is, without question, right in all things including this. This is simply another reflection of the quality of the TweetBot AI. One can only assume it was created by Hastur for punishment.

I agree with the comments on previous answers that the main site and meta have two different purposes. It may be useful to send out Tweets for both, but the tweets should not be mingled in the same Twitter stream.

Tweets from the main sites are public-facing: they are intended to draw users to the site to answer the question if they have an answer, or to read the answers if they need an answer to a similar question. My question is, who is the intended audience for these tweets? Are they only for people already participating on Stack Exchange, or are they intended to draw new users to the site?

Tweets from Meta are public town-hall meetings, but even within that sphere, there are different types of meetings. Cities can have regular bread-and-butter sessions, which are of little interest to anyone not a policy wonk, unless there happens to be an issue on the agenda which directly impacts you. Contrast these with Public Hearings, special issues where input from the Public is solicited on that general topic.

I think it would be useful to separate these Twitter streams, so that those who chose to follow the sites on Twitter could choose which kind of Tweets they wanted to get.

Ideally the only kinds of Meta posts I would like to see included in the main site's Twitter are the public-facing ones, like announcements of events (Weekly Chats and other events, Weekly Topic Challenges, and the like). These could be selected by means of a tag like featured.

I understand the argument of Tweeting the everyday Meta content for those who are already on the site, but I would like to see Meta sites on a separate account, so that the people who want to keep up with the site via Twitter chould choose to read it.

We don't mingle Meta posts with the posts on the main sites -- we have separate areas. There are all sorts of good reasons why not -- and IMO those reasons apply to the Twitter feeds as well.

Sure, this was a specific decision to tweet meta questions, and we had/have reasons for it. Not everyone is on the meta site as much as the main site. The meta site is your community's town hall, the governance. Meta questions, thus governance of this site by the community, could always use more attention. A casual user of the main site may not be aware of what is happening on the meta site, yet posts absolutely affect them. Meta discussions being fair game for tweeting is very much status-bydesign for these reasons.

Not the answer you're looking for? Browse other questions tagged discussion feature-request per-site-meta twitter .

27
Why do site meta questions get posted on Twitter?

1
Should there be a separate site for questions about the “Stack Exchange engine”?
38
Avoid tweeting bad questions
14
Add site specific hashtag to Twitter feeds
93
Can we have a guaranteed pipeline for responses from Stack Exchange?
323
Toward a philosophy of Chat
181
A proposed philosophy of question migration
290
Why we don't keep public records of suspensions
27
Why do site meta questions get posted on Twitter?