How can I make use of excess reputation points?

This is going to sound like #firstworldproblems, but hear me out.

I'm a mod on a beta site, and I'm close to the 10k mark there. While I appreciate the recognition of my contributions, I am thinking it must be good for something else than just bragging rights. Since I'm already a moderator (and I think it's likely I will remain being one), the points don't really mean anything to me. But I know from my use of other SE sites that rep is precious when you've got little.

Sex Rep is like air, it's not important unless you're not getting any.

When I had a few thousand rep points, I began being very generous with bounties on others' questions, but it turns out that doling out bounties is rather a lot of work (review each answer to decide which one gets the reward) for the relatively small amount of rep that I "get rid of" so now I only give bounties for really worthwhile Q&A's.

Besides bounties, isn't there another way to put my excess rep to any good use? 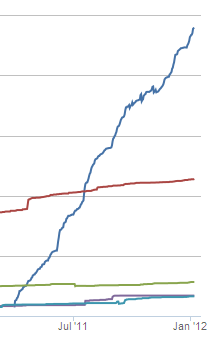 Guess which line in this graph I am referring to? The jagged part of it is where I generously handed out bounties.

You mentioned that giving out bounties is a troublesome task and requires too much effort. To my knowledge the only way to use your rep (besides downvoting answers which wouldn't be a smart way to go about getting rid of 10k rep) is indeed the bounties.

So my solution for you is to: Let the community do the work for you. Find good questions, put bounties on them. You're done. The community will automagically select the nicest answer for you, and then the bounty will be automatically rewarded to the best answer. So you'll be saving some time, except you won't get to hand pick who gets the bounty.

Consider that the site is still in beta phase, which also means the moderators are still the appointed ones; when there are the elections, the moderators will be elected, and it could be the new moderators are not the same as now. Considering that there aren't much users close to be a 10k user, just two users are 5k user, and only one user is close to be a 5k user, what would happen if you are not elected moderator? What would happen if you don't have anymore the time to be a moderator?

While I see the bounties a good way to incentive answers to questions that really need one, I would say that none of your reputation is an excess.

Reputation points are to be compared to grades, not to money. Their purpose is to signal the community how trustful and experienced you are. If they were tradable, they would not have served that purpose. So a significant giveaway is not up for discussion.

What can you do? Since your reputation is so high among your community, you might consider expanding your involvement in this community into new aspects such as blogging, writing a book, or even getting politically involved for your cause.

You are not supposed to give away your reputation. Reputation is an indicator, or a score - it gives information about your activity in this site. In the same way, Mount Everest cannot give away meters - its 8,848 meters are an indicator of its height, not something designed to be spent.

Bounties on popular questions that represent your site, but need improvement, are a fantastic way to "spend" some of your extra rep, if you are so inclined/

For example on Parenting, that would be

If any of those appeal to you, don't hesitate to place a bounty on them with a description of what you think that question, and its answers, need to be outstanding -- among the best of the resources on the Internet.

For more background on this feature, see

How can we utilize the "Greatest hits" list for our sites?

I've done this on Stack Overflow questions that were popular, but IMHO needed improvement, and seen amazing results with bounties in those cases.

25
How can we utilize the "Greatest hits" list for our sites?
4
How can I find questions that are eligible for a bounty?

580
How does "Reputation" work?
9
How can we make SO reputation more realistic
110
What is the daily reputation cap and how can I hit it?
272
How do I audit my reputation?
228
Does Stack Exchange use caching and if so, how?
154
Sudden sharp reputation drop problem: points disappeared and score lost (recalc?)
29
Could we please be a bit less nice to the why-closed-ers?
114
How can we make First Posts review actually useful?
323
How can we help Monica Cellio?