Allow for bounties on Tag Wikis

In part of my, "make tag wikis awesome in 2012 initiative" I am looking at ideas that would improve the quality, quantity and exposure of tag wikis.

In theory, we could allow for bounties on tag wikis. The mechanics are a bit sketchy but the gist is.

Is this a good idea? A bad idea? Waffles?

Edit: Tim Stone's comments conviced me that this (offering bounties) might indeed be worth a shot. But some points in this answer still stand, so I'm leaving it here.

But I'm not sure whether it addresses the real issue: That Tag Wikis (at least to me) still feel like a suburb that isn't connected to the big city's transportation network, living in the shadow of a motorway. People from other parts of the city never see occasion to drive there; if you'll forgive the unfair and polemic comparison, Tag Wikis are a bit like a public library - dedicated volunteers keep it running, everyone knows they should go there to learn stuff, but very few actually do.

I'm not claiming I have a perfect answer for what to do, though. Maybe the tag main page and the tag wiki page need to be fused even more for them to become really prominent parts of the site? The sketch I made for the "portals" suggestion (now sadly gone due to difficulties with the CDN used by the sketching tool :( ) hinted at that a bit. IIRC, what it featured was

I'm a little sceptical about whether the incentivisation introduced by bounties is 100% compatible with the collaborative editing inherent in the tag wikis.

Presumably the mechanics of editing the tag wiki would remain the same when a bounty was in place, by which I mean that the wiki would be collaboratively edited by multiple users? (As opposed to each user being able to propose their own version, as they do when answering questions).

With a fat bounty on offer, isn't there a reasonable chance that the collaborative editing would in fact not be collaborative at all and degenerate into an edit war?

Consider two users, A and B:

I'm not suggesting that we'll suddenly have an epidemic of tag wiki vandalism. It might just be that two users have differing opinions on a definition for the tag and feel strongly enough to "correct" each other.

Meanwhile, other users might be put off from joining in; and the bounty offerer has the difficult task of selecting a winner from the debris.

Therefore I think the ability to flag a tag wiki to a moderator's attention would be a sensible feature if we start offering bounties on tag wikis, so that we can at least police the flurry of editing activity.

I would want to have waffles an option to click Tags, select Featured tab and get to the tag that gives me a chance to earn some bounty for editing it. 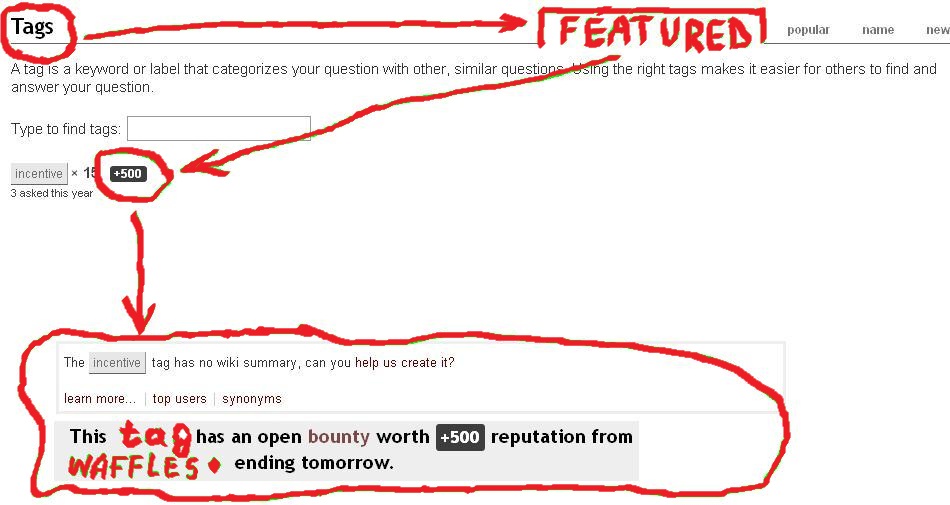 Rather than a "traditional" bounty system where there is a "winner", how about a system that indicates "User X will be awarding ### points to the most useful edits that are made before YYYMMDD." Then, once the edit period is over, that user can assign (or not assign) points as (s)he sees fit to individuals that made edits over the allotted time period.

I agree with @razlebe that the collaborative wiki aspect makes the tag wiki bounty system rather different from the QA bounty system since there isn't really a "winner" or a "best edit". Instead, there is a sliding scale of relative usefulness, and I think being able to dole out the "bounty" in a well-constrained fashion reflects this a bit better than a traditional bounty.

Obviously the level of complexity for this sort of a model is much higher than just a single winner getting an award, but a tag wiki is also (in my opinion) much more complex than just a question/answer.

Not the answer you're looking for? Browse other questions tagged feature-request bounties tag-wiki .