The logo with the space shuttle, the one that tries to imply going up, UP and to the SKY!!!
Is wrong, as the space shuttle program is currently grounded.
Can we change it, may be to one of the Soviet/European space crafts? 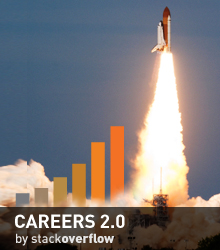 Deferred until such a time when space shuttle launches are not awesome.

The space shuttle program was incredibly successful. It was a design that, with minor modifications, worked very well for thirty years. They had 135 launches and 2 accidents.

When the first space shuttle launched:

The last mission completed 7 months ago.

So, yeah, I think a picture of a shuttle launch can be interpreted as a sign of success.

I don't think the ad works because there is a space shuttle program currently working.

The Area51 drawings don't imply that we are working with aliens... (...right?)

Not the answer you're looking for? Browse other questions tagged feature-request status-deferred careers logo .