At target site, display who voted for migration in order to make it easier for close-voters (alternatively: for 10K users, or for moderators) to contact them. 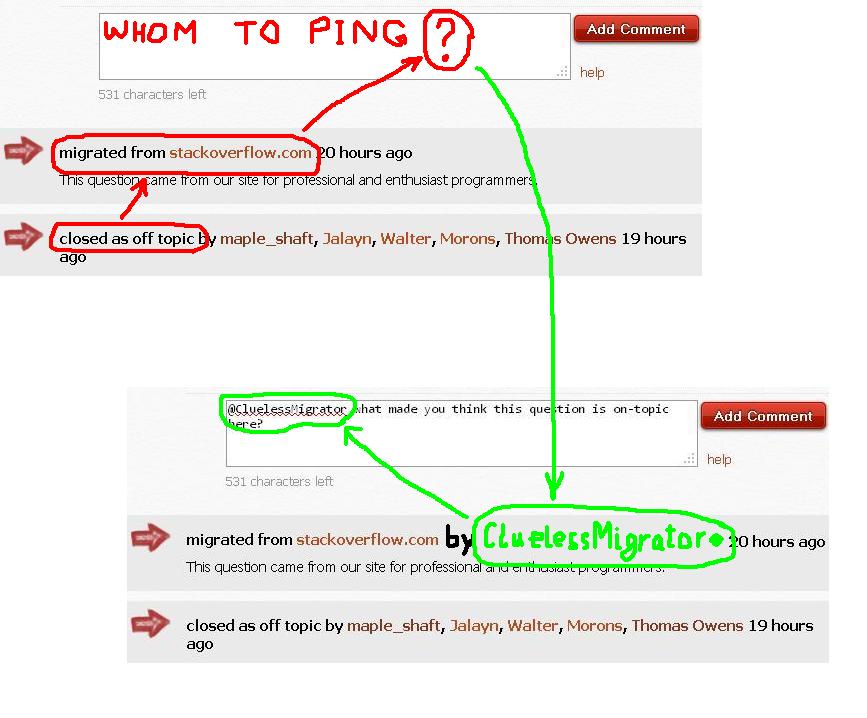 Moderator action on the flag was as follows: "I recognized the problem (another bad migration), but took no action because..." (if needed, refer here for full reply: https://meta.stackexchange.com/a/120987/165773)

I was the one who dismissed your flag as helpful: I recognized the problem (another bad migration), but took no action because the problem won't get solved by reading the riot act to random SO users.

While I appreciate the frustration brought on by our high reject rate of questions from Stack Overflow, individually telling people about the bad migration is a somewhere between "catching rainbows" and "herding cats" on the effectiveness scale. For every one person educated, there are literally hundreds to thousands of people who still don't know the golden rule of migrations, and a non-trivial portion of those people who don't particularly care.

Programmers has always had a bit of an image problem, and the migration path hasn't really helped. But it's not just us: Stack Overflow users (in general) don't even try to understand what's on-topic on the sites they migrate to:

This, unfortunately, is what happens when you let a large community decide for themselves what's on-topic for other sites they don't belong to.

Due to this, in an ideal world, migration paths would just go away, but I have to assume SE has done the math and found the status quo to be good enough for now.

So if we can't turn off migrations, and trying to educate SO users one person at a time is untenable, broader strokes need to be made. Educate and inform through MSO questions about migrations: instead of just sending a comment to 5 people, you reach everyone reading the question. Generally that's good for at least 100 people.

Wouldn't it be better to post over on the originating sites Meta?

The close voters are more likely to see it there anyway, and you can use it as a Teachable Moment™ to inform all the users of the originating site about what sort of questions you don't want sent over.

It's worked for Gaming in stemming what had been a rising tide of bad migrations from SU, it can work for you too!

Dealing with bad questions is never going to go away. I say just vote to close the questions if they're bad for the site and don't harass the users who were trying to help. The question that was migrated wasn't that off-topic anyways, and I edited it to make it more on-topic.

It's not SO's fault that Programmers.SE is a site about software development, not programmers. The site name is misleading. 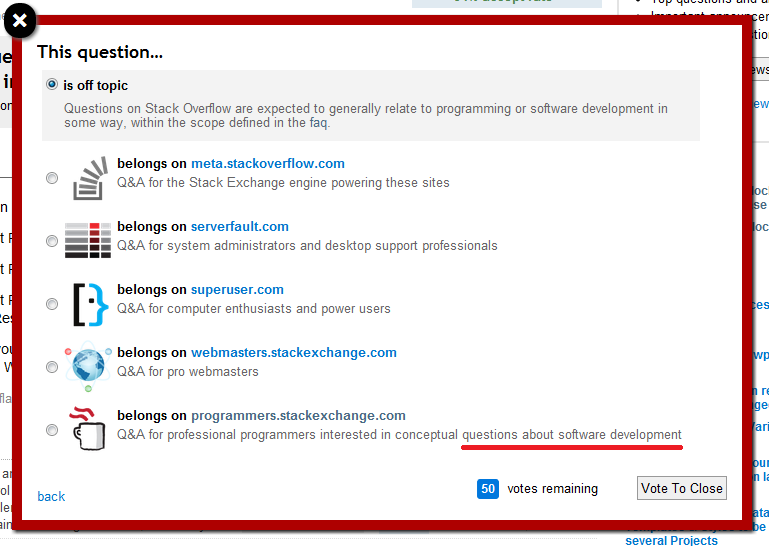 Not the answer you're looking for? Browse other questions tagged feature-request migrated-questions .

56
Provide direct feedback for rejected migrations
683
How do comment @replies work?
114
Please stop using SoftwareEngineering.SE as your toilet bowl
190
Who are the diamond moderators, and what is their role?
63
Allow diamond moderators to reverse question migrations?
42
Please don't migrate low-quality questions to other sites
61
Require minimum reputation on the target site for migration
18
What's the deal with migrating CSS questions to Webmasters?
21
Block migrations suggested by users with a poor track record (AKA, "inverse migration 'flag' weight")
15
Automatically inform users who took part in a bad migration
See more linked questions