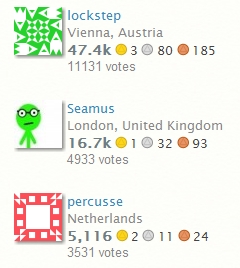 EDIT: Picking up casperOne's suggestion: as an alternative, one could show only the most significant digits of votes/edits numbers with at least four or five digits — e.g., my votes number would be displayed as 11.1k votes. (The exact number could be shown in a tooltip, as is done for five-digit reputation numbers.)

While it's true that on Stack Overflow (and the majority of the Stack Exchange sites) we've standardized on English (using the premise that it's the language of the Internet, a premise I support), that doesn't mean that the countries where English is primarily spoken are the locales of the Internet.

The convention you are proposing is a convention of locale, not language, and has many different representations around the world. For example, there are many places where the comma is used as the decimal mark instead of a decimal point.

As another example, the representation of the hour of the day is a locale convention as well, and we've standardized on UTC, which is locale-agnostic (even though it may align with certain locales at certain points).

This leads to the question of what the locale of the Internet is (or, what will most people understand)? We've already identified one part of it (the language, which is English), and I believe that the other parts (time of day representation, and numerical representation) are probably better off being as neutral as possible, in order to have the broadest possible reach (which is the point behind English being the language of the Stack Exchange sites).

Yes, adding commas as thousands separators would improve readability, and they are already used elsewhere on these English-language websites.

Not the answer you're looking for? Browse other questions tagged feature-request user-interface markdown users-page .

272
Do posts have to be in English on Stack Exchange?
32
Should the network use thousands separators in numbers?
11
Add thousands separator to numbers in the Badges and Tags sections
8
Tag counts should have commas for readability
1
Number-format on number of questions tagged in each tag

259
Add the ability to ignore users
23
What's the deal with color-coding of comment votes?
412
Decision on rejected edits should be displayed as a notification to the editor
32
Should the network use thousands separators in numbers?
391
Add an “I don't understand” option for review audits
9
Confusingly displayed arbitrary hotness points
574
We're switching to CommonMark
15
Display number of votes by <15 rep users to poster