It has been 6 months since the Facebook-StackOverflow partnership and mini-site were launched. Is there any data that can be shared publicly about whether the Facebook mini-site has been a success or a failure?

To me, it has generally felt like there has been little, and now dwindling, support from Facebook employees. Most of the questions seem to get very few views or answers, and are mostly from 1-rep users who don't return. There are large numbers of problem questions, including off-topic support questions (probably because Facebook doesn't offer much support to their 800 million users besides a FAQ).

Even the two small statistical items that are published on Facebook's weekly "Operation Developer Love" (a terribly misleading title, since Facebook doesn't love its developers) are bad (31% answer rate, 48% reply rate), especially compared to the site's average of 81% answered. But this is where statistics from Stack Overflow's side would help.

The data do seem to show pretty clearly that the answer rate for Facebook-tagged questions is astonishingly low and that the participation from Facebook employees has dwindled to almost nothing. We plan to bring this up with the company at the next possible opportunity, and encourage them to live up to their "developer love" motto. We'll also build a few simple reports that we can share with them to track progress in this regard.

I say yes, absolutely. The influx of low-quality and off-topic questions as well as the declining level of contribution from the Facebook Development team means that the users of Stack Overflow are getting the short end of the stick.

Note, this is different from whether or not Stack Exchange as a company is getting the short end of the stick; we don't know exactly what goes on behind the scenes, so there may be money/incentives involved which make the cost worth it to Stack Exchange.

My recommendation would be to revive the Facebook Developers Area 51 proposal and then start migrating questions in that direction.

Then, we can retire the sub-domain on Stack Overflow as well as put to bed a bunch of Facebook sub-domain related issues (like this one).

A quick follow-up to Joel's answer:

Joel, Alex and myself met with Don Faul and Charles Dowd of Facebook last week, to discuss ways in which we could work together to improve developer relations.

We expressed the concerns laid out here: that questions aren't getting answered by Facebook, and that the (lack of) documentation makes it difficult for anyone else to answer them.

They've pledged to make a real effort to getting more questions answered on Stack Overflow, both by increasing the answers posted by the developer relations team at Facebook, and by working to keep the documentation more up-to-date. We may also do some sort of SO dev <-> Facebook dev meet-up in the future, to help familiarize their engineering team with how participating on Stack Overflow can help developers gather feedback on their work.

All of us agreed that a big part of the problem is the large number of low-quality or straight-up off-topic questions posted to facebook. Some of this is unavoidable - as traffic increases, so does noise; fortunately, Stack Overflow provides everyone with the tools to help clean this up. Some of this has been due to the ease of use of SO in contrast with Facebook's own support forums (combined the occasional lack of clarity on Facebook's end as to what actually belongs here). They're going to work on providing better support options for questions that don't involve programming.

My gut feeling is that Facebook is in a situation today somewhat similar to Microsoft in the early to mid '90s: a popular, fast-growing platform, with documentation and support for developers lagging behind. It took a while, but Microsoft caught up - by making developers a priority, even as their income came from sales of Windows and Office. Facebook needs to do the same.

Finally, thanks for holding our feet to the fire on this. Those of you who are active in the [facebook] tags are the heart of this community on Stack Overflow - if you're feeling slighted, overwhelmed or powerless to effectively moderate your own community, fixing that is a huge priority for us.

Until someone from Stack Exchange Inc. or Facebook says something here is what I was able to pull up.

You can see the data here 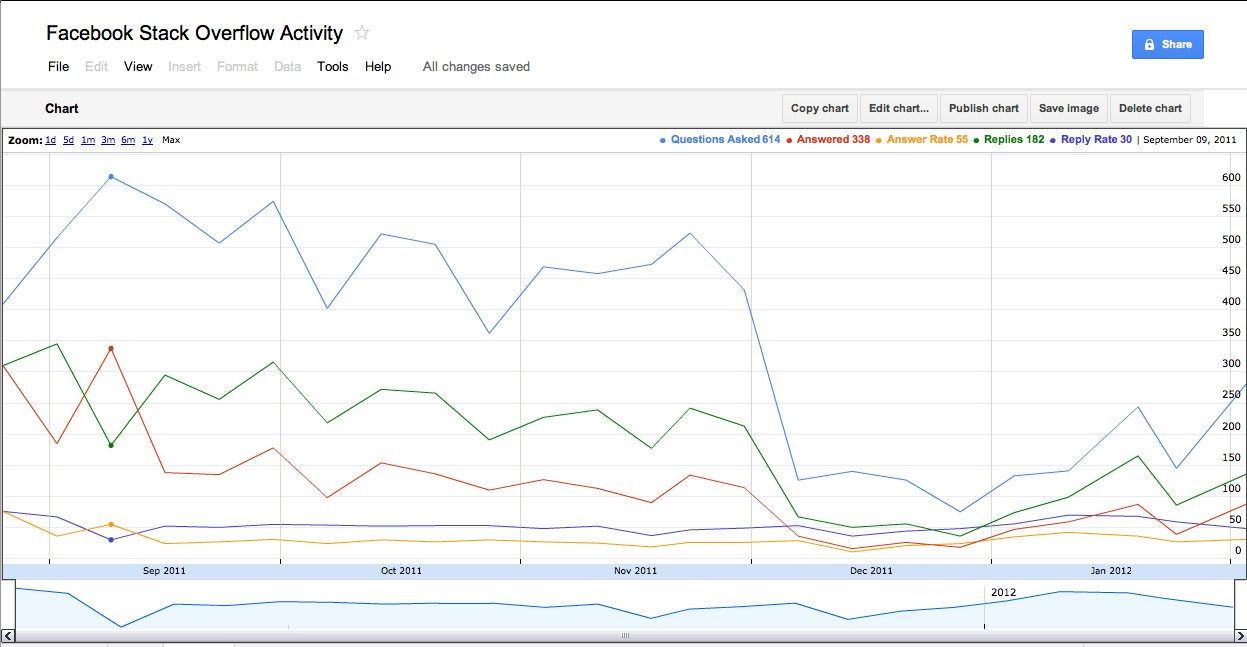 With respect to the users themselves I don't how best to quantify other than looking at their acitivty tab.

Igy is by far the most active of the bunch, but any more data such as number of consecutive days at the site will be up to the SO team to release.

Looking at the Graph alone, there is not much going on except a steady decline despite the December holiday period.

received a reply from a community moderator or a Facebook employee

Now there are formatted as

There is now no indication what percentage of this reply section is indeed Facebook Developer Relations Team. But, in the end it's all speculation off of incomplete data. Though at the current stance I highly believe there needs to be a stricter policy/guidelines set in place for this community.

I tried creating a separate proposal as well a Facebook Chat Room (now frozen/deleted?) in the hopes of getting the attention to an area solely surrounding Facebook but unfortunately Area51 is a different beast to understand; the proposal was closed as a duplicate with the reasoning

This proposal would tend to drain audience from an existing Stack Exchange site.

So how does it drain from the proposal while at the same time shows to be overbearingly low quality, low views and low votes? Hmmm, not sure (see first sentence).

The primary problem here seems to be the quality of questions being asked by new users. I believe this may be due to how easy it is to set up an account here when coming from Facebook. As I understand it, if you have a Facebook account, it's a one-step process to create a matching account on Stack Overflow.

I hate to suggest making something more difficult for new users, but what if we removed this fast-track process for creating an account based on your Facebook one? Right now, it's easier to ask a question as a new user when coming from Facebook than from anywhere else, and I believe that this is allowing for more drive-by users to ask terrible and off topic questions. It only takes a little effort to create a new account through other means, and someone who really wants a question answered will still overcome this minor obstacle.

I have noticed a significant drop in the number of terrible questions coming in since we started requiring an account to ask questions. Perhaps raising the bar slightly for new users coming from Facebook would similarly reduce the number of off topic questions being asked in the related tags.

Well surely that's up to the Stack Exchange overlords to do, not us as the community.

Regardless of whether there's a business relationship or not between SE and Facebook, we as the SO community should be carrying out our activities in a "business as usual" manner by "taking out the trash" and hopefully educating new users on how best to participate in our sites.

Just because Facebook don't throw much "developer love" at indecipherable "I haz cnt my like buton to wrk?" questions doesn't mean they don't care. In fact they cared enough to move developer support to Stack Overflow because we as a community are awesome and for two main reasons

As a moderator I see some truly awful posts that surface there but our community votes and flags them to oblivion and this is good. This is why Stack Overflow is successful, because it shuts down the vampires and the folks who never give back, the Facebook subsite/tag isn't really any different from the Android or iPhone tags. Trust me.

Just because facebook.stackoverflow.com has the backing of Facebook doesn't really change how our community moderates. Crap is crap, get rid of it.

I'm new here, but, in regards to the original question, I think that the answer is "yes" but only because this experiment is deeply flawed. Just admitting that "FB is like Microsoft in the 90's" or any other company shows that your experiment isn't very generalizable.

Facebook reneged, but that doesn't mean others will. Hell, even if 10 companies had failed, just means you haven't tried varying other options. Even if whatever super-set of features you offer (like admin control of displayed topics in the sub-site) turn out to be a really bad idea, it's trivial to shut down a sub-site because it's just a filter tag + minor UI tweaks.

Sub-sites would stop the snowflaking of SO into a multitude of sub-quality mini-SE sites and the number of failed experiments in Area 51. If a sub-site turns out to be large enough or a company wants more control of the experience (and is willing to pay SO HQ for it) then push it into Area 51 and (eventually) an independent SE site.

Finally, this would address the scaling problem SE has in regards to new expert users. Rep inflation distorts the consensus approach and it sometimes feels like you are getting piled on by well-intentioned but mis-informed users.

Not the answer you're looking for? Browse other questions tagged discussion status-completed facebook.stackoverflow mini-site .

55
Any chance of Stack Exchange blacking out Jan 18, along with Reddit and Wikipedia in opposition of SOPA/PIPA?
37
Stack Overflow and Facebook Policy Matters: On-topic?
45
Encouraging users to create an account (and keep it)
38
Was there an expectation that Facebook employees would help with their mini-site?
22
Is there any official Google support in Stack Overflow?
6
Google App Engine support moves to SO
12
Can we have a facebook.stackoverflow mini-site moderator election?
18
Stack Exchange Community Statistics results: Which questions are the least frequently answered?
38
Close as “Exact Duplicate” does not recognize links from Facebook sub-domain
10
Why is the Facebook mini-site occasionally showing all Stack Overflow questions?
See more linked questions