Under the tools menu, how should I read the post feedback information?

Note: post feedback page has been removed and will no longer be available

For users who have access to /tools on any site, the bottom of the list includes a link to anonymous and low rep post feedback for what I presume to be questions on the site. However, none of this information contains metric labels or an explanation of meanings or methods for the end-user.

Basically, I have no idea how to interpret the information I'm seeing here. 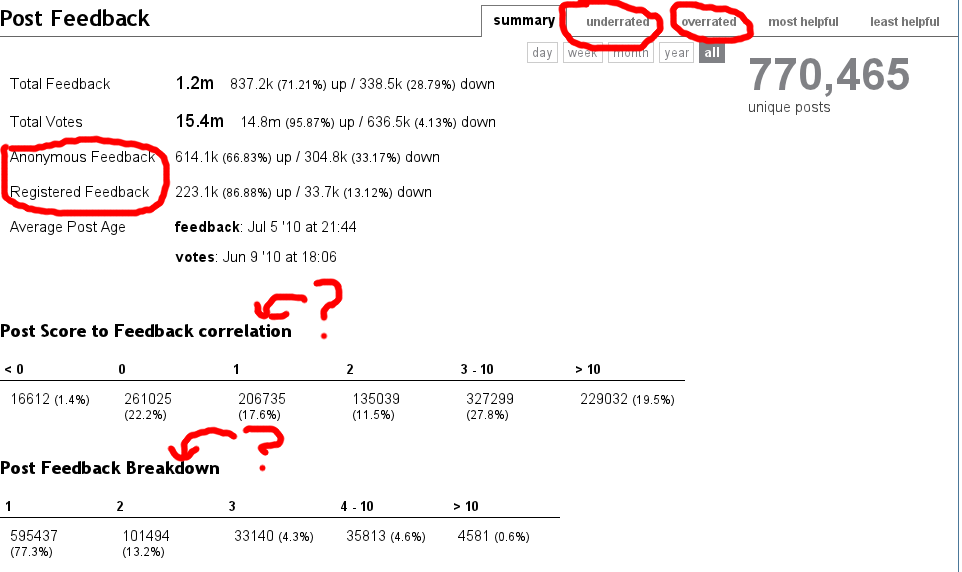 What makes a post underrated or overrated and how can I "fix" that?

As for "fixing" this, it often requires cleaning up answers that have been marked helpful and then upvoting them. Theoretically, moderators and top users are working to improve and upvote helpful posts, and downvote unhelpful posts.

How should I interpret the differences between anonymous and registered up/down feedback?

The differences between anonymous and registered feedback is just to see if drive-by users are finding posts helpful, since they can't vote otherwise. And I guess to see how many anonymous users are taking advantage of the feature, since I think it was developed specifically for them

What does the post score to feedback correlation chart thing even mean?

The top row is the post's net score (that is, net of up and down votes), and the bottom row is how many posts with that score have gotten feedback (I think). So 16612 posts with a negative score have gotten feedback. Correlating post score and feedback lets you see how good the site is at voting; posts that get the most feedback are probably the most useful (they're at least stumbled upon the most), so they should have the most votes. It seems to count both positive and negative feedback equally though, which diminishes the usefulness a bit -- posts with highly negative feedback shouldn't have high scores

Not the answer you're looking for? Browse other questions tagged support 10k-tools .

487
How does deleting work? What can cause a post to be deleted, and what does that actually mean? What are the criteria for deletion?
6
Navigating pages in 10k post feedback clears date range filter
7
Is the count of anonymous feedback available in the schema?
62
Question flags, queues, edits, roomba, community♦, how does this actually work?
89
New 10K tool: question close statistics
286
Under what circumstances will Stack Exchange, Inc. share private/sensitive information with the press?
175
Under new processes, Monica's removal should complete the Conduct Review, not request Reinstatement