Is it more difficult to earn reputation on SO than couple of years ago?

It seems that all good questions that could be asked have been already asked. Also it seems all good answers that could appear have already appeared. Existing questions/answers base probably covers most of the programming topics. And, therefore, it is more difficult to ask an interesting question that bothers everybody than, for example, couple of years ago when SO was comparatively empty. Do only I get this feeling or not? Are there any metrics for proving/disproving that it is more difficult to get more reputation on SO as time passes? I want to get rid of the feeling that all questions have been asked and answers have been already answered.

UPD: Maybe Jon Skeet would be great candidate for the experiment of getting statistical data about SO reputation dynamics? We can track dynamics of his reputation over the last (two) year(s). Maybe it could tell us much. Is there any right way to get such data easily?

UPD2: Here is some info about Jon Skeet dynamics: http://stats.blogoverflow.com/2011/08/does-jon-skeet-have-mental-powers-that-make-us-upvote-his-answers-the-effect-of-reputation-on-upvotes/

I don't know how its been for everyone but if you examine this query Jon Skeet he has been receiving more votes per week with roughly the same number of posts.

This of course doesn't really mean much since some of this is money from jam and it only correlates posts and votes. Not effort and votes 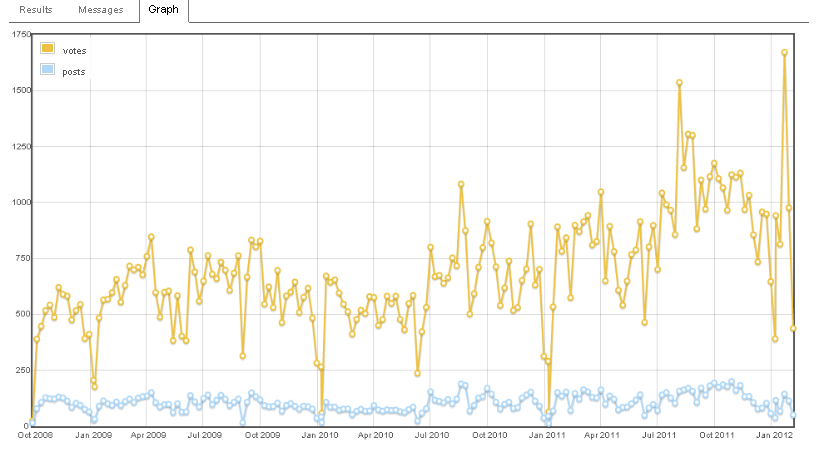 There are still some diamonds appearing from time to time.

I agree that over time, there is general decrease in votes - not the total votes, but "votes per question".

As the tools and programming languages themselves keep evolving, people will always have new stuff to ask so in my opinion "all good questions that could be asked have been already asked" is not the real reason for the decrease in votes.

I think the real issue is the overwhelming amount of questions, and major part of them are junk. It's just too hard to wade through all the junk to find the good questions.

When Stack Overflow was younger, there were much fewer questions asked so the "hard core members" could read them all and quickly upvote the good ones. Now going through all new questions is a full time job. Nobody can do it anymore.

Jeff has done everything in his disposal to fight this and improve the quality of the questions, but in a place so big it's mission impossible.

Bottom line - yes, it's harder to gain reputation from questions but your main concern of "all questions have been asked and answers have been already answered" can be dismissed in my opinion and is not the reason for this difficulty.

It's indeed more difficult to earn reputation than a couple of years ago.

No, this is not caused because all questions are already been asked. They are still asked. It's just caused because there are way much more users who you have to "compete" with.

I myself was previously more active in [java] tag, for example. But these days I can barely enter a complete answer to my satisfaction, or I see the orange notification bar and I see that someone else (often more than one!) has already posted (and gradually edited) an answer along the same lines and even already received a bunch of votes on that. So I just press Ctrl+W at that point.

Well, try finding a "niche" tag where you're really good at and continue there. You can just post answers on questions which have not received answers for hours, so that you can take the precious time without hassling to be the FGITW. For me, that's among others [jsf]. I don't earn much reputation per post on a daily basis, most answers have 0 or 1 votes and rarely reach 2, 3 or more votes per day. It are the accepted answers which counts and reputation earned by votes on one of those >10K old answers.

I think this will depend on the areas that you frequently ask and answer questions in. For more established, slower-moving topics like languages ([java], [c++], etc.) it might be harder to find good questions that haven't been asked yet, or compete against faster answerers. However, I believe there are plenty of opportunities to earn reputation in niche or more rapidly evolving areas.

In mobile development, the frameworks and operating system features keep changing on an almost monthly basis. Every time something new is added, there are plenty of new questions that can be asked about fundamental aspects of this technology, or common problems that people face. Adding definitive answers can rack up a lot of votes for you.

For example, within the iOS arena, Apple rolled out a new language feature called Automatic Reference Counting (ARC) in mid-June of 2011. Within a few days, people were asking all sorts of questions in the automatic-ref-counting tag, and any good answers were receiving plenty of votes. In ~8 months, I've received 219 upvotes on 21 answers just in that narrow tag, with the best answer sitting at 73 upvotes by itself. This happens every time Apple updates something. Despite this, many of these questions can sit for a day or more without a good answer because of the lack of people with experience in the new thing.

Beyond rapidly moving areas, there are plenty of niche or more technical questions that are sitting there unanswered. While these may not get the views of simpler or more common questions, I've found that they can have very long tails for voting activity. I have answers that I provided three years ago still earning votes as people stumble across the same obscure issue I posted a solution for.

Looking back at my own personal history over the last ~3 years (since I joined in September 2008):

Despite being more selective with what I answered starting in early 2010, I still see an acceleration in reputation earned. If 2012 keeps up the pace from the first month and a half, I'll earn 28000 points by the end of the year. This is despite never having hit the reputation cap a single time due to votes.

Much of this due to a combination of the two factors I describe above. The answers I've provided in more technical areas accumulate votes regularly over the years, and the few questions I've answered in hot new areas have led to some large vote counts. As the popularity of Stack Overflow grows, I imagine the number of votes from these areas will grow as well.

In the end, though, you should just focus on providing quality content, both in questions and answers. While the imaginary points act as a fun motivator, what's really important here is the act of helping out both current and future readers.

I agree with you that it is harder to earn reputation now than before (I haven't been using SO for that long, but long enough to see something)

I don't think its as much that the good questions have already been asked. It's not like there aren't any advances in the technological field. New stuff will come out and there will be more questions to ask about such and such.

I think the problem with SO and reputation as of now is its users... Theres so many of them. Its not the users fault, but theres so many questions being asked on SO that one hardly has time to spot out a good question, and because there are so many questions, most questions receive ALOT less attention than they should.

Questions hardly have any time to get peoples attention before they are on page 5. I think something should be done about this... Like maybe a holding area for questions, and allow questions to be asked and maintain their spots on the website for a while before, after a period of time, new questions are added on the page. So this would stop the page from being full of way too many questions...

Not the answer you're looking for? Browse other questions tagged discussion stack-overflow reputation .

7
Is it now impossible to build a reputation on Stack Overflow?
-19
How is Stack Overflow going to handle reputation in the future?
4
How much of a high-rep user's rep comes from previously answered questions?

902
Why aren't people voting for questions?
576
Exit strategies for “chameleon questions”
697
Your answer is in another castle: when is an answer not an answer?
2780
A Terms of Service update restricting companies that scrape your profile information without your permission
826
Net Neutrality and Stack Overflow / Stack Exchange
487
Congratulations to our 29 oldest beta sites - They're now no longer beta!
2440
Firing mods and forced relicensing: is Stack Exchange still interested in cooperating with the community?
394
Swag is coming back!