Careers ad shows caged toddler without access to food or water, in reach of open shoes

Here is the ad: 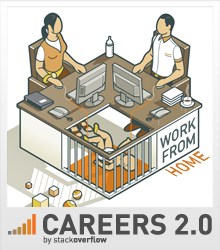 Some (including myself) have found the ad to be somewhat offensive (it's quite weird to say the least). Though I recognize the symbolic nature of the ad (staying at home yet working at the same time), the baby looks quite old (especially to still be wearing diapers).

What's worse is the fact that this ad seems to convey that children can be ignored while parents are occupied with something else (very poor timing considering Jeff Atwood's farewell notice).

Not only that but the child is right next to (what appears to be) the power cables for the two PCs - a serious electrical shock hazard.

Could we maybe make some adjustments to the ad?

We took the ad down. Thanks for your prompt feedback. To that end, do you have any creative ideas that we could use?

As a father of (the world's cutest) 2 year old little girl, I have to say that I didn't find the ad offensive in the least. It's fairly obvious what the point was, and it was cleverly executed. Though I did find it pretty inaccurate. Working from home with a child in the house is simply impossible if you're any kind of responsible parent.

If you really want to get the work-from-home point across, and have it appeal to developers, tweak the ad and have a guy sitting in his boxers on the couch, with a laptop in front of him. Who the hell wears a tucked-in polo shirt when working from home? That was the only potentially offensive part of the ad.

Not the answer you're looking for? Browse other questions tagged discussion careers advertising .

4
Weird Work From Home advert
35
Didn't we stop kicking the baby in the ads for Careers?