Can we have a moderator only "flag for community team/developer attention" link on posts?

There are times when moderators come across things that only Stack Exchange employees can deal with. These include things like deleting sensitive information permanently from posts disassociating users from posts that require direct database access.

Currently the workflow is:

A far better workflow for the moderator would be to simply able to flag the post so it then appeared in an "employee only" queue somewhere. This could either be a page on the main Stack Exchange site or (better still) their inbox.

(OK I admit I hadn't fully thought this last bit out.)

This could either be a moderator "flag to devs" link on the post or a new option on the existing flag dialog (probably the better solution).

Now that moderators can't merge we have a fairly common situation where this would be very useful. A new users posts an answer (or question on sites that don't require registration) then loses their cookies and ends up creating another unregistered account (or two). Eventually the might even create a registered account. It used to be easy to merge the unregistered accounts into the registered ones, but now we either have to badger the OP to use the "merge accounts" form or ping the team somehow.

Having the "flag for team" option would be very useful in this scenario.

Note: The tool has been updated, and now looks like this.

Not calling this complete just yet, but we've added something toward this end: 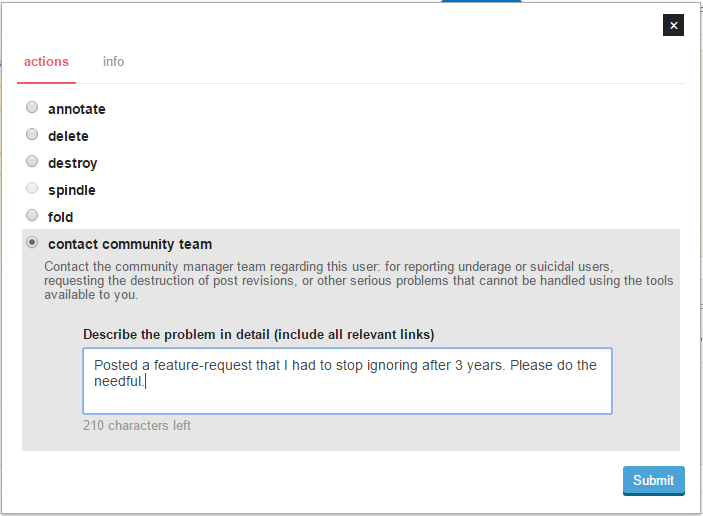 This is available from the "mod" menu on user pages, and generates a ticket in our internal queue that'll look something like this:

You can use this for any issue that requires our oversight, provided you include the necessary information in the freeform text field. Our community ops team will handle or assign the ticket as appropriate.

If we need to follow up, we'll do so via the contact email on your profile. In most cases, this should not be necessary.

Contacts are logged in the user history of the person you're contacting us about, to allow oversight by other moderators on your team.

Depending on how it ends up being used, we may expand this functionality in the future or kill it entirely and blame you.

Special note on the deletion of sensitive information

Note: This information is no longer current. There is now a moderator revision redaction tool, which should be used instead of this process.

In the past, we've handled requests to delete sensitive information (passwords, etc.) from posts by hard-deleting revisions. This was... a bit dangerous. Henceforth, the team will handle these requests by altering each problematic revision in-place; an annotation will be added to redacted revisions to allow for moderator oversight:

These are currently visible only to moderators, and the actual data that was redacted remains inaccessible to everyone. Combined with the new "contact" UI, this should allow for considerably less overhead.

As a reminder, when requesting the removal of sensitive information:

Ok - let's examine some of the issues that require mods to contact SE right now, things which are inappropriate to bring up publicly on meta:

I agree that chat is a lousy tool for these most of the time. It's pretty good for discussions, advice, and very time-sensitive things, but more and more of these requests end up being things that should just go into a queue.

Also, a lot of them are things that should be automated in some way once they reach a certain scale - vote-fraud comes to mind; merging too, to some extent. Chat has a nasty tendency to obscure the volume of such requests. Also, stuff gets ignored or lost...

I hate the flag idea mostly because I think of flags as being fairly light-weight. If there's a lot of context or research that's gone into a problem, distilling it down into a flag can be troublesome. They're good for the sorts of fairly obvious issues that crop up a lot on a site, things where the primary goal of communication is just to draw someone's attention to something... But if moderators on a site are unable to handle those sorts of issues, the site needs better tools, better education, or... better moderators.

My personal preference is to use email for complicated stuff that isn't particularly time-sensitive. You do get a queue of sorts, as well as the ability to convey a lot more information - in both directions.

Email has its own problems, but the simple solution here is to just add a "contact SE" link to every mod menu that collects information about whatever problem has cropped up and emails us. But that could just as easily feed into something on-site as well, which may give more flexibility for issues with different priorities.

As the number of sites and moderators continues to grow, we'll have to introduce something different to maintain effective communication. What that'll be depends largely on what we all need it to accomplish.

You keep forgetting about the rumored existence of a universal moderator-only chatroom forged by unicorns! I can say that that does and doesn't exist... element of surprise...

Jokes aside, contacting a mod isn't that hard in chat. Pick a chatroom, private if necessary, and ping a developer. If they've never been in that room before/they are unpingable, mods are given a superping, which would add it directly into their inbox.

Even with a flag for CM feature, this is what it would take:

Okay, the last one is a little bit of a stretch, but pinging all of the devs and CMs for an account merge is complete overkill. For the account merge, all you need to do is contact a developer yourself in chat (with the method described above) and ask them for the merge.

32
Can we get a more efficient way of contacting the team?
8
Add a contact community tool for Moderators?
-15
Mod only tool for posts that mention suicide
139
Allow moderators to hide a revision
44
A more efficient way to contact community managers
63
Show both sides of the conversation on-site when a moderator contacts a CM
64
Let's have a formal way for mods to contact the Community Team about suicidal users in chat
48
Provide explicit moderator tools to deal with sock puppets
15
As a moderator, what should I do to merge users?
13
When to redact revisions?
See more linked questions