Should duplicate standards be different on meta [duplicate]

Possible Duplicate:
Duplicates of an outdated question
Within limits, can duplicate questions be safely asked on meta?

Should we necessarily close a question on meta if it's a duplicate of a question asked years ago?

Stack Overflow has change a lot in the last few years, and I think it might occasionally be useful to start certain discussions anew.

The question to which I'm referring is this one, which is a duplicate of this one

I know the usual argument is that you can just post a new answer to an old question, but I'm not sure how helpful that really is. The old question will likely be filled with old, possibly out-of-date answers, and it's entirely likely the old-question OP is long gone.

And to preempt any dirty little straw men, no, I'm not saying people should get to start new threads every day about the "pr0blem filter" or stripping the @, etc. I'm talking about things that may have been asked in another era—2009—and since forgotten about.

Should we necessarily close a question on meta if it's a duplicate of a question asked years ago?

No, not necessarily. If something's actually changed in the intervening period of time that would suggest that the conversation would somehow be fundamentally different if posed now than it was originally, it stands to reason that a separate, independent question might be a good choice in some cases.

However, this is often not the case for bug reports like the one that you've used as an example. While it's true that there are occasionally site changes that give cause to review previously dismissed bugs, in most situations the circumstances surrounding the issue were the same then as they are now.

Though it's possible that the original report was forgotten, I'm inclined to believe that it's really just remained a non-issue (otherwise, there would have been consequences). You could argue that if that were the case the original question might be sporting the infamous status-bydesign tag, but I don't feel that that's strictly necessary.

Granted, the two top answers on the original question do make light of the situation by using similar techniques to the one reported to give "joke" replies. But even those replies, along with the others, still highlight two important points:

Based on that, I don't see any reason not to close as a duplicate given that this new post doesn't really bring - to borrow from what Won't said - anything new to the table, and I apply a similar reasoning in the more general case.

I'm not a big dupe-close-voter... Unless the dupe doesn't bring any value to the table.

The accepted route is to go to the original and place a bounty on it. 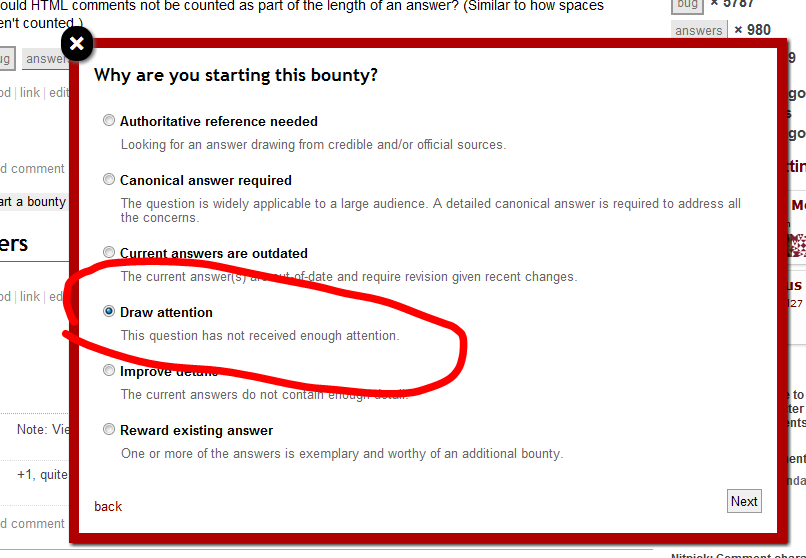 Meta rep is pretty useless. Its just proof that you can freehand circle like a boss. Best to spend every ounce of it on the proposals you want.

Think of it this way: We have fifteen different proposals which cover almost the same ground and that have 2-3 vote each... or we have one proposal which has been edited to add more detail or to clarify and that has 45 votes.

Which is going to attract the most attention?

Not the answer you're looking for? Browse other questions tagged discussion duplicate-questions duplicate-proposal .

5
Duplicates of an outdated question
2
Within limits, can duplicate questions be safely asked on meta?
14
Add an option to include a drop shadow to images posted
-6
Should users be able to circumvent the minimum character limits by adding HTML comments to their posts?
0
Should HTML comments be stripped when validating answer length?
7
Duplicate-closing should be harder on meta to encourage the evolution of discussion and opinion
-7
Define “Duplicate” in the context of meta

1058
Should 'Hi', 'thanks', taglines, and salutations be removed from posts?
265
How should duplicate questions be handled?
2
Within limits, can duplicate questions be safely asked on meta?
437
Reward finding duplicate questions - +10, +2, -5
325
Stack Overflow is getting a Meta of its own
342
New UI encourages askers to confirm or dispute duplicate votes
486
Congratulations to our 29 oldest beta sites - They're now no longer beta!
2444
Firing mods and forced relicensing: is Stack Exchange still interested in cooperating with the community?
577
We're switching to CommonMark