Historically this site, meta.stackoverflow, has been the place to ask questions about not just Stack Overflow, but the functioning of the entire Stack Exchange (2.0) network, including Area 51 and stackexchange.com and careers.

(Yes, there was a meta.stackexchange, but that dealt with the old legacy Stack Exchange 1.0 sites. It was deprecated a while ago, and currently redirects here.)

Now that we've gotten many, many months under our belt from the SE 1.0 days, I think it's time that we gave Stack Overflow its own, true per-site meta, and moved the higher level network meta discussions to meta.stackexchange.com.

It's also odd that Stack Overflow is the only network site without a proper, dedicated per-site meta, where its meta has its own reputation system not tied to the parent site in any way.

This is mostly a quirk of history more than anything else, and I believe it is now an appropriate time to split into two sites:

Yes, this will be painful. But I believe it is a good, necessary, and healthy step both for the future of the network and the future of Stack Overflow.

Some things to discuss:

I do not have a timeline for this change, that is up to Jarrod and David to decide. It may be months away. However, we feel pretty strongly that this is something that we need to do to clean things up and pave the way for the future -- so I expect it will happen in the next few months, giving us lots of time to decide how we want to do it, per the above.

This will be proceeding in January 2014.

This is excellent news and I've been waiting for this to happen for quite some time. However, I do see one huge problem that will need to be addressed in some way:

Google has indexed millions (well, hundreds of thousands anyway) of pages here on Meta that have been around for years. Suddenly switching this site with Stack Overflow's new Meta will result in a lot of invalid links in addition to dead ones. I realize there are ways to deal with this, but it is still a concern.

A lot of per-site Metas (and Stack Exchange sites themselves) link to policies here on Meta. They will all need to be updated. That could be a job for the API or the Data Explorer. But it won't happen overnight either.

Yes, finally a site where network issues won't be buried in SO-specific considerations!

You're proposing to rename meta.SO into meta.SE, then re-create meta.SO. I don't think that's going to work. Meta.SO is currently very much dominated by Stack Overflow. If it's renamed to meta.SE, there'll be a lot of cleaning up to do, and we'll end up with a meta.SO that's missing a lot of specific material and with a meta.SE full of SO-specific crap. It won't work that way.

Instead, we should create a meta.SE and follow the organic growth process used for Stack Exchange sites, with a few modifications. Start Meta.SE in read-only beta, but instead of writing posts from scratch, migrate them from meta.SO and edit them as necessary.

Choose the read-only beta participants based on participation on sites other than SO. “Anyone with a diamond anywhere” might be a good start; if that's not enough, bring in people with enough both MSO rep and non-SO-or-MSO rep.

After the read-only beta, make Meta.SE a migration target on Meta.SO.

Since all Meta.SO posts will either remain in place or have migration stubs left behind, all existing links to MSO will remain valid, thus not repeating the link carnage when Meta.SE-1.0 was moved out of the way.

I took a sample of MSO posts to see what we're up against. I only looked at 4, not a statistically significant sample but that's all I'll spend the time on (feel free to contribute). The sampling method was to draw a random integer uniformly between 1 and 124015 and visit https://meta.stackexchange.com/q/$n (try again if the post is deleted).

I mentioned this when I was asked about it, but I'll reiterate my message here:

The "official" update on this is that the Meta.StackExchange project is currently on hold while we focus on other priorities. The earlier-stated reasons of limitations based on technology and current know-how still apply. We apologize for the inconvenience and hope you all continue to be patient with us as we work towards making this project idea a reality.

Here's my main concern with this change:

This sets up a situation where many (most?) network-wide changes are proposed and discussed on the new MSO anyway because they'd be allowed (since they'd naturally affect Stack Overflow) and they'd get the most attention (due to Stack Overflow's disproportionately high traffic compared to the rest of the network).

So, in effect, the only functional change is that people who are active on Stack Overflow get higher reputation on the de facto network-wide meta discussion site and everyone else gets relegated to second-class meta citizens (since they're visitors to Stack Overflow's child meta, even though what's being discussed would affect all sites). Meanwhile, the de jure network-wide meta discussion site (MSE) would be the place newbies who aren't in the know go to have their issues and suggestions ignored.

Using stackoverflow to determine which questions should go to which site after the split is a good idea, but I'm afraid the tag is applied too inconsistently for that to work out in practice.


This is especially true for MSO's oldest questions: the ones that were asked on SO before MSO existed, using the tags sofaq or stackoverflow. Back then, questions about the network and questions about SO were basically the same thing (which, of course, is why we're in this situation to begin with).


More recent questions are also affected. Those that are specific to SO, perhaps because they're about particular questions or users, often don't get tagged with stackoverflow. This is most likely because infrequent MSO users don't even know the tag exists. The reverse is also true. Many meta questions (both SO-specific and network-specific) get asked on SO and migrated here. Sometimes they bring along the stackoverflow tag; sometimes, the stackoverflow.com tag; sometimes both; sometimes neither. It may also be helpful to consider the tags specific-question and specific-user when deciding where to send questions.

Edit:
Just had a new idea: set up a special, one-time-only review queue to prepare for this split. Every existing MSO question would go into the queue. The queue prompt would be "Which site will this question belong on after the split?" Options would be "MSE" for questions applicable to the whole network, "MSO" for SO-only questions and "Neither" for questions that just ought to be deleted (plus, of course, "Skip").

I think there are few enough questions on MSO that the existing bloc of too-involved MSO users would be able to knock out such a queue in a few days, even if we required multiple agreeing reviewers. Or maybe this only seems like a good idea because it's the middle of the night and I can't sleep.

"we all'd love to see the plan"

This is going to be quite a challenging "fork", would be very interesting to see how it finally works out.

For a start, I would probably move everything from here to network-wide meta (meta.stackexchange), thus leaving SO-specific meta essentially empty. Of two sites, SO-specific meta sounds like a new site to me - that's why I expect it will be less shocking for visitors to see little content there in the beginning.

This sounds simple, but besides such a bold move, one would have to decide on what to do with moved content that actually belongs to SO-specific meta and how to handle outside links pointing to content that is currently here.

There seem to be quite a lot of stuff worth being at SO-specific meta rather than on network wide one. If we start by moving everything to SE meta, this content would better be "moved back" somehow. I think that relatively painless way to accomplish this is by using well known, tried and true migration process. This would spread needed effort more or less smoothly between community members and allow to do the change in a gradual, controlled manner.

To easier "move back" substantial amount of posts like suggested above, most likely off-topic flag/close screens would have to get SO-specific meta as a new dedicated target option. Currently, these screens do not have such an option and per my observations this makes a process of migration from here to per-site-meta somewhat cumbersome. This is likely OK now while this happens infrequently, but if there will be a lot of stuff to handle, it will become a pain in the neck. 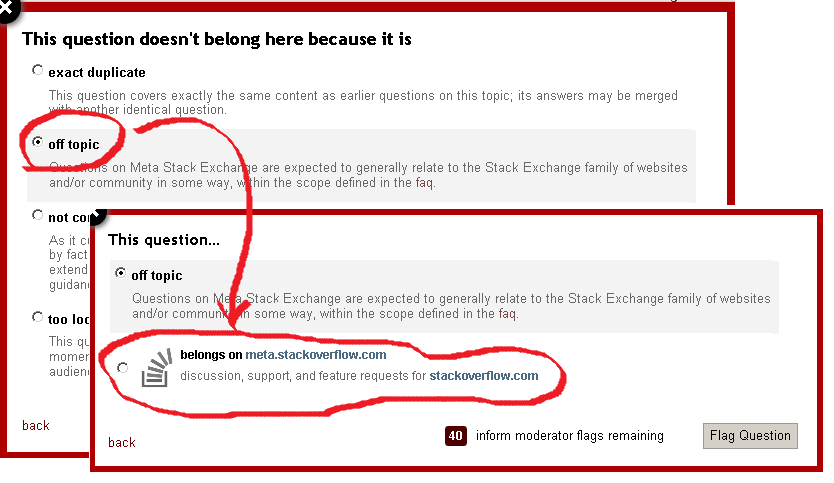 Straightforward moving of the content from meta.stackoverflow to meta.stackexchange would leave quite a lot of outside links to current content invalid. To work around this, I would consider introducing cut-off IDs. 1

All the after-fork content at the SO-specific meta could have IDs starting from one that is guaranteed to be larger than any content that is currently here. This way, any 404 Not found URL pointing to meta.stackoverflow and having ID smaller than cut-off, could be automatically assumed as pre-fork one and re-directed to respective URL starting with meta.stackexchange.

With cut-off approach like above, pre-fork posts moved back from network wide meta to SO-specific one, could keep their "historic" IDs, thus again keeping older outside links from becoming invalid.

This won't be totally painless but changes like that probably can't be done without some pain anyway.

If meta.SO becomes a regular meta, for Stack Overflow issues only, then what'll happen to bounties?

Unless I'm blind, I don't see a place to open a bounty on an old question in meta.literature (where I have > 700 rep). I assume this is the way SE metas usually are?

Starting bounties with worthless meta rep is a cherished tradition on the current meta.StackOverflow, and I'd really hate to see that go.

And I just have to ask: are SO-specific posts like tag synonyms really buried under SE-generic clutter? Just yesterday the fantastic moderators around here handled my burnination request with extreme expediency and extreme prejudice. I fear this might be a solution in search of a problem.

Would a less intrusive, more convenient way to handle this transition be to leverage the "child site" facility currently used by Facebook.Stackoverflow? Why not do some DNS trickery and get meta.SE to redirect right here, and then change meta.StackOverflow to be a child site showing SO-specific content. Then the work would "just" be a matter of re-tagging so-specific stuff to have the appropriate stackoverflow tag.

Not the answer you're looking for? Browse other questions tagged discussion status-completed mso-mse-split meta .

1754
Could we please be a bit nicer to new users?
320
Stack Overflow is getting a Meta of its own
310
Operation 'Split, All The Metas!' Shall Commence On April 16, 2014
523
The MIT License – Clarity on Using Code on Stack Overflow and Stack Exchange
2753
A Terms of Service update restricting companies that scrape your profile information without your permission
820
Net Neutrality and Stack Overflow / Stack Exchange
336
Let's take a look at the interaction between staff and the “power users” of the network
2254
Firing mods and forced relicensing: is Stack Exchange still interested in cooperating with the community?
1868
Stack Overflow is doing me ongoing harm; it's time to fix it!
468
To reach out: on Monica, the Lavender community, and the future of the Stack Exchange network