Please don't exploit the memory of the deceased to promote the network.

That's really all I have.

The following is a description of what happens a week ago.

Steve Jobs died in October. He would have turned 57 a week ago.

They organized a "party" at the NYC Apple store "to honor Steve Jobs on his birthday" and announced it on the same day just 5 hours before the event on the pretty inactive Meta.Apple.SE site.

Come join Ask Different and Dr. Brendan for a party to honor Steve Jobs on his birthday. The party will start around 3 pm EST, and will take place outside the flagship Apple Store in NYC (59th Street and Fifth Avenue).

There will be black turtlenecks, cupcakes, and dancers. For more information, see this New York Post article covering the event. This event was also covered by CNBC this morning, so we're hoping for a great turnout!

If you can't make it to the event, we will be live tweeting it from @StackApple, so follow along!

This was originally tagged site-promotion, but that was removed later. 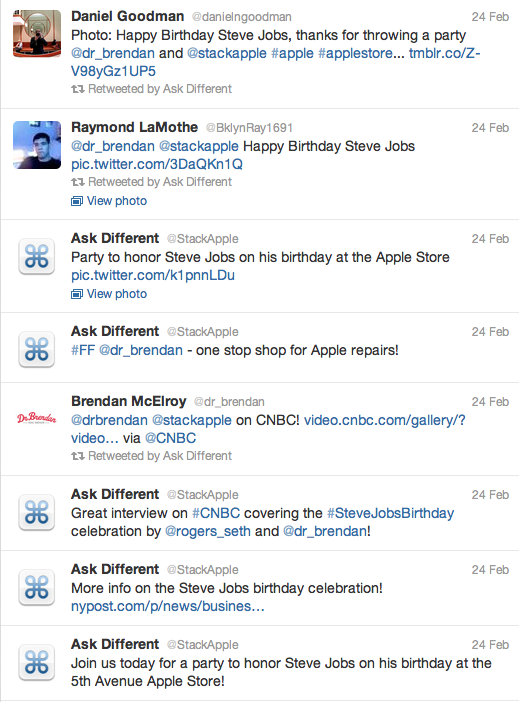 The images referenced look like this, and unfortunately don't show the crowd at the event: 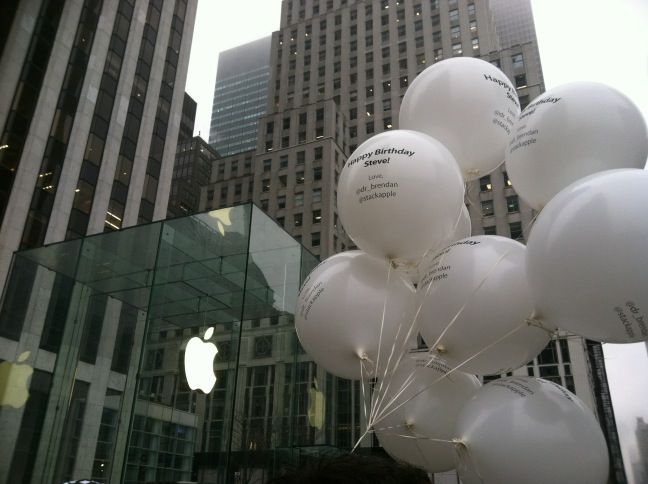 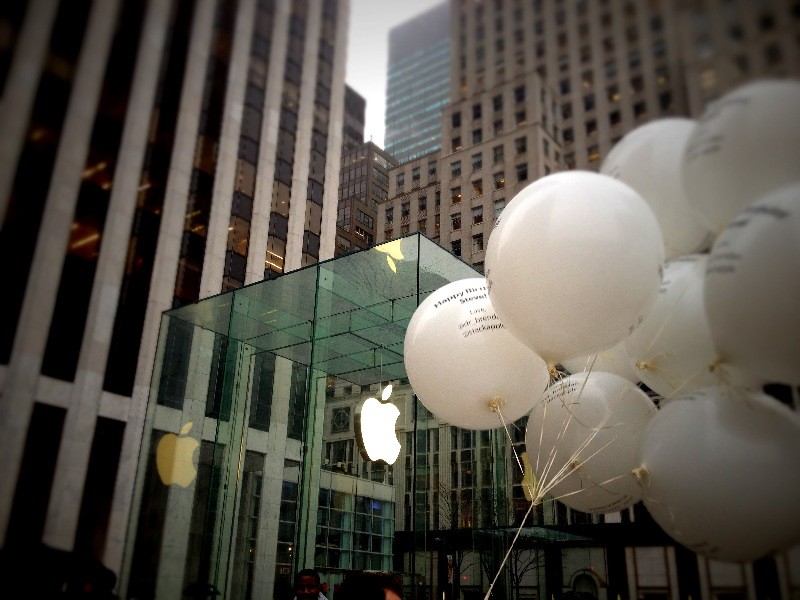 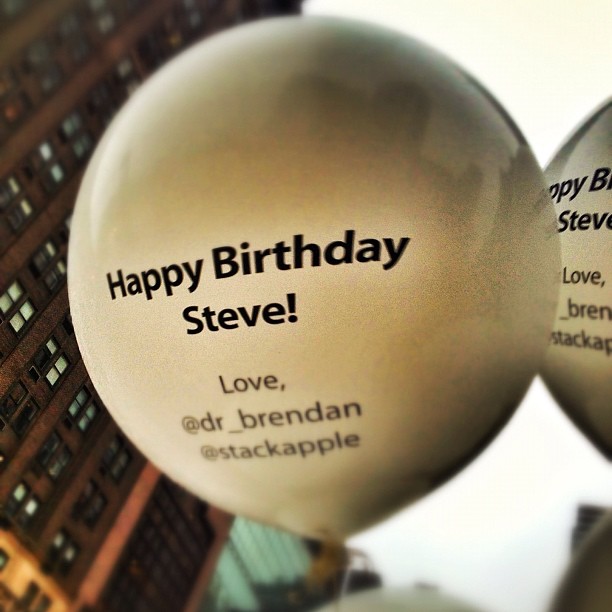 The CNBC announcer mentions that the Dr Brendan guy and the SE "community development manager" were "two of his biggest fans". Unfortunately, the two CHAOS members involved in the announcement haven't bothered to participate on the site they're apparently trying to be promoting so far (1, 2), which doesn't exactly help their credibility in doing something like this.

Given that they apparently aren't that big fans (based on the contributions and interview), and didn't care at all whether any active users of Apple.SE actually showed up (given the late, relatively hidden announcement), all that's left is a PR stunt using the birthday of a dead person to promote two businesses (which that person wasn't even involved it).

Please don't do that.

Nobody disagrees that the Ask Different moderators should have been contacted prior to the event, and Seth or Lauren will continue this conversation with those mods directly. This event was a strange situation because it was canceled originally, but then un-canceled at the very last moment. As such the channels of communication got all thrown off. This is totally our fault.

There are, however, a few points about CHAOS in general that I think need to be made very clear, in response to the original question and to phwd's answer:

All that notwithstanding, the most important point to take away here is that it is our policy to discuss things we do that affect the community with moderators in meta or chat. This particular event fell under the radar, but it will be followed up on with the Ask Different mods.

Seth, Lauren and I have had a chat conversation with Daniel and the Ask Different moderators. We understand that a large part of the community feels that this event was in poor taste and we recognize that one of the reasons it seemed that way was because there was very little public communication about it in advance. This was not our intention and it is not something we intend to repeat. The point is taken and the lesson is learned.

We cannot undo the event or go back and change the way it was handled, but we can learn from the mistakes that were made and make sure they don't happen again.

Mmm this isn't the first time this (the act of not giving adequate notice to at least the moderators) was done.

Putting aside the Steve Jobs comment, what I see here is misrepresentation of the Ask Different Community. Here is what I think should be done for next time

For example, this should have appeared on the balloons and notices,

Moderators have been told more than once that they are not allowed to utilize the Twitter accounts ( Would allowing moderators to update their Stack Exchange sites' Twitter accounts improve visibility and offer more value? ) yet we see it done here instead of it coming from @stackexchange or @stackhq where CHAOS normally operates from.

I have not read the entire CNBC interview because to be honest it felt like a plug for Stack Exchange, though based on what @Lauren said here,

The CNBC interview is all about what big fans Seth and Brendan are of Steve Jobs - they only mention Ask Different to say where Seth is from. I think it's a very tasteful interview, and we don't intend for this to be an excuse for a promotion.

Without going for pitchforks and inspecting Seth's profile

Not to call out Seth he may have good intentions when saying he was from Ask Different but his public face on the site does not count for much and it just looks bad. This gets back to the whole getting notice to moderators in advance so they can step in the interview or at least be mentioned by Seth.

Who is @dr_brendan and why is there a promoted tweet for him, this looks like conflict of interest from the outside. Sure, have an interview, say you are best of friends but the moment you mention

You are going down slippery slopes. You have officially endorsed @dr_brendan on behalf of Ask Different that's a no-non seeing that most of Ask Different doesn't even know who he is. (This goes back to informing mods in advance)

So in summary for next time I suggest,

Other than that I think it was a good opportunity to promote Stack Exchange not an exploit on Steve and CHAOS is still learning, so no pitchforks this time.

Contact Moderators in advance! All of this would have been averted if you did.
Why is it so hard for you do that?

In response to point 1 Abby T Miller raised she is missing the point of what I said.

*Don't say you belong to Ask Different and you are an Apple fan in same sentence. I don't care that you don't have time but it's a lie to say you are from Ask Different. You may have an account there. I have an account on Cooking you don't see me running around saying I am from Cooking. Because I am not, I just have an account there. This is about representation and you don't represent Ask Different to put bluntly. If you were an actual fan you would have the decency to inform your fellow Appleboys about it. This isn't about deeply being involved but shoot at least something... and if not get advice. To me it looks wrong in every way possible, you say you are big Apple fan you work for Stack Exchange know about Ask Different yet you don't contribute. And you cannot count those meta posts, that's your job*

I sat down and listened to the interview now. How can you think up an idea,

well, seth and i got together and just -- you know, we were brainstorming ideas for a fun event to have for steve jobs' birthday. and, you know, we just kind of came up with the idea of, you know, handing out black turtlenecks.

And have Ask Different fall under the radar in notice. That just doesn't make sense. Don't play with words, you are leaving out the community and moderators out of these brainstorming session for reasons unknown to me and it's not by accident.

... Something at Stack Exchange and Ask Different we take that inquisitiveness ... it's really part of our culture

So Seth didn't explicitly say he was from Ask Different but the "we" instead of "the community" goes along way. Nevertheless I will play down the contribution issue.

So I guess that's how the whole cancelled/not cancelled problem appeared.

So this event should have never been un-cancelled. You make moderators jump through hoops to get their promotion proposals to SE Inc. yet SE employees can wing it??!!!? Screw that.

In response to point 2 you fall in your own trap.

The goals of CHAOS per-each-site are a subset of each moderator. Moderators are unpaid evangelists for Stack Exchange because they invest heavily in their site to make sure it is seen and is high quality. The only difference here is that CHAOS has tools and resources readily available to accomplish the task, moderators do not.

There have been numerous occasions where moderators would become confused as to who promotes their site only to be redirected to some template answer by Comm Team about "Moderators can promote if they wish and get the community to help out, if they need more help they can ping CHAOS to see what they can do" The thing is you never know when CHAOS is assigned to your site, so you cannot depend on them unless you are booming with traffic or reaching critical mass.

If something actually occurred on Twitter that a moderator/community member did not like, the solution occurs after the damage. So I don't see how it helps anyone.

So you want us to promote but unofficial so it does not tarnish the name of SE. Ok get it, thus we end up as second rate versions of the Official ones where most users think the official accounts are where it's at only to see walls of bot text instead and the occasional once in a lifetime real person update

The point here is CHAOS is failing hard at communication with moderators, this is not the first time, it's not the second time, this has happened multiple times and the community would like to help out but you are not making that very easy to do

Not the answer you're looking for? Browse other questions tagged discussion support site-promotion .

222
Dennis Ritchie goes into the night without a quote on Stack Overflow?
59
Would allowing moderators to update their Stack Exchange sites' Twitter accounts improve visibility and offer more value?

743
Which tools and technologies are used to build the Stack Exchange Network?
148
Please do not use Stack Overflow to promote social causes
526
How to avoid “Hot Network Questions” on the sidebar
375
Updating the Hot Network Questions List - now with a bit more network and a little less “hotness”!
353
Let's take a look at the interaction between staff and the “power users” of the network
483
To reach out: on Monica, the Lavender community, and the future of the Stack Exchange network
93
Please don't bring The Loop to per-site metas
197
The Follow Questions and Answers feature is now live across the Network
62
Join me in welcoming Valued Associate #820: Shodipo Ayomide