Ask Question
Asked 9 years ago
Active 7 years, 8 months ago
Viewed 1k times
80
This question already has an answer here:
Use the new helpcenter for the question/answer ban message (1 answer)
Closed 7 years ago.

When users receive a question ban they see a message that links them to a post on meta in the faq tag.

I would like to put forward the hypothesis that this is the way most of the users who post blatantly off-topic questions on meta find meta in the first place.

If this is true then hosting that link anywhere other than on meta would go a long way towards cutting the volume of "I got banned so I asked it here instead" questions that meta sees.

Proposal: the link question banned users see should be hosted on the site the ban relates to itself, not on meta. The text of that message could link to meta still, it's a layer of additional indirection.

Rationale: The people who post these questions clearly don't read the contents of the message, it seems like the thought process runs approximately as "I'm banned, but what a stroke of luck - another Q&A site, I'll just ask there, someone is bound to solve this for me". This would remove the "another Q&A site" aspect and make reading the text the only option.

It's hard to say for certain that this is indeed the cause, questions of this nature get deleted quickly and it's not possible to do more than guess if a user is indeed question banned. (I would give example of these questions, but I can't see them once they're deleted on meta and I think it's fairly obvious what the sort of questions I'm referring to are)

I think this hypothesis could be tested (by a developer) with something like change point analysis on the number of closed+deleted off-topic questions after making the change.

I can't quite believe I'm the first one to suggest this, but searching for this mostly just turns up thousands of duplicates of the "Help I'm banned" questions.

The error messages have been updated and should now link to the help center articles about question bans and answer bans, respectively.

I believe it can be added to the faq of every site, one picture is better than thousand words: 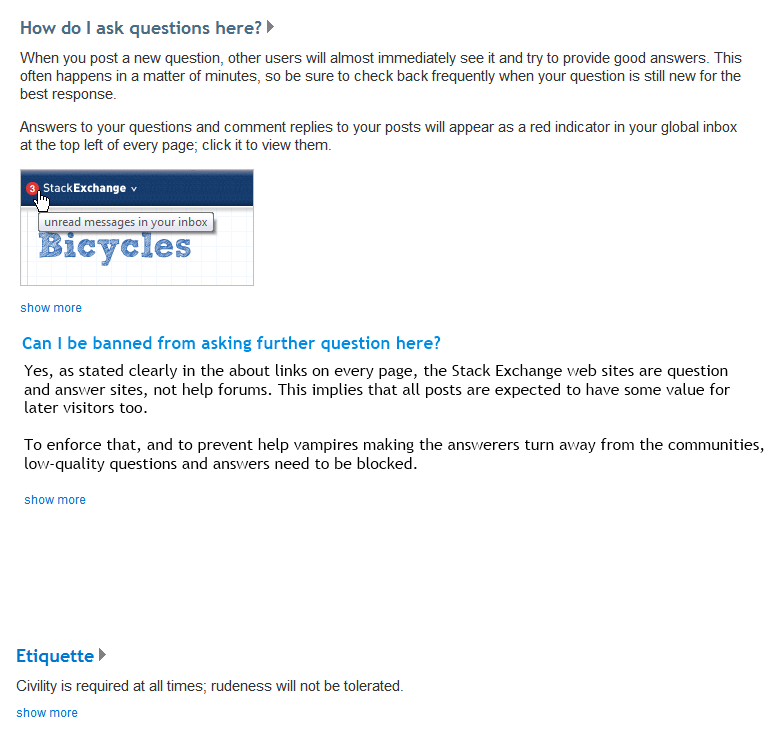 In the "show more" it can refer to the infamous Meta post and the ban message can link directly to that faq section e.g. https://stackoverflow.com/faq#banned (That will show it expanded by default)

What would go a long way towards fixing the Why was I banned posts is that everyone banned is given a specific message telling them exactly why they were banned, and a few specific suggestions for how they can get unbanned. This could all be automated, just like the process to ban is now automated.

Made up example (not sure of all the algorithmic stuff behind the ban):

If you want people's behavior to change, you need to give them very specific information, so they can modify their behavior without having to guess. This is especially important for those from different cultures who may have a hard time figuring out from non-specific english sentences how to accomplish their goal.

I've provided some rough data on the scope of this problem here.

To that, I'd like to add that folks who post programming questions here on Meta after being q-banned on SO are generally suspended here, usually for a fairly generous period of time. There are currently 52 suspended users here.

The more I think about this, the more I dislike the idea of putting this in the FAQ, or on some other disconnected page. I have two reasons for this, one philosophical and one practical:

Remember: q-bans are intended as a safety net for the community on Stack Overflow - an automated way to keep the folks who are habitually abusive and inattentive from continuing to waste the time of those here to help. It's not a warning system, or training wheels, or purgatory - there may be a place for such things, but this isn't it. It's a shame, really, that such a thing is even necessary - but the alternative is (and was) worse.

Not the answer you're looking for? Browse other questions tagged feature-request status-completed meta off-topic post-ban .

47
Use the new helpcenter for the question/answer ban message
14
Move question ban FAQ page somewhere else
255
What can I do when getting “We are no longer accepting questions/answers from this account”?
143
Remove the shortened URL from the Post-Ban-Message
80
Missing: “Meta/Chat/FAQ” from top navigation. Reward offered
38
Convincing the community: Should we rephrase the post-ban faq?
13
I think Stack Overflow should convert to Catholicism so that we may have Purgatory
44
Minor change in the “ask it on meta” recommendation on the right of the “ask question” page to avoid confusion
16
How many people are asking SO questions on Meta because they're question-blocked?
-9
Meta-Meta SO - Is letting access to all a good idea?
See more linked questions

955
Show all of my question/answers to me even if they are deleted
255
What can I do when getting “We are no longer accepting questions/answers from this account”?
384
Send authors an inbox message if their question is closed
1224
Don't throw away all votes when a user is deleted
179
Get rid of the question ban on Meta; suspend actively harmful users manually
324
Stack Overflow is getting a Meta of its own
306
Moderators should be able to manually ban users from suggesting edits
713
Dear Stack Exchange: a statement and a letter from your moderators